Sunk in a dark mood and wanting to retreat from reality, last week I began vaguely recalling signs I’d seen for old fallout shelters. I set off through St. Paul to find them, on my way to the Minnesota Historical Society Library to research the history of public apocalypse preparation. My first idea was to inspect the old walls and doorways of St. Matthew’s Catholic Church, on the west side near my apartment. It was a bust, as was my second idea, the half-demolished carcass of the Ramsey County West Government Center buildings on the bluff of downtown St. Paul. No fallout shelter signs to be found there, though there was plenty of graffiti and neglect.

The third time was the charm. Rounding the corner toward the Xcel Energy Center, I spotted a sign perched above the old entrance to Roy Wilkins Auditorium: the yellow-and-black sign declaring FALLOUT SHELTER, distraught with age but still clinging to the brick remnants of the old doorway. The sign, now 50 years old, is a horrifically wonderful remnant of a dark time in American history, when eschatological preparation so imbued the public mind that it had entered the basements of our buildings. Considering President-elect Trump’s open discussion during the campaign of “never, ever” ruling out using nuclear weapons, these grim signs, invented and manufactured in St. Paul’s 3M factory, might have an important story to tell.

As far as I can tell, the American public fallout shelter program hit its stride in 1961, as the U.S.-Soviet standoffs over Berlin and Cuba brought the world to the brink of nuclear war. In response, the U.S. government under President John F. Kennedy, through a freshly funded World War II-era Civil Defense Program, began accelerating the public fallout shelter program, efforts to identify, mark, and supply spaces for people to bury themselves in the event of all-out nuclear war. Digging through the archives at the Historical Society archives, the trail of paperwork — Civil Defense Shelter Management Manuals, Shelter Construction blueprints, procurement schedules, and even a map of a fictional “Gopher County” Minnesota depicting an imaginary post-fallout planning scenario — traces a bureaucratic trail of dystopia. 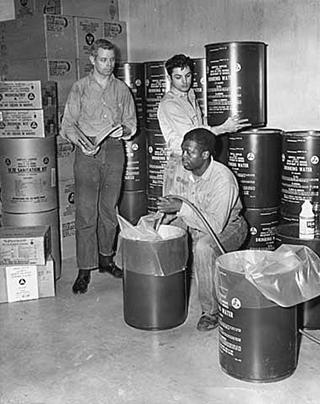 Courtesy of the Minnesota Historical Society
Students preparing for nuclear war in the fallout shelter at
St. Casimir’s Church and School, 1962.

According to the papers, by 1962 Minnesota had ostensibly identified enough public fallout shelter space to house about 39 percent of its 3.4 million population, though the quality of these spaces was hardly uniform. Conveniently enough, the only official public shelter directory in the library is for St. Paul, and it boasts a long list of shelter spaces that includes many downtown buildings, parochial and public schools, and a few factories. For example, the State Capitol complex supposedly had shelter enough for over 18,000 people (e.g. 9,227 in the Capitol Building, 8,837 in the basement of the what is now the Department of Transportation). About 1,302 people could have sheltered in the Hamm’s Brewery, and almost 2,000 in the various complexes of Saint Casmir’s Church on the east side. The St. Paul auditorium, where I found the sign, was supposed to have housed 3,150 people in its basement fallout shelter. (The building also had the honor of hosting backyard fallout shelter display models, as part of the 1962 “Home-a-rama” show.)

The city’s two largest public fallout shelters, however, were the Montgomery Ward building (31,287) in the Midway, and the 3M factory complex on the east side. The 3M factory could supposedly have housed 28,061 people with two weeks of supplies. Imagining tens of thousands of people holed up in the 3M basement reveals a grim paleo-future, half  “Doctor Strangelove” and half Fritz Lang’s “Metropolis.” Simply consider the bathroom situation. In its collection, the State Historical Society retained some of the materials from shelters in Stearns County, including one large water drum (manufactured in Beaver Dam, Wisconsin), first used to store drinking water, and then used for waste. There is also a kit for a “chemical toilet” seemingly made from cardboard. (For the rest, you are welcome to use your imagination.) 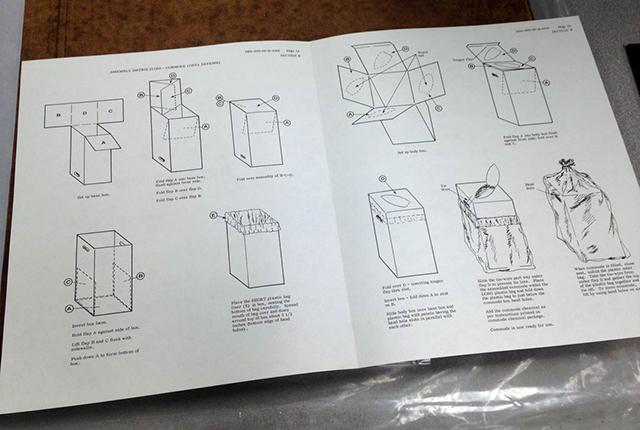 MinnPost photo by Bill Lindeke
They thought of everything.

At least to my 21st-century eye, government fallout-shelter documents go into startlingly myopic detail when describing signage. Under “signs and procurement,” the 1962 Manual declares:

All “FALLOUT SHELTER” signs will be Government-furnished. While their format will be uniform, two types are being designed; one of a material suitable for outdoors, the other for indoors. Procurement will be central and will be based on requirements estimated by field agencies during Phase I. In general, at least one sign will be needed outside each facility which contains a public shelter. This will identify the facility to the public.

Later, the manual provides further detail of its material — aluminum with a “reflectorized surface” — and its size — 14 by 20 inches, with 1/8-inch screw holes.

As it turns out, the 3M plant would have been an ironically fitting place to bury yourself amid fallout, because, according to an obsessively detailed Cold War history website, the factory was where all of the nation’s 400,000 fallout shelter signs were manufactured. According to Adam Scher, the senior curator for the Historical Society, in the 1940s 3M began developing special reflective “glass bead” signage technology. And the fallout shelter signs — at least when new — have a remarkably modern look, their “reflectorized surface” having become refined and ubiquitous in highway signage today. 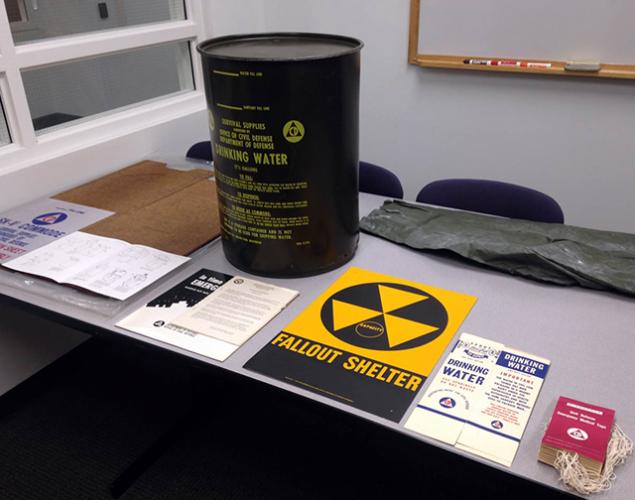 Courtesy of the Minnesota Historical Society
Everything you need in case of apocalypse.

While the Historical Society’s Fallout Shelter sign might look new, the ones that remain hanging on St. Paul’s old walls are showing their 50 years of age. These faded remains can be a bit tricky to find, but hunting for them offers a fun exercise in urban observation, like post-apocalyptic Pokémon Go. Here are some simple steps: First, the building must date to the early 1960s, preferably an institutional or government building of some kind, though this is hardly a requirement. Second, the building should have been neglected, left vacant or unremodeled. Finally, focus on the secondary or back entrances, in alleys or near dumpsters. You want to look in places that are a bit off the beaten track, where fresh aesthetics have not yet swept away the past. 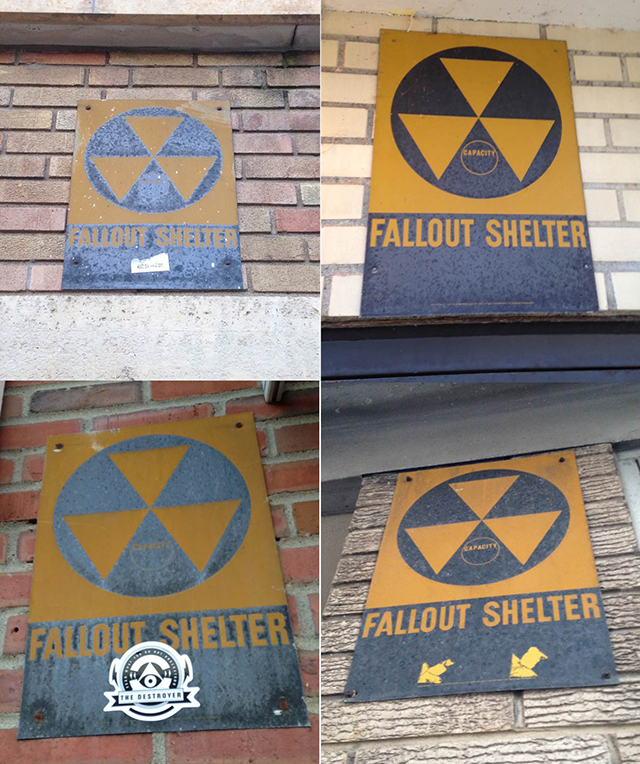 (For example: Though I haven’t checked it out myself, I’d bet money that you’d find a fallout shelter sign on the old Minneapolis Armory building.)

The fallout shelter signs today display an array of marginality, often sporting graffiti or solar distress. They linger on at the margins of the margins of our built environment, a reminder of how desperate we can collectively become.

In his opus, “Before the Storm,” which charts the rise of the modern conservative movement, historian Rick Perlstein describes a draft of a civil defense pamphlet written by the Kennedy administration. He writes, “community fallout shelters could double as ‘after school hangouts’ where ‘gregarious teenagers’ could ‘relax with sodas and play the jukebox.’ ” The farcically optimistic admonishment rhymes with one of the last instructions in the 1962 Civil Defense Fallout Shelter Manual. Once everything in the shelter has been set up, bathrooms identified and medical triage under way, it states:

“Inform the shelter occupants of plans for rehabilitation of normal civic, business and industrial operations which will bolster morale.”

I suppose the point is that things can always get worse.