There hasn’t been a market-rate building built in Minneapolis’ Seward neighborhood in over 40 years. The lack of new housing in the 7,000-person neighborhood area is surprising because Seward lies at the intersection of thriving real-estate markets. Seward is right on the Blue Line light rail, adjacent to the University of Minnesota campus area, and within shouting distance of downtown Minneapolis. Given the building booms around all three of those locations — and the thousands (!) of new units that have gone up near the university — the lack of development in Seward reflects a fundamental inequality within Minneapolis housing patterns and poses challenges for Minneapolis’ ambitious plans for growth.

It’s not as though there’s no interest in building new developments in Seward. Currently there are plans for a new building right next to the Franklin Avenue Blue Line stop, in an old industrial area on the edge of Highway 55.

“This is one of the best sites along either one of the light rail lines, but the demographics aren’t right and it’s still surrounded by industrial,” Brian Miller, the head of Seward Re-design, told me.

Miller’s development nonprofit has been working in Seward since 1969, and is currently trying to construct the first market-rate housing in the neighborhood in almost half a century. The group has ambitious plans for Phase III of a housing project [PDF], the first two parts of which were entirely affordable housing. Now Miller wants to build a building close to the light-rail line that would have over 100 units of market-rate housing.

But getting the financing together has proven to be a real problem.

“What we’re really talking about is a project that you can build without income limits,” Miller said. “The key to achieving diversity in the neighborhood, and offering options to a range of different people, is not having income limits, so that not only won’t you have [middle-class residents] have to move out, but they can move in in the first place.”

Like sausage making or divorce proceedings, financing for development projects is one of those things that nobody really wants to know about. A lot depends on getting financing together, a courtship ritual with lenders and an endlessly complex variety of sources of money.

As I understand it, real-estate lenders rely on comparable housing developments as benchmarks for how they make decisions. The problem in the Seward neighborhood is that there are no nearby housing projects that can serve as models to assuage risks. It leaves what Miller calls a “funding gap.”

“Part of the problem is people that would otherwise invest look at data, and when looking at demographics poor as they are in Seward, and they don’t dig any deeper than that, don’t have any confidence in the market here,” Miller explained.

At first glance, Seward’s demographics are surprising. In Minneapolis lore, the name “Seward” – named, of course, for William Seward, the secretary of state who purchased Alaska – is synonymous with the city’s well-deserved reputation as a hippie enclave. Seward is full of older single-family homes and duplexes, and home to neighborhood anchors like the Birchwood Café, the Seward Café, and the Seward Co-op grocery. 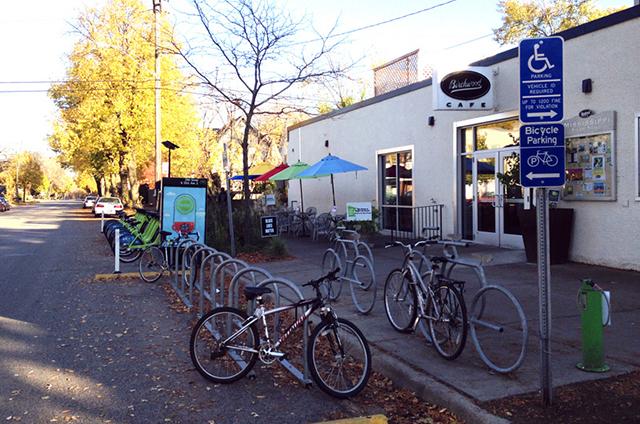 MinnPost photo by Bill Lindeke
The Birchwood Café in the Seward neighborhood, a local lefty landmark.

(Once when taking out-of-town guests on a walk through Seward, down beautiful Milwaukee Avenue and along the quiet residential streets, as we walked past house after house with vintage paint and native gardens, and as many strangers said “hello” to us, I had to admit that, “Yes, Minneapolis is a lot like Mr. Rogers’ neighborhood.”) 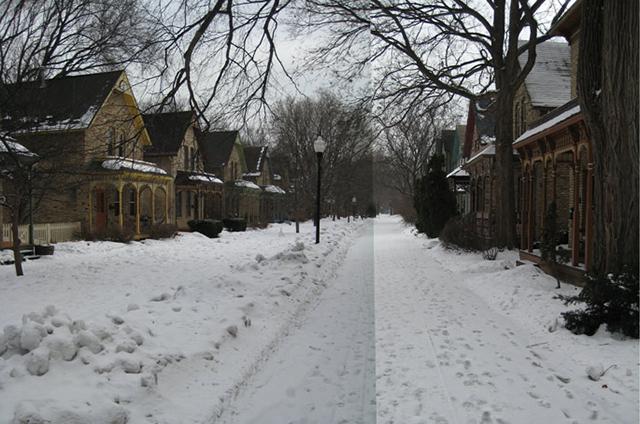 But that’s only half the story. If you look up the demographics of the area, you are faced with an eye-opening reality as the neighborhood’s poverty jumps off the map. According to census data, the average annual household income in Seward has declined in Seward from $43,000 to $31,000 since 1999, and much of that has to do with the increase in affordable housing. For example, the Seward Towers project, a 640-unit building, was recently refinanced and will be remodeled to stay affordable for another generation.

Because of Seward’s economically bifurcated nature, the neighborhood has become persona non grata for the real-estate market. It’s a problem for anyone who thinks that more middle-class residents in places like along Franklin Avenue would help the neighborhood thrive.

“We have a census tract or two around the Franklin LRT that have seen a bit of affordable housing development, but now average incomes are under $20,000 a year,” Miller said. “If that pattern continues, at what point does the commercial viability of Franklin and Seward disappear?”

The way that lenders look at housing financing, Minneapolis is split up into “submarkets” that have similar rents. In hot places like downtown, you might get high rents. But relying on comparable projects to guide finances leaves other parts of the city out in the cold. In that sense, Seward offers a microcosm of Minneapolis as a whole, where wealthier urban neighborhoods co-exist, often uneasily, alongside entrenched poverty. As a result, the city and the region have lately become famous for having the largest racial and class inequalities in the country.

“The evidence is that low-income census tracts stay low income out of fear of gentrification, because people feel like it’s happening everywhere,” Renée Spillum told me. Spillum is a project manager for Seward Redesign, and has been working on the Seward Commons project.

“In Seward, we’ve built nearly 1,000 units of housing with subsidies and an income limit over the last 45 years,” Spillum said. “That’s important, but there comes a point when it becomes a place when nobody thinks you can build anything else. And what happens to the health of neighborhood?”

To fill in the financing gap in a place like Seward, Minneapolis would have to be willing to use tools like tax-increment financing (TIF) or other grants to spur growth. But the city’s policies have remained focus on subsidizing affordable housing, and finding money for a market-rate project is not part of the equation.

“The city has a whole slew of different financing tools that it uses to support affordable and mixed-income housing developments, and most of those tools require some form of affordability,” said Andrea Brennan, Minneapolis’ director of housing policy and development. “Today, there isn’t anything we have in our tool box that helps assist [developments] further without including affordable units.”

The Minneapolis housing policy, updated earlier this year, is focused on providing affordable housing. It’s a worthy goal, particularly when the tight rental market has placed a lot of pressure on existing supplies of both government-subsidized and “naturally occurring” housing. The key section of the official policy states:

At least twenty percent (20%) of the units of each City-assisted housing project of ten or more units (whether rental or ownership) will be affordable to and occupied by households earning sixty percent (60%) or less of the Area Median Income (AMI).

Unfortunately for Seward, the well-intentioned requirements have left Minneapolis unable to intervene in neighborhoods abandoned by the real-estate market. The limitations of the city’s housing development policies mean that projects like Seward Commons are stuck between a rock and a hard place, unable to get financing for mixed-income or market-rate development.

“I don’t know what the answer is, but I know the city does not seem to have the tools to help prime the pump in some neighborhoods that might see some development if one could demonstrate there’s a market,” Brian Miller said. “I bet a lot of markets in Minneapolis or St. Paul would have the same story.”

In St. Paul, where I live, the area along the Green Line offers a similar real-estate conundrum. Since the light rail opened, all the new housing between downtown St. Paul and the far western reaches of the city have been subsidized, affordable projects. The lack of market-rate buildings along high-demand areas might be one reason rents and housing prices have been climbing in neighborhoods like Hamline-Midway, as the housing supply stays artificially constrained.

That said, the debate over the city’s and the region’s affordable housing policy does not present any easy answers. With support from Myron Orfield’s research at the Institute on Metropolitan Opportunity, three suburban cities are actively suing the Met Council for failing to evenly distribute affordable housing subsidies throughout the metro. But the idea of redistributing affordable subsidies is not a problem everyone agrees about.  By some accounts, the problem with “concentrated poverty” isn’t the concentration but the poverty. Instead of redistribution, a better solution might be focusing on reducing poverty in the first place through policies like the city’s living-wage ordinance.

The current fate of the Seward Commons project hinges on resolving the impasse between lending practices and the city’s policy on using tax-increment financing dollars. Without some help from the city, the financing can’t come together, and conversely, by including an affordable housing, lenders balk for different reasons.

“This is not that archetypical story of gentrification,” said Renée Spillum. “This is creating income diversity to prevent the stigmatization of an area. We built this $700M light rail and nothing is happening. Well, if not now, when is it going to happen?”

The quest for market-rate housing in Minneapolis’ Seward neighborhood