Twenty years ago, if you had predicted that the downtown Dayton’s would close, people would have thought you were crazy. The massive department store sat at Minneapolis’ peak value intersection, Nicollet and 7th, and in many ways the building was synonymous with downtown. The Mary Tyler Moore statue planted itself outside, eternally throwing her hat in the air, and each Christmas people flocked to the children’s exhibit, ascending story after story of escalators through every possible brand of retail.

Today everything has changed. The department store business consolidated and shrank, and Dayton’s became Marshall Field’s, and then Macy’s.

And now, even that remnant may be disappearing. It looks as though the era of the downtown department stores may well end in 2017. On Dec. 1, Twin Cities Business, citing unnamed sources, said Macy’s will close its doors in the first half of the year. Macy’s, however, has yet to announce its plans for the site; the Star Tribune reported on Dec. 2 that “Macy’s is in talks with a potential developer for its downtown Minneapolis property but has not yet committed to whether it will shutter its store.”

The news is the latest sign of the shifting nature of downtown Minneapolis retail, where residential development is booming, but mainstream stores are rapidly going extinct. Like it or not, Macy’s potential closing looks like the end of an era.

In the meantime, downtown is beginning to focus on a local, small-scale, and walkable future.

If you step back and look at the big picture, the shift in the downtown retail landscape hits you over the head.

“I moved to Minneapolis in 1979, and there were five department stores downtown,” Steve Cramer, the head of the Downtown Council, told me. “But that’s not the future of downtown retailing — not just for us, but for many cities across the country. The challenge is to think through what that future is and to define what we’re talking about.”

It turns out that the downtown retail scene isn’t all bad news. As Cramer points out, there are now four different grocery stores in downtown Minneapolis. Twenty years ago there weren’t any. And the difference is the new residential population.

“We have 40,000 people now living in the greater downtown area, and they want to shop,” Cramer explained. “They want to have a place to have their health care needs met, to drop off their dry cleaning, and it’s helped fuel the service and retail economy.”

Cramer today heads the Downtown Council, an organization that has an intimate connection to downtown. For one thing, the group formed back in 1956 when Minneapolis was in the midst of a profound identity crisis. First, Dayton’s had just opened up the Southdale Mall, the first indoor shopping center of its kind. Second, General Mills announced it was leaving downtown in favor of a sprawling suburban office park in Golden Valley. Those two events shattered the prewar downtown consensus.

The formation of the Downtown Council marks how modern downtown retailing neatly breaks up into eras. I call the first era “the primordial age,” when downtown was pretty much all of the city that there was. The core streets burgeoned with tiny shops of all stripes, handmade signs covering buildings. Downtown was a mix of small storefronts peddling everything from industrial goods to horse saddles to fancy corsets to dry goods from all over the world.

That era lasted until 1902 when Dayton’s opened its doors, a massive store boasting the latest retail technology of its day. Those early downtown department stores, based on the model from Paris — Le Bon Marché was the first modern department store in the world, back in 1852 — were unimaginable one-stop shops filled with unimaginable luxury. (See Charlie Chaplin’s amazing department store roller-skating fantasy scene from “Modern Times” for a sense of what these places might have felt like later for people struggling with Depression-era poverty.) 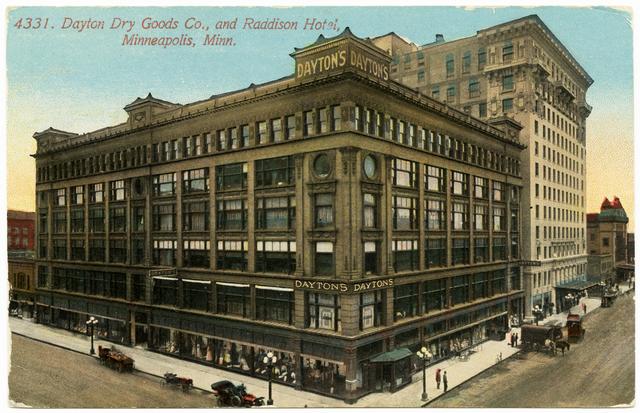 Courtesy of the Minnesota Historical Society
Dayton’s depicted on a postcard in 1912.

The next era of downtown retail is what I call the “the mall age.” For downtown Minneapolis, this era begins in approximately 1971 with the opening of the IDS center and the connection of a critical mass of skyways. Through the intervening decades, downtown planners and building owners combined existing department stores, skyways, and office buildings into something resembling an indoor mall, a seamless enclosed network of office-oriented retail. Tax-subsidized projects like City Center (1983), Gaviidae Common (the site of the former Donaldson’s department store, erected in 1989) and Block E (2001) attempted, typically fruitlessly, to create a downtown urban environment that might compete with the suburban ‘dales.

These days, the prospective closing of Macy’s marks a new era. Ironically, it might look a lot more like the original pre-Dayton’s landscape, one full of local businesses and street life focused on the sidewalk instead of the skyway.

‘Worst of both worlds’

“Macy’s probably was the worst of both worlds,” said Mary Hamel, the executive director of the Metro Independent Business Association. “The way that they got competition online, and then they didn’t have what our stores have, which is something unique, and a great story to tell.”

The MIBA is a Twin Cities business group aimed at increasing the visibility and vitality of small and locally owned businesses. Technically, in order to quality as a member of the MIBA, a business has to be majority owned within the seven-county metro, and not part of a chain franchise or be publicly traded. If downtown retail is a harbinger, the kinds of businesses that Hamel represents might be the future of Minneapolis retail.

“The North Loop is just on fire and has tons of fabulous retail down there — and that tends to be higher-end destination retail,” Hamel explained. “Downtown, there’s a lot of new thinking around parking. Some of the parking requirements that retail has to provide are sort of outdated given, for instance, how many people live downtown now. And how much more we have in terms of public transportation, bike lanes, pedestrian-friendly areas … .”

As Hamel explains it, online retail like Amazon, still subsidized by local and state governments, might pose more problems for larger retailers than smaller ones.  As shopping habits become standardized, and as space gets erased, small businesses gain a competitive advantage in some key ways. For goods where uniqueness or expertise matters, only local businesses have anything special to offer.

At the nudging of the MIBA, the City of Minneapolis announced this week a new budget request to fund a citywide “small business team” that would be directed to help local businesses navigate city regulations, what Hamel calls the “chutes and ladders” process of getting permits approved.

“To the extent that cities continue to put resources towards small and local businesses it will pay back in dividends,” Hamel said. “Not just economically, but in quality of life.”

Retail neighborhoods in today’s downtown thrive outside the skyway-laden core, in buildings amenable to locally owned entrepreneurship. For example, investigate the scene along the old buildings on Washington Avenue, right at the edge of the late ’50s Gateway Urban Renewal area. The new Bonobos store, taking the place of the SexWorld shop, the former center of the aging red light district, offers one of the great historical ironies in Minneapolis history. (For one thing, the high-end clothing store is named for an animal famed for ubiquitous simian intercourse.) 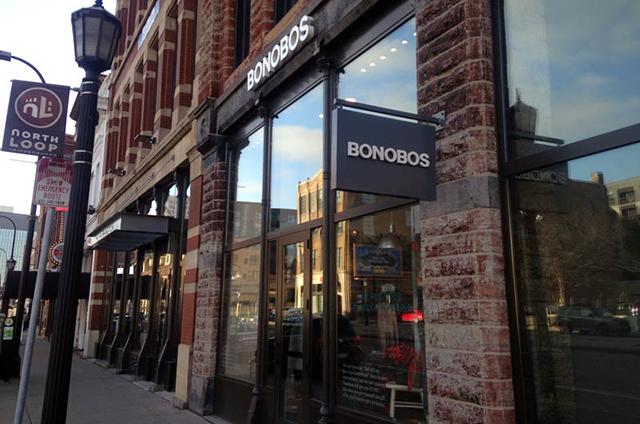 MinnPost photo by Bill Lindeke
Clothing retailer Bonobos has opened up in the North Loop space formerly occupied by SexWorld.

Today, the old formerly ramshackle buildings thrive and the modern midcentury core is having an identity crisis. From his downtown office, Steve Cramer points to the transitional “Downtown 2025” plan, explicitly calling for a focus on street-level retail. He puts his hopes in the new Nicollet Mall that, in a year, might become a catalyst for a new smaller-scale Minneapolis retail scene.

“We will see the new mall,” he said. “We’ll see a very active pedestrian-oriented mall, along with other public aspects that will draw people to the street. We’ll have a renovated Peavey Plaza, as an example, on the South End of the mall. As a result of that, we’ll have additional retail offerings, additional restaurants that bring activity to the street. And we’ll recognize that Nicollet Mall has become a different kind of street.”

Maybe by then the next new era of downtown retail will have begun and people will no longer miss old Dayton’s, the lost heart of the city.

Correction: An earlier version of this article incorrectly stated the requirements for belonging  to MIBA.

Asked to stay open during the COVID-19 crisis, Minnesota child care providers are calling for financial aid to help them stay afloat