Just days from Christmas, we’re in the midst of peak retail season. If you watch the TV news, most media attention focuses on crowds at the suburban malls or the remaining downtown shop windows. But when it comes to the Twin Cities’ retail landscape, there’s just as much happening out at an industrial park in exurban Shakopee, where the gleaming new million-square-foot amazon.com fulfillment center is operating at double time.

The building is a key cog in a changing economic landscape where online retail, dominated by amazon.com, is replacing the big-box, mall, and small business models at increasing rates. The new online world, quartered in the exurban fringe and dependent on a continually shifting workforce, poses huge transportation challenges that stretch the plausibility of transit in entirely new ways. Even as Amazon and other large employers relocate to the suburbs, transit planners are grappling with ways to offer transportation alternatives.

Once you reach what I call “true suburbia” – postwar neighborhoods planned around the automobile – transit planning becomes nearly impossible. Through most of these metro-area suburbs, homes and offices are spread out and separated by large parking lots. Meanwhile, sidewalks are rare, and almost any walk involves crossing wide roads with minimal safety features. This combination creates huge challenges for suburban transit and, as a result, most Twin Cities’ suburban routes remain centered around cars and park-and-ride facilities.

(These facilities pose their own dilemma: If people are driving to the bus stop in the first place, why not keep driving all the way to your destination? Why pay to take a slower bus?)

Yet for decades, the transit-challenged suburbs have been the fastest-growing areas for employment and housing.This pattern forces transit planners to experiment with new services like Southwest Transit’s brand new No. 638 bus, which began running earlier this month.

“The goal is really to open up transit for commuters from my service area: Eden Prairie, Chanhassen, Chaska,” Len Simich, Southwest Transit’s CEO, told me this week. “It comes in on the reverse commute. People want to go that direction, down to Shakopee for the employment opportunities, and there are quite a few that have materialized over the last year. Amazon or Millstone or Shutterfly, the casino, the hospital … . There’s a lot of jobs right now.”

Yet connecting transit to these 21st-century jobs isn’t easy. Last year, agencies in the southwest suburbs took a stab at transit to and from cities like Shakopee with an unusual suburb-to-suburb route called the 494. Unlike most other transit routes, built on a hub-and-spoke pattern centered on downtowns or the Mall of America, the 494 offered a radial route linking park-and-rides along the freeway.

The effort was short-lived. After it failed to attract riders, the Suburban Transit Association — the coordinated voice of the opt-out agencies — pulled the plug in March. But these days it’s trying again with a new strategy, a two-pronged approach that has two new buses — the No. 638 and the Mississippi Valley Transit No. 495 route — running hourly from the Mall of America to Shakopee.

“With the 494, the frequency wasn’t that great,” Simich explained. “We really have to provide more connectivity, and tie it in from the east and west. People coming for job purposes or for social travel want a complete network.”

One added feature of the 495 is that, four times a day — at 4:30 and 5:30 a.m. and p.m. — it makes extra stops directly in front of the Amazon fulfillment center parking lot. In theory, that should be a huge attractor for transit riders.

The shifting labor landscape of amazon.com

The problem is that, with its combination of remote location and volatile business practices, Amazon poses particularly daunting problems for transit planning.

“It’s built out in Shakopee, but the majority of the workforce is coming from Burnsville, from Brooklyn Park, places like that,” Spencer Cox, a Ph.D. candidate in the University of Minnesota’s Geography Department, told me. “Those are pretty long commutes that people are driving to get to this place.”

Cox is studying the labor landscape of Amazon, and as part of his ethnographic work he worked for months at the Shakopee fulfillment center. In addition, over the last year, he has been part of a group coordinated by the local think tank, the Institute for Local Self Reliance, that is trying to piece together what Amazon’s recent business model means for cities.

In a thick new report released on Cyber Monday, the Institute delves into the company’s labor and business dynamics. The report details how, over the last few years, Amazon has built dozens of massive new logistical complexes on the edges of U.S. cities that are upending retail and labor practices. The local example, in Shakopee, is typical.

“The way that Amazon organizes their labor market, many of these jobs are part-time,” Cox explained. “You can be ‘flexed’ up an hour or ‘flexed’ down an hour. You have three overlapping shifts than can get flexed up or flexed down.”

According to Cox, while there are many more stable jobs available in overlapping shifts, a large percentage of Amazon jobs are part-time, subcontracted, and temporary work. Many of these temporary employees work shifts that might be three to five hours in length depending on the day. The resulting complexity, along with the lack of certainty, make an hourlong transit trip look even more daunting. 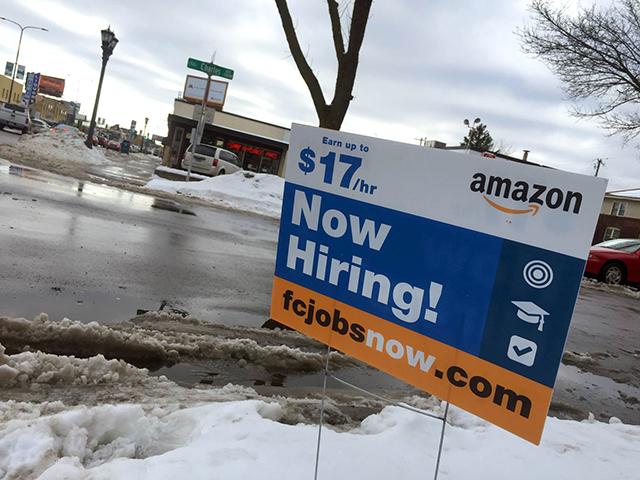 (For example, according to the fairly-accurate Google Maps, taking the bus to the Amazon center from the corner of Snelling and University Avenues in Saint Paul averages two hours by transit, using the 495 bus. Contrast that with a 40-minute drive.)

This week I tried twice to take the 495 out to Shakopee, and it’s more difficult than you might think. The bus isn’t marked very well compared to the traditional Metro Transit designs, and its hourly schedule means that if you miss it, you’ll be waiting an awfully long time. 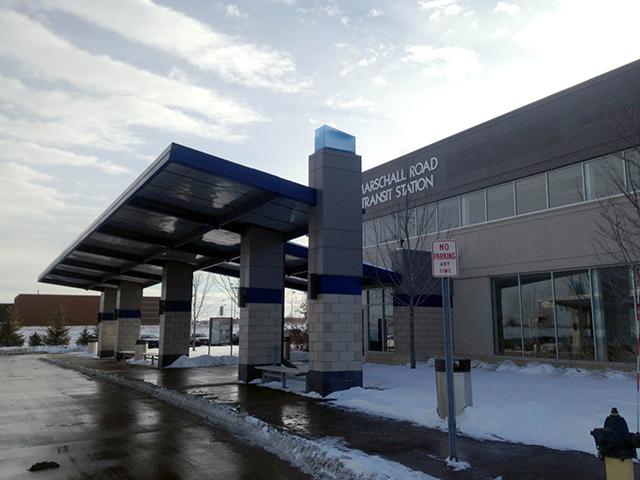 MinnPost photo by Bill Lindeke
The transit center in Shakopee

That said, I eventually made it onto the bus. And the new plan, where the two routes that serve the Amazon center are coordinated and timed for easy transfers, might be the best possible approach to serving its employees.

But given the challenge of exurban transit, that might not be good enough to make much of a difference in commuting patterns. In a recent post on streets.mn, Aaron Issacs, a retired transit planner and writer, is pessimistic that the new routes will be effective. He writes:

These new services are non-stop expresses that take the fastest available routes. It’s 35 minutes from MOA to Shakopee and 42 minutes from Eden Prairie Station. That wouldn’t be too bad if [they] were the starting points for these trips, but they probably aren’t. […] Trips in excess of one hour are not popular with anyone, and transfers can be unreliable, especially in bad weather. Unless the Shakopee jobs offer wages and benefits that can’t be found closer to home, it’s hard to see why anyone would take on such a long and challenging commute.

Despite the challenge, with the thousands of entry-level jobs that are migrating out to the exurbs, something must be done. Starting this month, the new pair of suburban buses will be trying their best to serve Shakopee’s workers, and Southwest Transit has even hired a new staffer who’s mandate is to try to coordinate transit with employers.

“It’s just been rolled out,” Simich, the transit CEO, said. “We’ll see a lot of tweaks along the way. And we’re working closely with the businesses to match up with their needs. Right now [on the 638] we have 50 rides a day and we’re only going to see that grow.”

Is it even possible to plan for transit to the Shakopee Amazon facility?