So far, this W.I.N.O. (“winter in name only”) has been smooth sailing for Twin Cities bicyclists. Apart from darkness, occasional rain, and that one time it went below freezing, area streets are debris-free. With the right clothing and a good pair of lights, Minneapolis remains a bicyclists’ oyster even in December.

Yet, in theory, winter could arrive in Minnesota one of these days. Should that dark day come to pass, it might mean sub-freezing temperatures and concomitant nonliquid precipitation. As they build up on the streets, ice and snow make wintertime bicycling into a huge challenge that exacerbates the danger of cars.

“Biking has been growing really rapidly, and its been growing even faster in the wintertime, as people learn how to do it and as gear and other things improve,” explained Ethan Fawley, the executive director of the Minneapolis Bicycle Coalition. “So there’s a lot more interest in winter maintenance of bike lanes than there was 10 years ago, and that’s because of the growing demand for people who want to do it.”

It turns out that, because of their radically different physics, plowing bike lanes is a real challenge for northern cities, but Minneapolis is slowly figuring out how to make bike lanes that are easier to clear in the wintertime.

As many an urban mayor has rudely learned, getting snowplowing wrong is a quick way into the political doghouse. That’s one reason cities like St. Paul and Minneapolis spend millions each year on capital and maintenance costs for snowplowing, and during a snow emergency crack Public Works teams leap into action to execute plowing strategies with military efficiency.

But with all the attention and resources going to cars and arterial roads, in hopes of forestalling driver frustration, bikes and bike lanes have typically been footnotes in the snowplow schedule. (This is true of sidewalks as well, where snowbanks are often huge problems for people trying to walk in the winter.) For anyone navigating the city on a bike after a storm, the experience can become impossibly frustrating, and many simply give up.

But St. Paul’s Paul Nelson is not one of them. He’s been a winter bicyclist for decades, traversing the frozen terrain of the city’s scanty bicycling infrastructure. Over the years, fixated on solving the winter bike lane puzzle, he’s come to the conclusion that traditional bike lanes are almost impossible to keep clear.

“The difficulty with maintaining the bike lane outside, between the parked cars and the traffic lanes, is that space gets beaten up,” Nelson told me. “The parked cars cross it if there’s a small snowfall, and then you have temperature changes and you get ice pack.” 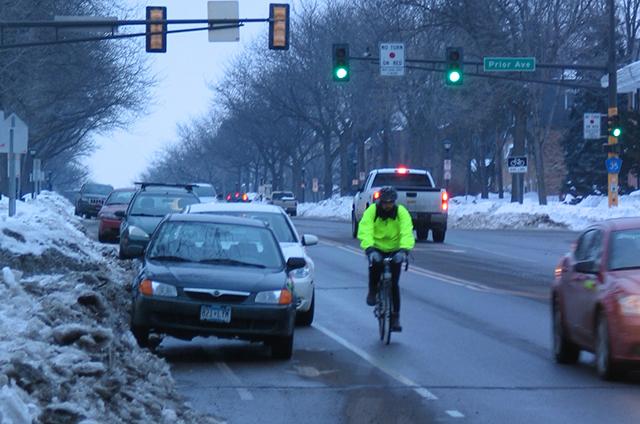 Photo by Paul Nelson
“As you know, the parking lane pushes out in the wintertime as snow builds up. Parked cars end up in the bike lanes, and eventually the bike lanes don’t exist anymore.”

As Nelson explains it, there are multiple problems with regular on-street lanes. For one thing, when plows are forced to go around the inevitable parked cars, illegally lingering, you get “a half-moon” of snow that ruins the bike lane. The second big problem is a simple question of weight ratios. A 200-pound bicycle-and-rider does not have the same impact as a 2-ton car. When cars drive over unplowed snow to park, they compact it into a dense sheet that becomes impossible to plow using conventional equipment. Meanwhile, in the travel lane, the repeated passage of heavy tires has a “clearing” effect, pushing the mixture of snow and salt to the side. The end result is a clear car lane and a bike lane full of dangerous crap.

At that rate, after a few substantial snowfalls, Twin Cities streets succumb to frozen entropy and transform into an obstacle course of ruts, shelves, and a dozen other subtle variations of cold-water crystals. The only maintenance solutions are expensive processes of melting or chipping away the ice pack. This recurring bike lane plow problem is one key reason cities like Minneapolis are moving away from traditional on-street lanes and building more “protected bike lanes,” which advocates and engineers hope will be easier to maintain in the wintertime.

“Protected bike lanes are even more important in the wintertime, because it allows us to more easily maintain a usable bike lane space,” Fawley said. With a strong advocacy push from the Bicycle Coalition, Minneapolis has recently adopted an ambitious plan to add over 30 miles of protected lanes [PDF]. Just last year, at least three new projects opened in places like Third Avenue downtown and Blaisdell Avenue South.

“As you know, the parking lane pushes out in the wintertime as snow builds up,” Fawley said. “Parked cars end up in the bike lanes, and eventually the bike lanes don’t exist anymore. Whereas with the protected bike lane there’s a little bit more space … .”

But just because you build it doesn’t mean the plows will come. The new designs, where thin vertical bollards (those “white plastic things”) are installed on the street year round, change the dynamics of snowplowing for the Public Works department.

A work in progress

“We are still working to define how we’re going to maintain those,” said Mike Kennedy, director of Transportation Maintenance and Repair. “The level of service we want to provide for on-street protected bike lanes is basically the same as what we try to provide for our trail system. Our goal is to have them plowed and or treated within 24 hours of the end of the snowfall.”

That involves a few tweaks to the plowing system. The current process: After a regular plow makes a pass on the driving lane, the city goes back with a smaller vehicle (often a pickup truck) and plows the protected bike lane. They then often have to go back again and do some “follow up” work on the windrow (aka the ridge of snow at the plow’s periphery) around the bollards. 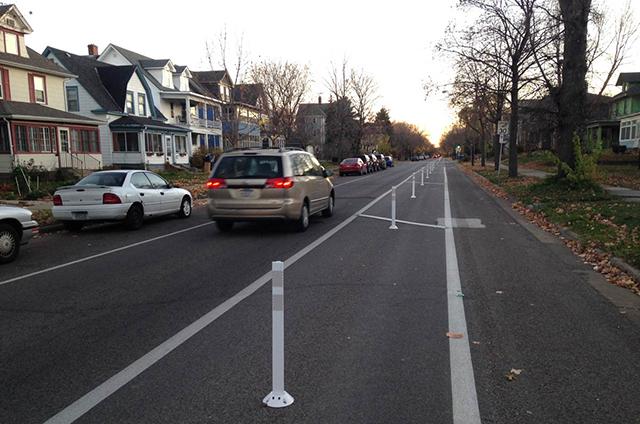 So far, the new procedures are working pretty well. But that’s not saying much because the last few winters were mild, with little snowfall accumulation.

“We haven’t really been challenged since we started to see the explosion of protected bike lanes,” Kennedy said. “There’s a huge learning curve, and we’re no experts in this. Or we don’t feel like experts. People are going to have to understand that the level of service goal is going to suffer if we really have a big winter.”

But lowered expectations have been the default mindset of winter bicyclists for decades, and it’s something that an advocate like Fawley fully understands. Bicyclists don’t need every street to be perfectly clear. Just having one or two decent routes through the city in the wintertime makes a huge difference for riders.

“We really want to have a system that works in the wintertime,” Fawley admitted. “That may mean that we’re not maintaining every bike lane or bikeway in the city, but that we have some priority system. That’s an appropriate way to balance where we’re at as winter biking is still developing.”

For example, Minneapolis’ Midtown Greenway is one of these central winter bicycle spines, and it’s a route that Paul Nelson, over in St. Paul, looks on with great envy.

“That Midtown Greenway is good example,” Nelson told me. “On my way to work, they had a light snowpack on the Greenway and [I happened across] a guy in a plow. I asked him, have you had to use salt this season on the Greenway? And he said, no, we’ve lucked out. Not had to use any salt at all.”

Because routes like the Greenway are free of cars, at least in theory, they can be maintained much more easily than on-street lanes. That’s why Nelson would like to see more protected bike lanes making their way to St. Paul. He recently proposed modifying the bike lane along the western (wider) portion of Summit Avenue into a parking protected bike lane that would allow for relatively straightforward wintertime plowing.

“Cars are so much heavier,” Nelson told me. “We have this problem in this region because of the temperature ranges. Car traffic creates icy conditions right off the bat, and it makes it hard for Public Works to deal.”

According to Nelson, one of the big challenges is when snowfall is quickly followed by a cold snap and temperatures dip into the 10-15 degree range, radically decreasing the effectiveness of road salt. It’s these conditions that can create what he calls a “washboard icepack,” where a thick ridge of ice clings to the side streets and can potentially last for months. (This is what happened in the notorious winter of 2013-14.) 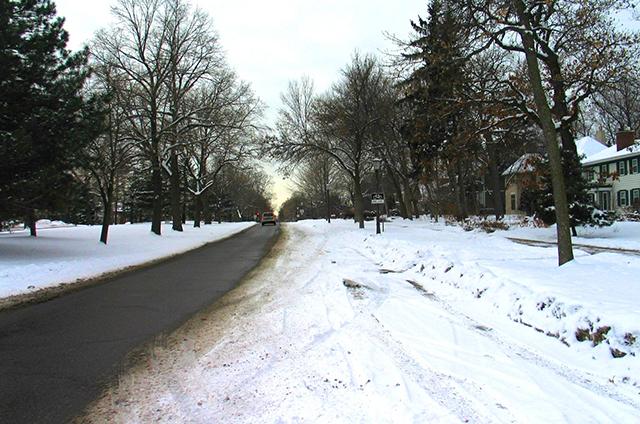 Photo by Paul Nelson
The right conditions can create “washboard icepack,” where a thick ridge of ice clings to the side streets and can potentially last for months.

Nelson is watching what’s happening in Minneapolis with the new protected bike lanes. If there’s another snowy season someday, he’ll be riding around to see how the city is handling it.

Like it or not, people in the Minneapolis department are quickly becoming the country’s leading experts on bike-lane plowing. The kinds of tactics and equipment they develop now might become industry standards for northern cities over the next few years. If winter ever returns to the Twin Cities in full force, the world will be watching how well the new bike lanes perform.

Correction: An earlier version of this story had Mike Kennedy’s name wrong.