The move holds promise for St. Paul’s ambitious development goals for the blocks around the stadium, which will, in theory, catalyze longstanding city plans to transform the half-empty Midway Shopping Center strip mall and parking lot into a densely developed, tax-producing transit-oriented urban center.

There’s only one problem. The master lease deal does not affect an existing lease agreement between Rainbow Foods and the strip mall’s owner, RK Midway. The store sits smack in the middle of the existing plans, directly underneath the proposed footprint for the stadium. The sticky wicket points to how the complex and hypercompetitive world of retail leases poses problems for cities as they try to make the most of valuable urban land.

The Rainbow Foods in the Midway Shopping Center has a very strange story to tell. The store acquired an odd status 2½ years ago when 18 Rainbow stores (a subsidiary of Roundy’s) were acquired by SuperValu, the large grocery retailer that also owns the Cub Foods brand and franchise. When it bought Rainbow, SuperValu made decisions on each of the Rainbow locations, transforming some of them into Cub stores, and closing others that were too close to existing Cub branches. 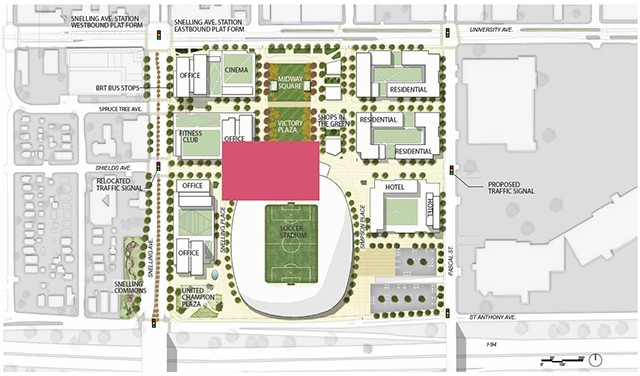 Courtesy of Minnesota United
A proposed soccer stadium redevelopment plan, with the current site of the Rainbow Foods store approximated in pink.

For example, the Rainbow at Lake and Minnehaha was closed down because it was directly across 27th Avenue from an existing Cub store. Instead, the shell of the former grocery sits empty, and was last used as an innovative stage for the Brecht play, The Good Person of Setzuan.

At first glance, the Midway Rainbow would seem to have held a similar fate, sitting only a quarter mile from a Cub location across Pascal Street. But, oddly enough, the existing Rainbow store is still open.

In December, Pioneer Press reporter Fred Melo offered the following explanation, offering that the lease negotiations holding up the soccer-stadium deal were “typical of a complicated land deal involving multiple tenants and landowners.”

One possible concern for SuperValu, which owns the Rainbow store, is that strip malls often have noncompete clauses. Despite the city’s plans for redeveloping the strip mall into a mixed-use complex, if the Rainbow closes, a grocery competitor could theoretically open up a location that would compete with the Cub across the street.

(See also my column from last year about the challenge of redeveloping obsolete big-box buildings and “noncompete clauses” that are often attached to the sale of these buildings. The suburban city of Cottage Grove learned this lesson the hard way when it had to purchase and try to reuse an old Home Depot building. Getting around the noncompete sale agreement has proved to be an impossible challenge. The city bought the building at a loss in 2015, but a new tenant that would be compatible with the sale conditions has yet to be found.)

I reached out to multiple parties involved in the delicate Rainbow negotiation, and got no further clarification on the situation. Both the City of St. Paul and the St. Paul Port Authority passed the buck, the former stating that it was “R.K. Midway’s question to answer,” and the latter replying last week that that they “have not had any conversations with Rainbow.” Meanwhile, a spokesperson from SuperValu stated that “while we don’t provide lease information publicly, I can tell you that at this time we do not have any plans to close the Rainbow Foods Midway store location.”

The strange status leaves an odd impasse at the center of the celebration of the new stadium, what might even be called a game of “strip mall chicken” if Leann Chin weren’t located nearby. Any rendering showing the footprint of the new stadium clearly shows it using the centrally located space currently occupied by the Rainbow store. And the Rainbow store itself is owned and operated by a company that has another location mere feet away. There is no real reason for the store to be open.

And yet it remains, lights blazing, stocked and staffed. It’s a telling example of how market share trumps common sense in the competitive world of big-box groceries.

Actually shopping at the Rainbow

Today, walking into the Rainbow Foods feels kind of weird. For me, most shopping experiences — whether at a brand new Whole Foods, a local co-op, or a Vietnamese grocery store in Frogtown — seem carefully designed to cultivate feelings of order and excess. A recent presentation from the Minnesota Shopping Center Association [PDF] describes how the eventual obsolescence of older stores combined with new competitors like Hy-Vee and Whole Foods, increasing urban densities and more mobile shopping habits, mean that grocery retailers have to continually remodel and improve their stores. In other words, the fight for market share is intense, and everything must continually be remade anew.

That’s why shopping at the Midway Rainbow is so odd. My family shopped at this very Rainbow when we were kids, and in my hazy recollections, the store was full of life. My folks loved “double coupon days” (which still exist, by the way) and the store’s bakery was a staple of our kitchen.

Today, its status as a grocery placeholder means that it’s neither up-to-date nor obsolete (in the way that some Kmart stores seem to have become when on their last legs). I was expecting more half-empty shelves, but in fact they are as stocked as any grocery can be.

And yet walking through the Rainbow, with full shelves and empty aisles, feels almost dreamlike. Despite the cheerful admonishments paltered to the wall — “weigh to go” by the bulk bins, “say cheese” by the dairy cooler — something seems missing. The walls are a bit too blank, the movable architecture and display kiosks too minimal, and vast empty beige spaces open up between the cracks in the facade. Walking through the cavernous space feels uncanny, like the very beginning of a science-fiction episode or the end of a postapocalyptic film. 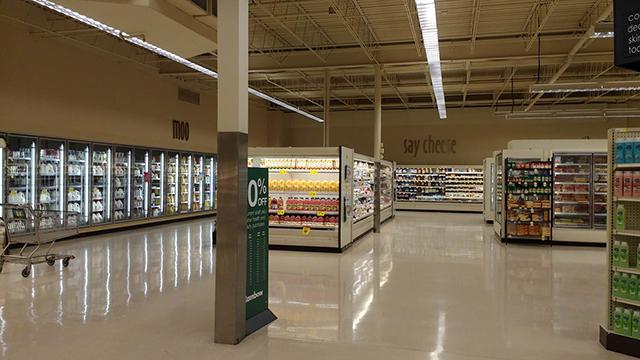 Something has to give

With the physical groundbreaking having taken place in December, something will have to give. Either the team, the city or the Port Authority figures out a way to acquire control over the Rainbow Foods property, or the stadium might wind up working around the Rainbow. The latter possibility — which, given the magnitude of the investment, boggles the mind – would create a absurd situation akin to the famous Edith Macefield house in Seattle’s Ballard neighborhood (featured in the film “Up.”) The more likely outcome is that the development players figure out a (probably expensive) way to buy out SuperValu, and that the Rainbow will go the way of the bulldozer.

Either way, today the Midway is still facing a strip-mall situation that resembles a classic “Mexican stand-off.” The impasse reinforces the challenge that cities like St. Paul face when trying to redevelop land around auto-oriented property in the hopes of increasing density and the urban tax base. In these situations, existing leases and revenue streams wield a tremendous influence over the kinds and degree of incentives that ambitious city planners have to bring to the table. Even with the Port Authority’s help, and a billionaire soccer team owner’s full support, something as seemingly simple as dislodging a redundant grocery store has proven to be a real challenge.

A delicate negotiation: Rainbow Foods sits smack in the middle of soccer plans