With the 2017 legislative session officially under way, the public gaze turns to the Minnesota Capitol. This year, there’s something new to see, as the lengthy restoration process of the 1904 building is finally complete. The marble Cass Gilbert masterpiece looks better than it has in a century, and there are lots of new things to examine and explore.

But while you’re taking the tour, take notice of where you parked your car. No honest look at the Capitol complex would be compete without covering the byzantine network of parking lots — which, together, form half of the state government’s land-use footprint in St. Paul. For almost 100 years, Capitol parking lots have been performing their unglamorous job, storing empty automobiles, and the story of these parking lots is almost as political as the people who drive them. Here are a few highlights of the off-off-the-beaten-track Capitol tour.

As far as I know, the base of the Capitol steps are home to the earliest known dedicated Capitol parking, dating at least to the early 1920s. Until World War II, Capitol area parking was limited to angled on-street parking both here, in front of the building, and eventually across the street. And until a few years ago, when the Capitol mall was redesigned, you could still find a row of metered or reserved parking spots sat near the bottom of the Capitol steps along the curving drive that then was the primary access to the building, for over half a century the best parking spots in the complex.

It’s a well-known truism that you should never come between a politician and his/her parking spot, and one of the best litmus tests for political clout is the proximity of one’s parking spot: the closer the spot to the center of the Capitol, the more influence. For example, the previous session’s spat about the new Senate Office Building partially revolved around access to parking spots.

Today there is no parking to be found at the capitol steps, though if you glance southeast (toward the Cathedral of St. Paul), you can still see the remains of the temporary parking lot that displaced part of the Capitol mall. This was a two-year interim lot installed to streamline the Capitol restoration. In last year’s column on Capitol parking, spokespeople from the Department of Administration assured me that the parking lot would be unconstructed, and at some point this year the Capitol mall will be put back.

Until after World War II, denizens of the State Office Building parked in a small, angled lot of approximately 40 spaces located in what was then an alley between the building and the church. This is an example of a late-modern multistory ramp that, through the use of ornamented facades and some small touches of decorative rail work, attempts to fit in with its historic surroundings. Just to the north sits a small surface lot (Lot D) that traces the old angled line of what was then “Wabashaw Street,” which ran into the Rice and University intersection at an angle. Today the street is a sidewalk canopied by trees.

A must-see, this parking ramp, tucked behind the drab lines of the midcentury Centennial Building, is both an architectural treasure and a historical curiosity. The three- to four-story parking ramp dates to the state’s centennial celebration (1958), and sits on the former site of St. Paul’s Central Park, a Victorian-era piece of public land that was the site of the first Winter Carnival ice palace in 1886. Today, only a small scrap of the old park remains, a patch of odd green grass atop the north end of the ramp. Around the old park, the Centennial ramp’s central location makes it one of the most coveted parking lots in the Capitol complex, and there’s currently a hefty waiting list for a spot.

The first thing that any parking lot architecture connoisseur will notice on visiting the Centennial ramp is its unusual curvature. Parking ramps are notoriously ugly, spaces where brute utilitarian economics almost always trump even the most banal aesthetic touch. Yet the Centennial ramp boasts radically curving concrete decks, a paradisiacal array of parking that speaks to an era more conducive to governmental exuberance. 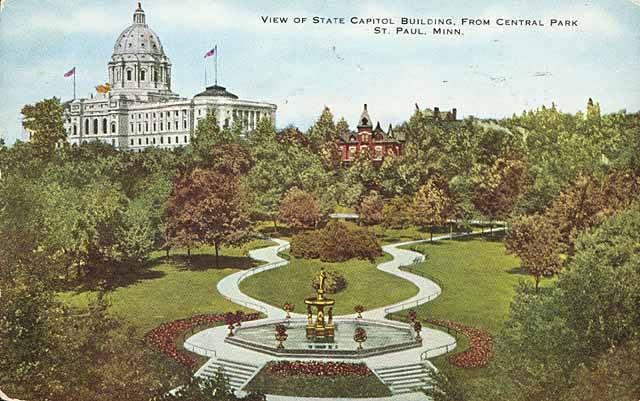 Courtesy of the Minnesota Historical Society
A postcard depicting Central Park in the early 1900s..

Today, the modernist parking dream is in dire straights. The bottom half of the ramp’s ground floor has been cordoned off due to structural instability, partially attributed to leakage caused by the ramp-top landscaping. Be sure to visit the small remnant of Central Park, accessible by the staircase connecting to Rev. Martin Luther King Jr. Boulevard, before it’s gone.

The small surface parking lot on the northeast corner of Rice and University might seem marginal, but to me, this odd lot contains no little pathos. You can find it directly across from the Capitol/Rice Street station on the Green Line, little more than asphalt and a small kiosk.

For much of the 20th century, the intersection of Rice and University was a critically important part of the St. Paul urban fabric, a bustling node of activity. Both Rice and University had well-trafficked streetcars, and looking back at historic photos of the angled corner reminds me of a European cityscape. 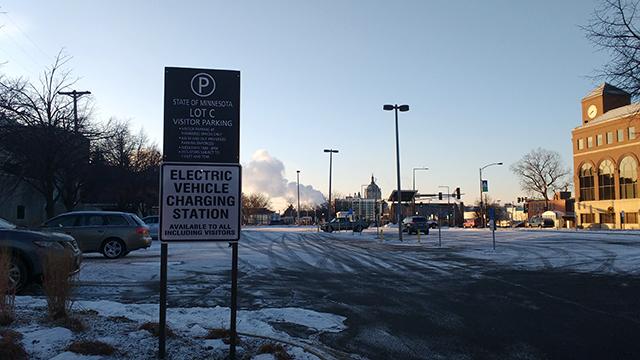 Today there is little of interest happening here and, for the fiscally minded, no taxable property to speak of. Across the street, the postmodernist League of Minnesota Cities building sits, its opaque windows reflecting the bleak St. Paul urban fabric. Every few minutes, the sound of a hawk cries out from the rooftop to keep away pigeons.

The building immediately next door to the east is the first Ford Motor Company factory in Minnesota (currently owned by the state) and its architectural detail is a testament to this corner’s former glory. According to tax records, of the buildings that used to stand on Lot C, two were torn down sometime between 1953 and 1973, and the last one was demolished in the late 1990s.

The 1962 Sears building is the Twin Cities’ definitive midcentury modernist retail structure, its low, drab walls offering a brickwork facade that mirrors the balance of the building as a whole. The main entrance, facing Rice Street, is marked by a long veranda entranceway; the building offers a degree of architectural harmony, bringing together the complexity of universal retail and the legacy of International Style formalism, tweaked with Midwestern materialist sensibilities.

The 14-acre 1,500-space parking lot might seem like another another story, yet the empty acres of asphalt are a critical component of any ’60s retail complex. Known to Capitol denizens under the enigmatic moniker “Lot X,” a corner of the Sears property is leased to the Department of Administration, which oversees the complexly nuanced political landscape of Capitol region parking. This parking lot forms the lowest rung of the Capitol area’s parking hierarchy, and here you will find spaces the spaces for new hires lacking seniority, lowly interns, and other less compensated state employees who daily trudge o’er the blacktop sea.

These are just a few of the highlights of the State Capitol area parking lot history. (Others include the early ’60s Department of Administration lot, Lot F, the brand new Senate Office Building parking lot, and the MnDOT lot and adjoining crosswalk.) While the Capitol building itself is, today, a shining example of steadfast preservation, the grounds surrounding the Capitol have been radically transformed since the building was first erected in 1904. Yet the two most notable changes — the clearing of the old urban fabric and the construction of the freeways  — might pale in comparison to the parking lots that, unheralded, perform the unglamorous task of parking for elected officials, government employees, and visitors from across the land. Here, too, there is a story to be told.

Correction: A previous version of this article incorrectly identified the designer of the St. Paul Sears building.