Imagine booking a hotel room during the Winter Carnival that let you stay in Rice Park — not overlooking Rice Park, but directly in the park itself. You open your window shade to find an ice sculpture outside, pop out of your room and into the midst of a Vulcan horde or a city decked out out in midwinter lights.

If all goes well, this might be possible when the Carnival opens up in a few weeks, because over the last year, a modular building called the Light Hotel has been moving around the upper Midwest. A self-described “one-room mobile hotel,” the structure is a reincarnation of a shipping container designed by St. Paul-based Alchemy Architects. Throughout 2017, the Light Hotel will plant itself all around St. Paul and Minneapolis in the hopes of creating a conversation about housing and design. It’s a demonstration of how flexible housing might become more accessible in the Twin Cities as architecture, urbanism, public and private space become increasingly blurred.

The city as lobby

“It’s an art project more than it is house,” said Geoffrey Warner, Alchemy’s founder. “The idea is that it is an object or a dwelling out to celebrate the luxury of less. By that, I mean we want to use it as a study of how much is enough, and what luxury can really mean even given some pretty distinct restrictions.”

Since its launch in May, the 20-foot wide Light Hotel has spent a week or two at a time in hot spots like Wisconsin’s Eaux Claires music festival, the front of St. Paul’s Bang Brewing, next to the American Institute of Architects (AIA) state conference. And, at least some of the time, the one-room “hotel” actually served its purpose, with guests booking rooms for the night. The hotel is currently in the final stages of negotiation with St. Paul regulators to serve as a permitted accommodation space in 2017. If all goes well, people will be able to book rooms there in parks or other public spaces within a few weeks.

One intriguing dynamic of the Light Hotel project is how its presence shifts the spaces it inhabits. A parking lot, park, or plaza looks a lot different with the Light Hotel parked on the perimeter, the city streets and spaces becoming “urban lobbies” that open up new social possibilities.

“There are certain famous places, well traveled by everyone in the city, and wouldn’t it be cool to inhabit those places is a different way?” asked Warner. “On the other hand, there are some forgotten places and in-between places, like alleys or side yards. These are spaces that could be used for something else and by using this as a placemaking device, you can start to talk about broad issues of public and private space and how they intersect.”

In this way, the Light Hotel reminds me of the mobile sauna, a way to bring vitality and street life into some of the more marginal stretches of the Twin Cities.

The temporary urbanism surrounding the Light Hotel is part of a larger conversation about housing that’s been bubbling in the background of zoning codes for years. Part of the problem is that, compared to earlier urban eras, today’s American city epitomizes order and stability. Single-use zoning, private property, the dominance of the single-family home in all but the largest cities means that the way many Americans live has become remarkably standardized. Exceptions to the rule — things like public housing, manufactured housing parks, or even intentional communities — prove how hegemonic the single-family city has become. 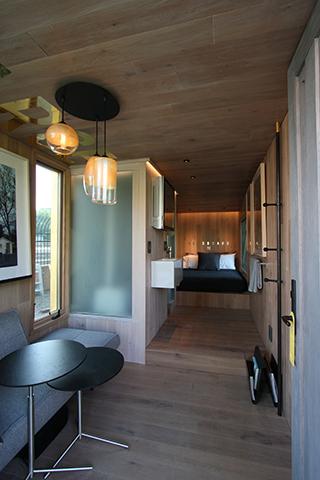 Courtesy of Alchemy Architects
The interior

But given the rapidly shifting demographic character of the 21st century America, where nuclear families are increasingly rare and the population is inexorably aging, becoming more flexible about housing holds a lot of promise, particularly as housing costs rise while wages stay flat or decline.

As Warner admits, the idea of using shipping containers as a base for providing more affordable housing is nothing new. For example, check out this memoir about a failed 1970s shipping container housing project in Mankato, or similar projects in places like Detroit or Denmark.

Unlike many of those projects, Warner’s hotel room offers a higher design standard than most container-based projects. Because of the difference in materials and attention to detail, the Light Hotel fits more neatly into a minimalist rather than a utilitarian aesthetic. In some ways the short-term nature of hotel visits seems like the perfect fit for a small space that resembles a Minnesota cabin or “tiny house.”

According to Warner, who has slept in the Light Hotel during a snowstorm, it was “toasty and warm, the shower worked great, and it was pretty fun.”

In the last few years, both Minneapolis and St. Paul (and even some suburbs) have passed ordinances making regulatory space for accessory dwelling units (aka ADUs aka “granny flats”). But most of the time, the idea of ADUs has been more hype than reality. While they often look good on paper, actually building ADUs has proven difficult and expensive.

“Almost a year ago last spring, we got really down to the process of figuring out if we could do it,” said Alex Cecchini, a data analyst who lives in South Minneapolis. “Our garage isn’t in great shape. The slab has cracks in it, and a couple of walls need a bit of work, [so] we went down the ADU path last year and contacted three or four builders.”

As it turned out, after some initial design work, cost estimates shot past the $100,000 threshold and Cecchini gave up on the idea. 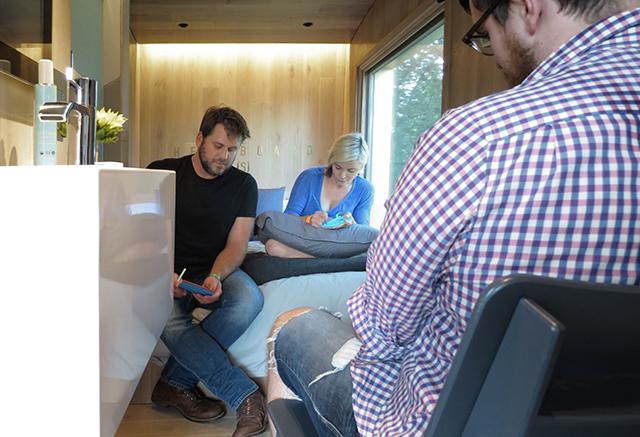 Courtesy of Alchemy Architects
Writers at the Eaux Claires festival inside the hotel.

“Fixed costs are higher on an ADU because, with a smaller footprint, you’re spreading out building permit fees,” Cecchini explained. “Unless you have a single story, smaller thing you’re not gonna get prices close to $100,000 for an ADU if you want to retain a garage in the backyard.”

The high regulatory bar for this kind of housing means that it will likely only be built in the Twin Cities’ most expensive neighborhoods, places like Linden Hills or Crocus Hill. But if ADUs remain a housing option only in high-priced neighborhoods, an extra amenity for those who can afford it, it would belie the rhetoric of affordability that surrounded earlier debates around ADUs.

Alternatively, if regulators and designers can figure out how to hit the sweet spot of good-quality flexible housing, they might go a long way. Cecchini’s “single story, smaller thing” is exactly the target for the Light Hotel’s design challenge. And Warner and the team at Alchemy remain hopeful that the Light Hotel, offering a visceral experience of what minimalist can look and feel like, might help shift the conversation. “What if you could make it like an iPhone?” wondered Geoff Warner. “What would it be like? The costs for these things are gong to be way more expensive than just going and buying an inexpensive house in a less expensive neighborhood, but what happens when you get into places where people want to live?”

Finding the Goldilocks balance for accessory housing — not too big, not too small, not too cheap, and not too expensive — is one of the end goals for the Light Hotel project. Hopefully this year, once the Light Hotel opens for business, gets approved and begins accepting reservations, people can find out what it’s like to spend the night in a small, simple urban dwelling.

“From an affordability standpoint, for people building their own structures, imagine having a place to live,” Warner continued. “I think we can demonstrate that a small structure really has practical potential to be really high quality, and provide something that doesn’t currently exist in our cities.”