Even in winter, almost nothing stops a bike delivery in the Twin Cities.

The other day, with the temperature just below zero, I went on a long walk. Much of the time for me, walking in the winter offers an exquisite experience — a cocktail of icy obstacles, existential solitude, and the stark snow-covered city. I look forward to these walks every year, especially on days where the sky is pale and blue, bathing the street with weak sunlight.

Still, it was cold. With even my warmest jacket, hat, and scarf wrapped about my chin, after a mile and half to the coffee shop I was well ready to warm my fingers around a hot beverage.

Just at that moment, amid a sigh of relief and self-congratulation, I saw the Peace Coffee delivery bike roll by. Turning from the subzero wind, while the red-clad bicyclist pulled a loaded trailer along the Minnehaha Avenue bike lane, my sense of accomplishment began to pale.

Peace Coffee is just one of the handful of Twin Cities businesses that use bicycles to deliver their goods. Even in the winter, all through the below-zero temps and cold Alberta winds, over the icy winter streets, these bicycle businesses keep going.

Peace Coffee is a 20-year-old enterprise based in South Minneapolis, and is one of the local pioneers in fair trade coffee that work directly with farmers in the global South. On top of fair trade sourcing policies, the thing most people know about is their commitment to bicycle deliveries, out of their main offices on by Hiawatha and Lake.

Today, Peace Coffee employs two full-time riders, each of whom rides two routes counting for one or two dozen deliveries adding up to around 500 pounds. They cover all parts of Minneapolis, and the western half of St. Paul, delivering to breweries, coffee shops, groceries, and corner stores.

In fact, the sight of a Peace Coffee trailer loaded down with beans should be on every local cyclist’s bucket list. Seeing one of them cruise by never fails to bring a smile to my face.

“[The trucker] works really well,” said Drew Ditlefsen, one of the delivery bikers. “It’s steel and it can handle the strain. Everyone uses a heftier touring bike and studded tires.”

“One really bad winter, I did buy a fat bike, just for the ridiculous days with mashed potatoes on the streets,” Ditlefsen added. “But usually that’s a little too obnoxious. It’s a lot of work to pull, a last resort.”

The ubiquitous dirt and salty conditions add a regular winter maintenance regimen to the delivery routes, Ditlefsen and the other bikers end up cleaning their machines every night. That involves wiping down the chain, wheels, and other parts to get rid of the particles and grit, as well as keeping a sharp eye on the rest of the components.

“The salt does quite a number,” Ditlefsen said. “Yon don’t want to damage the rims and everything. Keeping the brake area clean and clear once it gets dirty is hard. It affects your brakes, and pulling 400 pounds you need all the stopping power you can get.”

That said, even after six winters and rusting out the fork, Ditlefson is still riding atop his original 4130 Cro-Moly steel frame.

On the other side of town, Micah Taylor and his partner Nate Hogue of Brake Bread began delivering fresh bread by bicycle around St. Paul almost three years ago. For Taylor, the slow-motion processes of bicycles and bread baking reflected the same kind of painstaking ethos, a way to escape today’s digital culture of speed and hurry.

“Our process is a slow fermentation, because we don’t use commercial yeast,” Taylor explained. “It takes a long time and good things come from that time. The same thing is true for transportation. We want to take a long time and enjoy health benefits of transporting ourselves from place to place.” 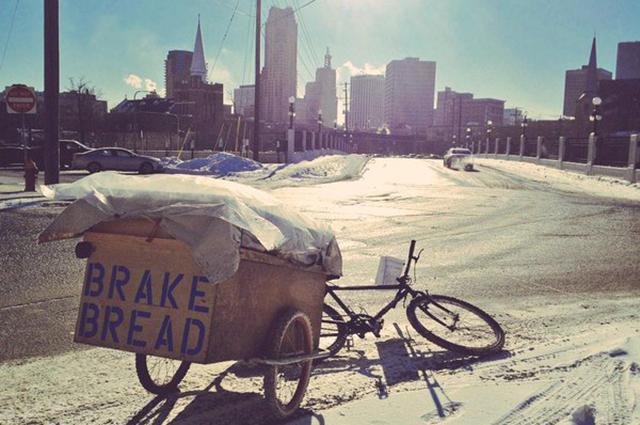 Courtesy of Brake Bread
For Taylor, the slow-motion processes of bicycles and bread baking reflected the same kind of painstaking ethos, a way to escape today’s digital culture of speed and hurry.

Like Drew across town, Micah Taylor rides a Long Haul Trucker, and still sometimes uses it to do bread deliveries himself.

As the business evolved, Brake Bread had a custom-made trailer constructed by Iowa-based Bikes At Work, outfitted with a special plastic shell bearing the Brake Bread logo. As with Peace Coffee, Brake Bread found that in addition to being a zero-emissions delivery technology, the rig makes for great advertising.

“It just made sense,” Taylor told me. “Frankly it’s faster to do all of that on a bike than it is in a car. We hop off the bike easier. And it’s an extension of what’s important to us. If we were going to do this, we weren’t going to hop in cars.”

These days, after opening a brick-and-mortar site on West 7th Street, Brake Bread has been able to hire a bike delivery employee. The idea of having a bike delivery person on payroll changed the dynamics of the business. When Taylor began three years ago, he “bullheadedly” insisted on using his single speed for deliveries. But today, they have added an “electric assist” to the mix.

“It’s better for the customer,” said Micah Taylor. “It’s been fantastic. [Sam, the delivery person,] is hauling a lot of bread, and on days like today, when it’s sloppy out, it gives him that assist he needs to get up the hills and deal with the terrain in different ways. It’s also better for us as an employer, because it doesn’t wear him out. He’s healthier and safer and can do multiple days a week.”

From extreme conditions to the joy of winter streets

When you simply stare out the window at the frozen city, focusing on a cruddy pile of slush, an icy street, or a fresh gust of snow, it’s easy to fall prey to agoraphobic dread. For thousands of Twin Cities homebodies, winter becomes an interminable test of endurance and escapism.

For both of these businesses there are moments where they’ve had to surrender to the elements and hop into a car to make the rounds. But according to Taylor, it’s only happened twice during the entire three-year run of bread rounds. (Once, because of an impossible-to-fix flat tire, Taylor ended up using a nearby car2go to unload the last of the fresh loaves.)

Likewise, Peace Coffee has a policy where delivery people are not forced to bike in dangerous weather conditions. For Ditlefsen, the No. 1 problem isn’t cold, but snow. Anything over 5 inches and it gets too hard to pull the trailer through the mush.

For me, the all-season deliveries offer an an added encouragement to get outside during even the darkest days. Overcoming the dread of the doorway, actually biking or walking the streets of the January city offers an unparalleled, and frankly surprising, degree of pleasure.

“On days like today, where it’s 30 degrees or sloppy, it’s my favorite,” said Micah Taylor. “There’s something about that sense of accomplishment. I don’t want it to be like be I’m better or holier or that kind of junk, but for me personally, biking in the winter just feels good.”

The feeling holds true for Drew Ditlefsen, despite (or perhaps because of) six years on the coffee delivery beat.

“I just love it, I love riding my bike,” Ditlefsen admitted. “In the winter, it’s really serene, really pretty. The change in everything is quite amazing. With the snow, things look clean and the river is beautiful. It’s enjoyable because there are moments of being alone, where it’s solitary and there aren’t as many people out as there and you get the city to yourself a little bit.”

Winter bike deliveries: The coffee and bread must go through