Om Arora, who has a Ph.D. in genetics, is closing up his video store for the last time. Arora’s small shop, Intercontinental Video, has long offered an eclectic mix of films from around the world from the corner of an 1890s brick building on the West Bank.

“I ran this store for the last 35 years, and you have come in on a day when I’m in the process of selling it,” Arora said after a chuckle. “Because of my age and sickness, I am going out of business.”

It seems that 2017 may be the year that technology finally erodes the last of Minneapolis’ video stores, even in a place as chronologically complicated as the West Bank, where people from all parts of the world mix in surprising ways.

The Video Lease on Lake Street closed months ago, and as far as I know, Intercontinental was the penultimate video store in Minneapolis (The Movies on 35th Street is still open).

Arora spent the week watching calmly as his stacks of DVDs were boxed by Scott Prost, owner of Video Universe in Robbinsdale (self-described as the last of the “good ones”). Prost is excited about the influx of Intercontinental stock.

“This is mostly stuff to sell, but the good stuff is all the foreign stuff,” Prost explained while sorting through interchangeable piles of soft-core. “We’ve been there in Robbinsdale since 1985. We carry everything: classics, foreign movies, TV shows and miniseries, American dramas, comedies, classics, and tons of kids movies. The most popular stuff in my store is “Star Wars” and “Harry Potter” stuff because I don’t think you can stream that right now.”

The modern internet era, combined with the proliferation of cable, has made the brick-and-mortar video store as obsolete as an elevator operator. Like CD stores, newspaper stands, and one-hour photo developers, certain types of retail are inherently at odds with stability.

“I just opened this as a hobby and it evolved into a store,” Om Arora explained. He founded Intercontinental in 1982 while working as a post-doc in genetics at the nearby University of Minnesota. Since then, he’s seen the neighborhood evolve. Two of the old brick buildings on Cedar Avenue have burned down on his watch, and the influx of new people and immigrants to the neighborhood is the only constant.

But no matter where they’re from, everyone likes film, and Arora’s store had always reflected the shifting tastes of the Cedar-Riverside neighborhood.

“One of the reasons I am going out of that is because this neighborhood has changed a lot,” Arora explained. “Now it is mostly the Somalis. Before that it used to be international people. and then the Chinese and Korean and Hmong. But now it’s mostly Somalis. They only watch Indian movies, and they mostly like to just get the copies, not the originals.” 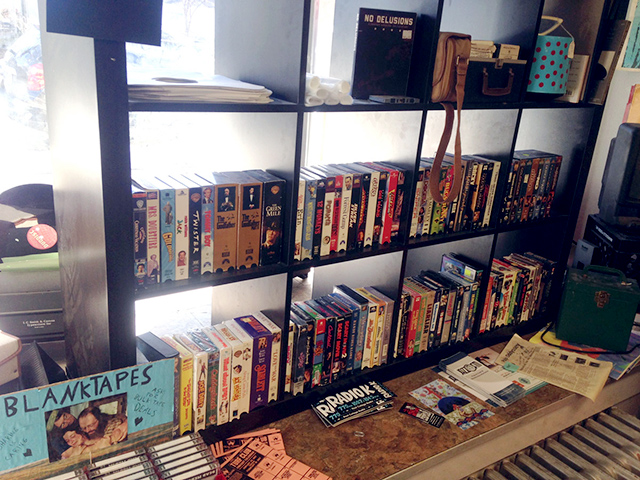 When I first began seriously exploring the streets of Minneapolis, video stores were still in their heyday. Pre-internet days, they dotted the landscape, attracting people like flies around dinnertime. Along Minneapolis’ old commercial streets, each seemed to occupy a specialized niche like so many tropical birds. Just north of the freeway, for example, Nicollet Village Video offered a spacious haven for lost souls and their dogs. Wandering its well-stocked aisles in search of the urbane, poking through curated shelves while punk played overhead, was a pleasure sorely to be missed.

In the late ’90s, I recall hunting down an obscure Swedish title as part of a film studies class in which I was enrolled. I called every store in town, and there were only two shops that carried “The Silence,” part of Bergmann’s existential trilogy on God. One was in Southeast on Como Avenue and the other on Hennepin Avenue in Uptown; I remember its yellow-and-black sign, though not what the place was called. I recall that shopping there was a snobby experience. You had to leave a $100 deposit, in case of loss or damage, and the clerk behind the desk donned the kind of critical authority found today in wine cellars.

“The last great place was in Seward, Filmzilla, and I remember Discount Video on Hennepin,” Paul Dickinson told me when I asked about his shelf of VHS.

Today Filmzilla is a laundromat, but just a few blocks away, Dickinson runs  Dead Media out of an old storefront on 25th Street. The small shop is crammed with outdated formats — records, VHS and cassette tapes, and (gulp) used books — not a video store, per se, but it does qualify as a place to acquire portable films. 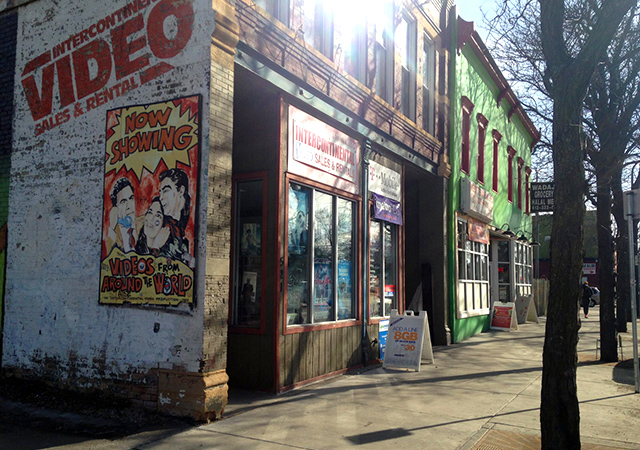 MinnPost photo by Bill Lindeke
Intercontinental Video has long offered an eclectic mix of films from around the world from the corner of an 1890s brick building on the West Bank.

“Since day one we’ve had VHS for sale,” Dickinson explained. “It’s a dedicated group of customers, and we rotate fresh stock from our magical stash of VHS. We sell a lot of ’80s, ’90s stuff; that seems to be what people like. I cannot vouch for their archival quality. That is maybe the downside of the genre.”

Curiously enough, as both Dickinson and Prost pointed out, VHS tapes are seeing a renaissance in the online aftermarket. Though VHS players are no longer produced, many people find that the old plastic tapes retain some allure as both a curio and as a format for the obscure.

“There are some very valuable VHS,” Dickinson explained. “They’re becoming collectible, because there’s a list of VHS [titles] mainly in cult film horror and different genres that will never be transferred to DVD, and will never be streamed either.”

These days, $10, the price of Dead Media’s three-box set of the Godfather trilogy, gets you a month of access to a seemingly infinite stream of pixels on Netflix or Hulu, enough to strangle the eyeballs of any cinephile. But compared to the time when a blue-and-yellow Blockbuster lurked on every corner, when Mr. Movies was where neighbors crossed paths, Redbox and Netflix mark yet another victory for placelessness. Romance evaporates when huddled around a vending machine in a gas station parking lot, though the act of endlessly paging through Netflix icons with a couch companion retains the remembered patina of a youth spent browsing.

When you ask him, Arora, who lives in Arden Hills, says he is looking forward to taking it easy. He’s philosophical about the end of the video era, the coming day when the ritual act of browsing an aisle of movies is another historical footnote.

“This is the last generation,” said Scott Prost, owner of Video Universe. “The kids I see coming into my store will probably be the last of the kids that will ever go to video stores.”

“Afterwards nobody will go,” agreed Arora, surrounded by stacks of DVDs.