You never forget the first time you encounter the chaos of a school pick-up zone. The line of SUVs poised like predators, waiting to speed away once they’ve acquired their kids, while giant yellow buses rumble past. Because of synchronized school times, it all happens in about a half an hour, and before you know it, the gnarl of traffic is nothing but a memory.

Or, that’s how it’s supposed to work. Often in practice, the pick-up and drop-off routine can be an extreme disruption.

“People line up 45 minutes before school lets out and let their cars idle,” said Ashley Shelby, whose daughter attends an elementary school in the Minnetonka school district. “It’s awful, [there’s] so much exhaust, and so much CO2, especially right near the school entrance. My pleas to the principal go unheard.”

In an era when more and more parents are driving their kids to school — because of inconvenience or the long distances involved with school choice — concerns like these are growing more common for parents. Often, parents driving kids become their own worst enemy. The more impatient people become, the more dangerously they are likely to drive, and the worse it gets for the kids on foot, and the fewer kids might walk. Thus the vicious cycle of kid-schlepping.

To try and stem the tide of cars, there are efforts underway across Twin Cities school districts to ensure safety and increase the percentage of kids who are walking or biking or  taking transit to school. This week marks the official Walk to School week, and schools all over the metro will be focusing on how to solve the kid commuter riddle.

Because of their low profiles, kids are especially vulnerable to speeding traffic, and in a country where the majority of new cars are high-bumpered SUVs or trucks, that becomes doubly dangerous around school areas. In Minneapolis, the Public Works Department maintains a four-year schedule where they consult and check-in with the city’s 100 plus schools, trying to unearth any infrastructure or signage changes that might improve safety.

“Out of this program we install addition school crosswalks depending on school patrol locations,” explained Steve Mosing, a Traffic Operations Engineer for Public Works.  “Through a more robust program with some capital funding, we installed yellow flashing beacon signs, and painted crosswalks to indicate where we want kids to cross.”

Mosing points out that changes to earlier school start times have been a challenge this year. Students and parents have shifted their travel patterns, causing different safety concerns around area schools.

The process is complicated from the school’s side of the picture, too. At each school, administrators work constantly with parents and students to make sure that everyone knows the safest thing to do during the intense departure and arrival times.

“Arrival and departure is always a work in progress,” said Jennifer Bordon, the Active Living Coordinator for Minneapolis Public Schools. “Schools are continually communicating with their community what their procedures are, and what is helpful. Sometimes we get off to a great start, but have to remind people when unsafe habits might start again.”

That sometimes means staff patrol the sidewalks of schools, waving arms at parents and kids, shepherding the buses and SUVs along their way. According to Bordon, the basic principles of school safety are ones of separation and reducing speed. The best schools are designed to separating buses far from any idling or speeding cars, ensure kids on foot or bike are safe amid the swirl of large vehicles.

The new bus lot in Richfield

Some schools are better than others when it comes to safe designs. One big challenge is any school located on streets that are already dealing with traffic and speed issues. This was the case in Richfield, where a pair of magnet schools sit on busy streets like 70th Street and 12th Avenue.

“It was a significant problem, with fairly significant safety risks for how it was playing out,” said Crystal Brakke, the chair of the Richfield School Board. “[They are relatively busy streets], and they were affecting people who lived nearby, on their way to work. We needed to so something about it.”

After the passage of a referendum that earmarked funding for school safety, the district reconfigured an obsolete swimming pool building this summer into a new school bus area, greatly simplifying pick-up and drop-off procedures. The new system allowed the school to separate the buses from the busy streets, reducing safety concerns and ensuring the elementary kids stay a safe distance away from the speeding cars. But changing to the new system hasn’t been entirely easy.

“This is a big change, and we’re continuing to have to do a lot around training,” explained Brakke. “We have staff members outside every day to let people know about how the new traffic patterns work. We believe it’s significantly safer than allowing pickup and drop-off on the street itself.”

The greater reach of charter schools

With school choice in place and an ever-increasing proliferation of charter schools throughout the Twin Cities, the percentage of students who are driven or picked up from school greatly increases, making the queue of cars even more extreme. That means that many charters or magnets have to create extra procedures for arrival and departure.

“My youngest goes out-of-district and driving is our only option,” explained Ken Paulman, who lives in West St. Paul. “Parents queue up and have a big card with the kid’s name in the windshield, and the kids are released to cars one at a time. Parents are discouraged from walking up to the door.”

That’s one popular system, but in other schools, elaborate instructions are posted to the websites, along with maps that attempt (sometimes in vain) to control the traffic pressures during peak times. 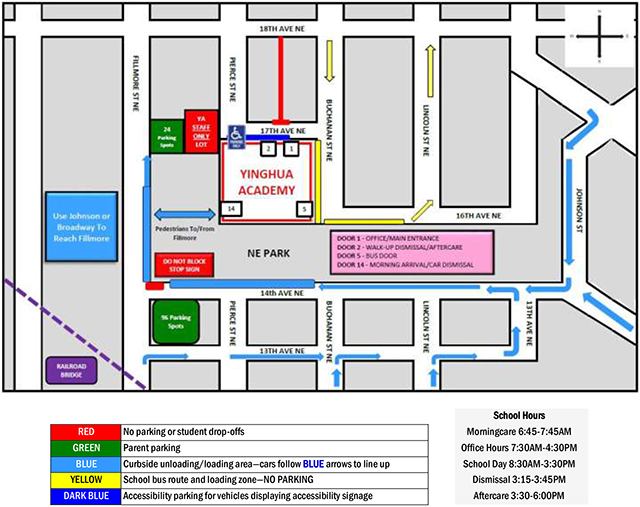 Meanwhile, in Minneapolis, a bus pass program has been in place for years that allows public school students to eschew the yellow school buses altogether. As Bordon explains it, the rules are based on distance from school. Depending on their age, if students live outside of a certain radius, they receive a free bus pass that allows them to take the regular city bus to school. Because of frequency, the bus passes allow more flexibility for young people to get around the city.

“As a a parent too I just really want to raise a generation of walkers and bikers and also transit users,” said Bordon. “For a lot of students, [having options] opens up possibilities. They can get to the library, do leadership before or after school. They don’t have not rely on one-time pickup, and it opens a lot of doors.”

Despite the sound and fury of the school drop-off rush, not all is lost for those who fondly recollect the day of kids walking to school. A series of federal grants called the Safe Routes to School program have been funding improvements for street crossings, crosswalks and encouragement and education programs aimed at reducing barriers for getting kids out of cars.

“These are a great way to introduce kids to bicycling, as well as teach those of them that might not have ridden a bike before, or have regular access to one,” said Fay Simer, St. Paul’s Pedestrian Safety Advocate. Simer’s department works with schools to increase safety for kids on foot and bicycle. For example, sponsoring programs like “bike rodeos” to teach bicycling basics.

“It’s just a really good entrée for schools too see and understand, and get a flavor of what teaching biking and walking can bring to classrooms,” Simer said.

This week is officially Walk and Bike to School week in the Minneapolis and St. Paul districts, and one-by-one the area’s schools will be trying especially hard to encourage kids and parents to try something other than the car. If they are successful, it would counter long-term trends, but it might also reduce the chaos of the twice-daily routines of schools, kids, and cars.

When it comes to getting kids to school, is there a better way?