A veritable “who’s who” of St. Paul government collected on Microsoft Teams Monday morning to celebrate an announcement by Mayor Melvin Carter and, representing Ramsey County, Board Chair Toni Carter. (Yes, they are related.) The gathering was to mark the largest investment in affordable housing in St. Paul history: $74 million devoted to the most neglected segment of the housing market — people making 30% or less of the Area Median Income (AMI).

It’s welcome news to anyone who’s been following the slow-motion housing crisis unfolding in the city.

“Long before the pandemic, we knew our community was experiencing a housing crisis,” Mayor Carter told the group. “With a diminishing housing supply, affordability gaps, stagnant wages and rising rents, we know it’s disproportionately hitting our BIPOC residents the hardest. It’s absolutely vital we address our housing crisis with a big vision that meets the magnitude of our housing crisis.” 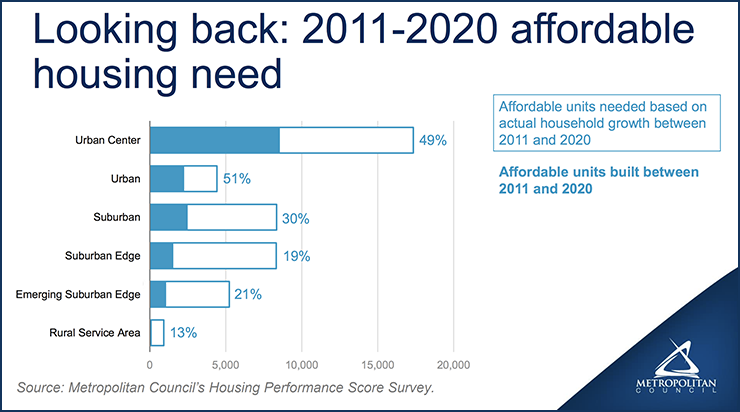 Joining the event were both of Minnesota’s U.S. senators, as well as Rep. Betty McCollum, whose U.S. House District covers  most of Ramsey County. And looking on were more members of the County Board, alongside five members of the City Council. The half-hour press conference was a rare coming together of nearly every elected official representing Saint Paul.

A big drop in a giant housing bucket

The announcement was a big deal. Affordable housing funding is an issue that everyone, everywhere says we desperately need, but it rarely happens in a meaningful way. A fund of this magnitude is a change that marks both significant progress, and highlights the overwhelming scale of the housing crisis.

On one hand, the $74 million number seems like a lot, especially in the context of local government. For some comparison, even with cities and counties recently increasing their housing subsidies, the overall numbers remain modest. The last few years, the City of Minneapolis has committed about $15 million into its annual budget for housing subsidies. Ramsey County recently pledged to spend $11 million a year beginning with the next budget cycle, and St. Paul has averaged less than $4 million over the last two years.

In that light, a one-time $74 million commitment is a step forward, and will help build at least 1,000 new 30% AMI homes in St. Paul over the next few years.

On the other hand, the money remains nowhere near enough. As County Board Chair Carter pointed out, right now there are 15,000 families looking for this kind of low-income housing county-wide. Even with the new funding, the supply is far short of the need.

Direct housing subsidies are a challenge simply because construction is so expensive. On average, the cost of building an apartment in the Twin Cities is around $300,000, and often far more. At those prices, the math is daunting: housing everyone who needs it in Ramsey County would cost around $4.5 billion. For the entire metro area, multiply that number by around three. Only state or federal allocations can make a dent on numbers like that.

Still, both things can be true: the investment can be both unprecedented and insufficient.

In this case, Ramsey County and St. Paul can give thanks for this one-time influx of money to  the America Rescue Plan (ARP), the pandemic relief that passed through Congress last year. It gave local governments the ability to allocate federal dollars at a scale not seen for decades. As Sen. Amy Klobuchar pointed out, making sure that the money could be used for housing was an important detail.

“We fought to get housing as part of the America Rescue Plan,” Klobuchar explained from her Washington office. “The Senate rules are crazy. The truth is that we went to the mat to get this done, without any support on the bill, to get money for housing.”

While many other cities have targeted ARP funding for housing subsidies, St. Paul’s City/County investment would be one of the country’s largest. (For example, Denver recently allocated $28 million of ARP dollars for housing subsidies, part of a larger $50 million housing relief allotment; Minneapolis’ number is similarly $28 million, though divided up in a very complex set of programs.)

Given the flexibility of the ARP money,  it’s notable that the St. Paul City / Ramsey County investment is specifically targeted to providing homes for those most in need of subsidy help to afford a home.

“I’m delighted,“ said Sen. Tina Smith, who chairs a key Senate Subcommittee covering housing issues. “This has a direct and immediate impact on the safety and security of families in Ramsey County and St. Paul. It is going to make a step forward addressing what is a supply problem, and one of not enough affordability.”

Part of the bigger housing picture

As Smith pointed out, the challenge of the modern housing crisis is that it is two problems in one. First, there’s a general shortage of homes thanks to years of building fewer homes than are needed, especially in growing metros like the Twin Cities. Second, stark inequality and persistent federal underfunding of housing programs creates a huge shortage of subsidized housing. Together, the two issues work like a pincer to drive up costs and create shortages, literally leaving low-income households and people of color out in the cold.

The city/county announcement is focused entirely on the second problem: the lack of subsidized housing, especially at 30% AMI. Right now in St. Paul, there are zero of these kinds of homes available. According to the mayor’s office, the fund will be doled out piece-by-piece, allowing city and county leaders to help housing development projects include affordability in their projects.

It’s certainly a good step forward, and the assembled politicians gathered this week were right to call the fund unprecedented. At the same time, my takeaway is that it’s still nowhere close to meeting the need.

The basic math of the problem means that only massive intervention at the federal or state level can truly solve the lack of homes for those most in need in U.S. cities. The ARP relief bill proves that, if politics somehow re-align, the federal government can and should spend money at the levels that cities need. 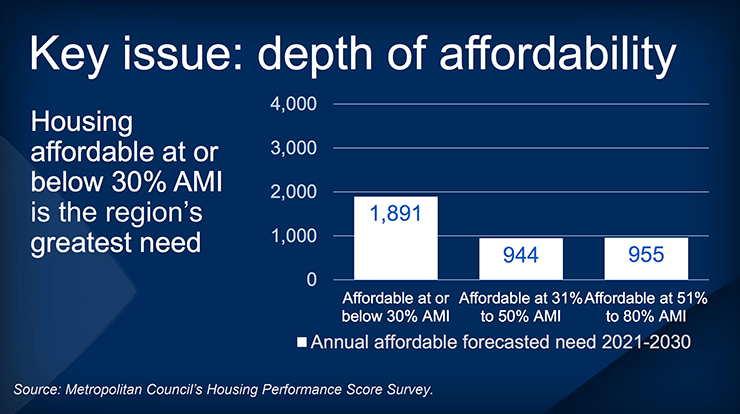 Given the desperate straits for so many people, federal dollars represent the only practical solution. Imagine a world where Congress invested $74 million per year into housing in Ramsey County. That might begin to offer stability to working class people struggling to find affordable homes.

We’re a long way from that outcome, but Monday’s announcement offers a glimpse at what is possible. Whether this is just a brief shining moment, where a crisis and a Congress came together, or sign of things to come remains an unanswered question.

Why St. Paul and Ramsey County’s $74 million affordable housing fund is a big deal — and not nearly enough