Walk through Loring Park on a warm Monday, and you’re more than likely to find 20 mild-mannered people taking turns shooting pucks with 6-foot metal cues, gathering them up on one end, and slinging them back the other way.

“The game is on the board,” someone yells from the next court over, followed by the distinctive high-pitched whizz of a puck sliding along the cement.

This is the Loring Park Shuffleboard Club, which hosts a long-standing, public shuffleboard night in the heart of downtown Minneapolis. The fun begins when you join in.

Because of the scoring system, shuffleboard turns on a dime, points swinging by thirty or more in a single round, from positive to negative or vice versa. Because each team can shoot pucks at each other, they can whack their opponents’ pucks out of the high-score sweet spots.

“The game is off the board!” the same voice rings out seconds later, letting everyone know that one team is no longer about to win … at least for now.

The Loring Park shuffleboard courts are one of the least likely spots in the Minneapolis vaunted park system. Whenever there’s action on the court, passers-by do double-takes, come up to the chain link fence and say, “What’s that?”

It’s such a regular occurrence that someone in the Shuffleboard Club often serves as an ad-hoc public ambassador, explaining shuffleboard to the curious or teaching newcomers the ins and outs of the puck, cue, and odd chalk scoreboards.

Outside of the periodic Brooklyn trendiness, shuffleboard isn’t exactly a popular pastime. The Loring Park courts date to 1939, built during the waning years of the New Deal-era Works Progress Administration, which employed out-of-work Americans for civic construction projects. They sit on the east side of Loring Park, easily the most obscure of its activity centers.

“Aside from the ’70s, it’s been continuous shuffleboard play in Loring Park since 1939,” explained James Ockuly, one of the founders of the Loring Park Shuffleboard Club. “Every once in a while [the Park Board] threatens to tear the courts down, and either rebuild them smaller, or get rid of shuffleboard altogether, but so far that hasn’t happened.”

The current iteration of the Shuffleboard Club began in the mid-1980s when a Loring Park resident named AJ Galazen entered the picture. After months of wandering by the long-shuttered courts, Galazen’s curiosity was piqued. When he found himself shopping at Steeple People, the local thrift store, Galazen spotted a set of used shuffleboard equipment. He went to the Park Board to asked permission to use the courts, they said ‘yes,’ invested a bit of money to spruce up the old concrete, and the Loring Park Shuffleboard Club was reborn.

In the 40 years since then, the Club hasn’t changed all that much. There’s been some ebb and flow of popularity, as trends and times have changed. The club got brand new cues right away, at some point the Park Board added lights, and a while back the Board and the Club raised money for a new equipment shed. Just this year, the lines and scoring triangles on the court got a fresh coat of shiny white paint.

“Since 1985, it’s been continuously used by our group on Mondays,” said Ockuly, who began helping Galazen run the group in early years. “It used to be two nights a week, and then we shortened it to one night a week. In the 1990s, it got really serious.”

These days, the most obvious change is that all the regulars keep getting older. (Myself included: I used to come down and play with the Club 15 years ago, during the Music and Movies in the park era.) Ockuly jokes that each year they’re less like the 1980s hipsters of old. 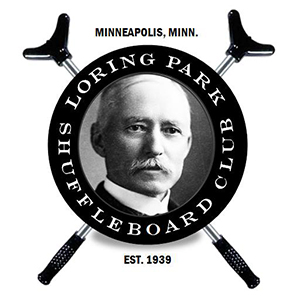 Still, the easy timelessness of shuffleboard is probably its foundational beauty. The game is fun without being taxing, and competitive with just enough randomness to keep it from being personal. Plus the 80-year-old benches serve as great places to rest and chat in between rounds.

Last week, I went down and played a match with a Northsider named David, another former regular returning to the shuffleboard courts after a long hiatus. Though neither of us played well, we both picked up the old game within minutes. Thus the official motto of the Loring Park Shuffleboard Club: “It takes minutes to learn and a lifetime to master.”

“You can come in, and on any given night, someone playing for their first time could beat a long-time player,” said Ockuly when I asked him about the charm of the game. “You can pick it up really quickly, but even after all the time we’ve been playing, we still feel like there’s a challenge to it.”

Most weeks, you’ll find newcomers on the Loring Park courts. This past Monday, it was a group of three 20-somethings who had returned to the courts for the first time.

“I feel very competitive for having played like two times,” said Peregrine, an Uptown resident and one of the newcomers.

“We heard about the league from one of the ladies here,” her friend Dylan explained. “You can get into it pretty easily. You just shuffle it around and, ‘oh,’ you get some numbers. And you can play with other people, play with friends.”

In between shooting the pucks, the trio brainstormed new trash talking terms that might be useful in Gen Z circles. To my eye, the list was grim — “Watch out for the hammer!” and “I’m going to shuffle you” were the best so far — but they were working on improving their banter.

The rules are pretty simple: Each team shoots four plastic pucks into a triangle at the far end of the court, and points go to pucks sitting within the triangles. Loring Park house rules include “double digits,” so that you score double points if your puck is touching one of the freshly-painted numerals.

Another pro tip: If you really want to get the full shuffleboard experience, don’t be too late. The group picks randomized teams promptly at 7 p.m. If you get in on the initial game, it’s a great way to learn the ropes and make friends, whereas latecomers often have to hope for stragglers to show up.

“We are very wiling to teach you, and it’s a great group of people,” explained Lauralie, another long-time regular. “Kurt is always willing to teach people if you’re patient.”

My Monday match with David went on for many rounds, back and forth from positive to negative as the sun set behind the Minneapolis Basilica. Not to toot my own horn, but eventually I pulled ahead, shouted “The game is on the board!” and scored a double-eight to win.

“After 20 years, what do you think has changed?” I asked David, shaking his hand after the match.

“What could change?” he replied.