And as two recent examples from St. Paul and Minneapolis show, FAR might be becoming a more useful tool in the future as cities look to double down on old-school urban density.

The program is modeled after the popular “Master Gardener” designation, only instead of tangible plants, participants are given the fluid task of caring for ever-moving water.

Getting involved with a park project has become a piece of the curriculum at Gordon Parks High School in St. Paul.

As it turns out, this amusing term is not a new Lowertown restaurant, but denotes the triangular sliver of concrete created by free-flowing right-turn “slip lanes” at intersections.

Instead of prepping for an economic doomsday, local groups are adopting the motto “keep it in the ground,” and beginning to make carbon reduction changes on their own.

The new Minnesota Museum of American Art show offers a well-crafted slice of artworks focused on representations of urban change.

John Akre’s new film is set to debut at this weekend’s Square Lake Music and Film Festival near Stillwater.

St. Paul has interesting downtown fountains. The small plazas of downtown Minneapolis seem empty by comparison; most of the city’s fountains can be found in the parks.

These “Flamingo Friday” events have the potential to spread and fill in some of the gaps in the fragmented urban fabric.

The Lowry Grove community is a 15-acre manufactured home community in the southern tip of St. Anthony, just across busy Stinson Parkway from the northeast Minneapolis border.

The motto mystery leads to a fascinating look at St. Paul’s early projections of its image.

Some do it right: Nobody’s racks are more impressive than the ones at Surly, the giant “destination brewery” that opened up over a year ago right along a well-used bike path. 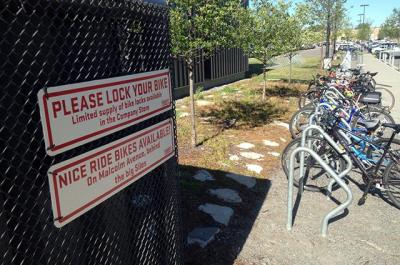 Paper City is a monthlong collective construction session meant to break down divisions between theory and practice, architecture and play.

Particularly in their cultivation of younger people from within urban communities, St. Paul’s and Minneapolis’ approaches offer some examples of the creativity that will be required.

After years of community work, a “test greenway” has been installed along a half-mile of Irving Avenue North. The official greenway kickoff is this Sunday, an all-day event with a ribbon-cutting ceremony at 5 p.m.

By the numbers, the University of Minnesota remains the epicenter of the Twin Cities’ bike scene. It’s also the place where crappy bicycles are constantly abandoned.

As with the Open Streets concept, it takes a lot of persistence to get new ideas accepted and carried out.

Visual artist Kit Leffler will be embarking on an artistic treasure hunt to trace some of the Twin Cities’ oldest European history.

This year people from Minneapolis’ intentional communities are pushing changes to the city’s housing ordinance.

If the Twin Cities’ public art experts are right, the new artwork for the U.S. Bank Stadium is a missed opportunity.