Hungry? Most of us head for the cupboard or refrigerator to rustle up some food without a second thought.

But, according to a report released today, 13.8 percent of Minnesota households last year didn’t have enough money to buy food, much less to pack it away.

Further, in Minneapolis and northeastern Minnesota, in the 5th and 8th Congressional Districts, the numbers of households experiencing food hardship in 2009 topped 17 percent. Numbers are detailed in a chart below.

Before focusing on local details, however, take note that our numbers are better than most other areas of the nation.

Only three states did better: North Dakota, South Dakota and Iowa. Forty-seven others, including the District of Columbia, had sobering, higher numbers, with Mississippi topping all with 26.2 percent experiencing what is called food hardship. 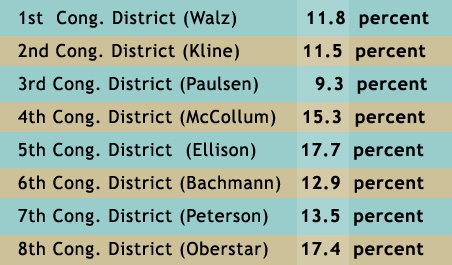 In Minnesota, food needs are tempered by an extensive network of nonprofits, churches and government programs, as well as lower levels of unemployment.

What’s notable about the study, released by the Food Research and Action Center, is its timeliness — the U.S. Department of Agriculture releases so-called food insecurity numbers but the data is older and often covers three years. Also, for the first time, the new data is available for 100 of the largest Metropolitan Statistical Areas (MSA) and for each Congressional District across the United States.

Compare the new numbers to a survey by the USDA for the years 2006, 2007 and 2008, which showed an average 10.3 percent of Minnesota households facing food insecurity.

Congress, take note
Gallup did the survey, collecting data almost daily from 1,000 households from January, 2008, through the end of 2009 for the Gallup-Healthways Well-Being Index Project.

Other findings, as released to news media by Hunger Solutions Minnesota, a statewide partnership of organizations fighting hunger, shows:

In the Minneapolis/St.Paul/Bloomington MSA, the food hardship rate for households overall was 13.9 percent. But 18.6 percent of households with children reported scarcity of money to buy food.

More than 1 of 10 residents in seven of eight Congressional districts reported food hardship. The exception was the west metro 3rd District, including Minnetonka and surrounding communities.

“These new data reaffirm what we’re seeing in our local communities and provides a current, on-the-ground look at how pervasive households’ struggle with hunger have become in today’s economy,” said Colleen Moriarity, executive director of Hunger Solutions Minnesota. This is evidence, she said, that “more must be done, and quickly, to help struggling families.”

Last June, to meet the need, Hunger Solutions helped develop the Minnesota Food Helpline. “It’s easier to call us first to see if they qualify for food support program than to walk into their county office,” explained Jessica Francis, supervisor of the program and associate director of Hunger Solutions Minnesota.

‘I’m so embarrassed’
Many knew of food stamps but had no idea where to go to apply or whether they would qualify, so the helpline staff asks a set of questions to determine whether a person qualifies for food aid.

“They’re calling because they’re at the end of their rope,” Francis said.

Staff can also direct callers to emergency help such as food shelves, local Loaves and Fishes programs and how to expedite applications for food aid in crisis situations.

There was, for instance, a Woodbury woman Francis talked with on a recent Thursday. She said she was a single mom who had had no income since September and only occasional child support and her daughter was coming home from school in an hour and she didn’t have any food to feed her.

So Francis ran the woman through the questions and told her she was likely eligible for food aid. It was then the caller said, “I’m so embarrassed” and yet started crying with relief.

“People don’t want to admit to themselves or anyone else how bad things are getting,” Francis said.