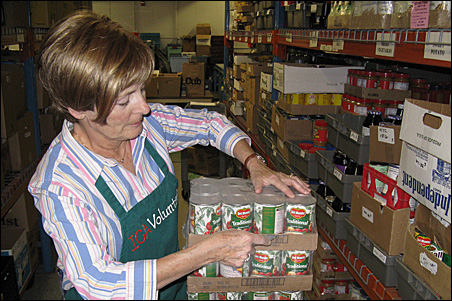 Sandi lives in the St. Paul Park area with her husband and two children. She came to a local food shelf this week so she’d have food on the table.

Her family was making ends meet — able to pay their monthly mortgage and feed and clothe their two children — until a little over a month ago when her husband, an over-the-road truck driver, was cut back to a 20-hour work week.

“They didn’t have enough work for him,” said Sandi, 40, who is embarrassed by her situation and told her story only on condition her last name not be used.

Sandi and her family are among a growing number of Minnesotans — many from middle-class backgrounds — who fear going to bed hungry and are turning to emergency food shelves.

The number of Minnesotans walking through those doors to gather up grocery bags full of such items as cereal, milk, ground beef and canned peaches rose 24 percent between 2008 and 2009, according to Hunger Solutions Minnesota.

Add up all visits to food shelves, including multiple visits by the same people, and the number rises to 1.9 million visits.

That’s a tidal wave of need yet so far it’s being met with substantial federal government help, according to Hunger Solutions, the agency that funnels aid from the feds to the state’s six regional food banks and on to 290 food shelves around Minnesota. Private sector donations of cash, food and volunteer hours also provide major support for food give-away programs. 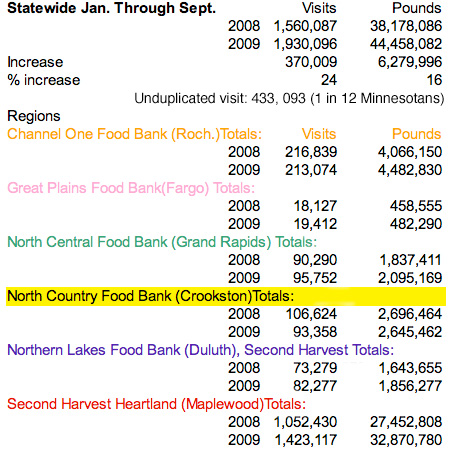 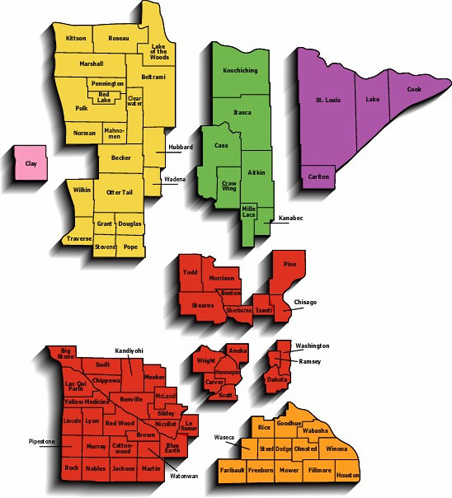 Use is up at five of the six food banks around the state, though numbers have decreased in the Crookston area, a phenomenon Hunger Solutions staff is investigating. Among the explanations: local food shelves might have decreased their hours because of lack of food or staffing. Or, former users may now be receiving food stamps.

Numbers on the rise
But in the Twin Cities, the numbers are headed in the up direction.

“Last week was our heaviest ever: 183 families in one day,” said Michelle Rageth, who heads up Friends in Need Food Shelf in St. Paul Park, the food shelf Sandi and her family turned to for help.

In fact, their numbers have been rising ever since she came to Friends in Need in 1998, Rageth says, when the organization served 3,000 people. Last year, they gave out one million pounds of food and fed 20,000 people, a startling increase for an agency that serves a four-community area with a stable population.

The numbers are rising as well at the ICA Food Shelf, which serves the Minnetonka area, and where need is up 30 percent. In December 2008 the food shelf served 500 households; last month it served 653.

“We’re feeling the wave and the effect of housing and job losses. We’re seeing people brand new to the system who thought they would never be in need,” said Cathy Maes, ICA’s director. Among the visitors are familiar faces, she said. Some of last year’s donors are this year’s recipients.

Rageth agrees. “We’re just seeing so many more middle-class families that have never had to be at a food shelf,” she said, “people who worked at large corporations, now they’re delivering pizzas. We’ve seen lots of homeless, including homeless families. We have lots of families living in cars.”

Late in paying mortgage
In Sandi’s case, she works half-time as a nursing assistant at a health clinic, where she’s able to buy health insurance to cover the medical costs of her daughter’s epilepsy and her own depression. Her husband has been the main breadwinner; she brings home only about $200 every two weeks.

Their diminished income means they’ve been late in paying their mortgage and are substantially behind in utility payments, though they don’t meet standards for additional help. 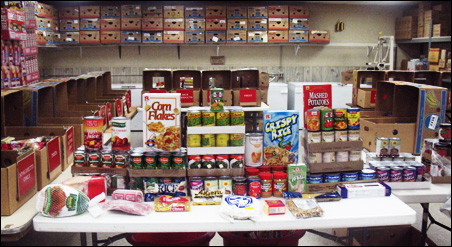 Photo by Jill Hiebert/Hunger Solutions Minnesota
Packages of food at the ICA Food Shelf in Minnetonka.

The emergency food shelf program was a godsend. To tap in all Sandi had to do was bring a photo I.D. and proof she lives in the area, say a utility bill. (The homeless will be served regardless and those coming from other communities receive food to tide them over until they can get to their local food shelf.)

That means the system is an easy first step for those seeking help, in contrast to heading to a county office to apply for food stamps or other financial assistance.

So Sandi comes weekly to Friends, this week going home with a bag and a box of food: canned goods, rice, cereal, milk, chips, frozen meat, toilet goods, soup and beans and a half-gallon of milk.

“You get a lot of box stuff,” she said, adding that she occasionally finds a food item past its expiration date — sometimes found in donations contributed by individuals.

‘Saving grace’
Food shelves are widely supported by financial contributions from the private sector, including businesses, individuals and religious groups, as well as by volunteer workers. (For instance, Marathon Petroleum provides housing and pays utilities for the Friends in Need Food Shelf.)

But Moriarity of Hunger Solutions says “the saving grace” of food shelves these days has been the federal The Emergency Assistance Food Program (TEFAP), boosted by economic stimulus dollars, as well as food enabled by Congress’ passage of the farm bill. That translates into about 25 semi-truck loads of food delivered to Minnesota every month. 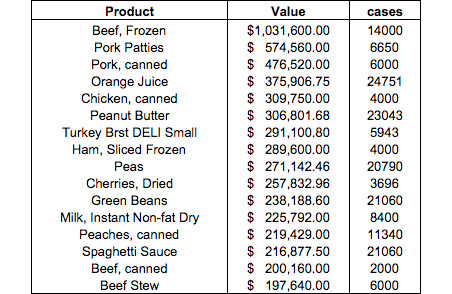 On average, Moriarity said, food made possible through federal programs makes up about one-third of the product at food shelves, meaning more food for more people with no impact on food shelves’ budgets.

At ICA, the TEFAP food is about 25 percent of their supply, providing such items as blueberries and nuts and lots of meats, said Maes. “It’s your government dollars working well, in my opinion,” Maes said.

Calling it “a blessing,” Rageth said in a phone interview that about two-thirds of Friends in Need’s food supply comes thanks to the food aid, allowing them to stretch their dollars and enabling the service to send clients home with 49 pounds of food per person.

That means the institutional-size freezers and refrigerators at Friends this week are filled with: pizza, chicken, hamburger, turkey, milk. On the shelves are such items as cookies, baked beans, corn and green beans, canned fruit and juices, diced tomatoes, spaghetti sauce and toiletries, she said.

And for those living in cars or hotels without kitchens, Friends in Need distributes self-heating cans of beef stew or chicken and dumplings, a donation from the Minnesota National Guard.