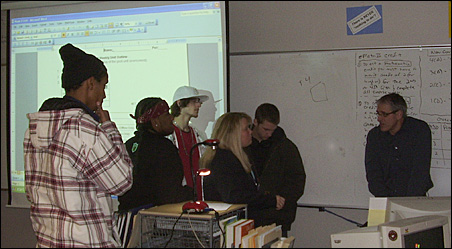 MinnPost photo by Cynthia Boyd
Surrounded by his students, teacher Bob Schneider is the linchpin to a new E-math class at Edina High School, featuring math lessons and testing on computer. A closeup of the computerized math program is projected on the white board in the background.

Edina High School principal W. Bruce Locklear was talking about “math deficient” students, those kids who have failed or are at-risk of failing math graduation standards tests and thus likely to leave school without a diploma.

And, since it reflected a grain of truth, he was using a little humor with his audience at a recent Association of Metropolitan School Districts meeting.

“Inevitably we were waiting on some divine intervention to teach them math and it wasn’t working,” Locklear said wryly.

So, for those kids not making the grade in math, Edina is trying an experimental approach: E-math classes, a hybrid of human and computer-generated math tutelage.

Better methods
Schools all over the nation are searching for ways to better teach kids, not the least because not having a high school degree today pretty much ensures a life close to poverty. Nationally, every 26 seconds a young person drops out of school.

Dropouts are no less a concern in Minnesota where high school graduation rates are on the higher end of the scale, though varying between 79 percent and 91 percent [PDF], depending on whether it’s educators, the feds or the state reporting, with students of color graduating in lower numbers.

Edina’s E-math is math — addition, subtraction, algebra, geometry — only taught in a different way at the student’s pace, Locklear said.

Students learn from their teacher and from Plato Learning, a computerized learning curriculum. If a student does not pass a computer test indicating mastery of a specific math unit, he or she goes through a tutorial, practice and another test-taking. With a pass, the student moves to more advanced subject matter.

Other districts are trying computer-assisted teaching approaches such as this, including Minneapolis and Grand Rapids in north central Minnesota.

To check it out, last week I visited an E-class of 27 juniors and seniors at Edina, a Minneapolis suburban school that has received impressive national school rankings and can boast 17 seniors as National Merit Semifinalists. A few clicks on the state Department of Education website shows the school also had an 88.8 percent [PDF] four-year graduation rate in 2008. 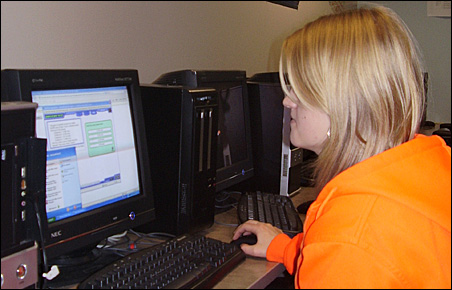 MinnPost photo by Cynthia Boyd
About the E-math class, senior Jackie Silverman says, “I really like this class because it’s more directed at me.”

I met Bob Schneider, one of two teaching the classes in the second year of the program. Last year, Schneider says, there were 100 students. “We kind of felt all those kids were at risk of not passing.”

Ten or 12 of the 30 who took it passed the graduation portion of the Minnesota Comprehensive Assessments (MCAs), Schneider said, calling that a “significant number.”

Schneider praises the program. “It takes kids where they are and it moves them at the rate they can go,” he said, but only if the kids apply themselves. They’re expected to do homework “at least” five nights a week.

Flawed courses
Teachers monitor the students’ workload and progress, knowing if they’re learning by whether they’ve passed a mastery test and interceding with help when necessary.

“I would suggest the achievement gap has its roots right there,” Schneider said.

Classes move ahead too fast for some. Also, there’s grade inflation, Schneider believes, where kids earn extra credit by bringing in boxes of tissue or cleaning the boards to add points to their math scores.

Schneider said pre-MCA testing of 180 students not enrolled in the E-math showed about 90 “in deep trouble,” and “needing support,” including some students who had earned A’s and B’s in math classes. A fifth section of E-math is being created.

“If you have the credit, that’s awesome; now we’re going to give you the learning,” he told his class.

Ask students how they rate the class and opinions vary.

“I really like this class because it’s more directed at me. It helps me with math skills I haven’t acquired over the years,” said senior Jackie Silverman, who so far has passed all grad standards tests but the math portion.

Still, success comes down to a student’s desire to learn, Schneider said.

“There’s no margin for error here, when I say let’s get focused, I mean let’s get focused.” That means, he told them, hunker down and get ready to learn. Then he scolded them for the misbehavior of two of their classmates who the previous day had been sent out of the room but had not gone where directed.

“This is the crap that takes away from our learning,” Schneider said.