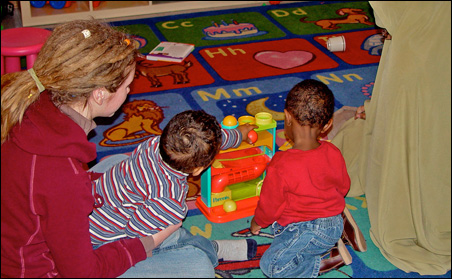 It’s a little tricky finding the East African Women’s Center, housed as it is in a one-story building in a winter-cloaked courtyard engulfed by high-rise apartments in the Cedar Riverside neighborhood of Minneapolis.

Tricky that is until to you see red and yellow playground equipment and a walkway worn clear of snow by the feet of mothers and their children. In a real way, this is their pathway to the American dream.

Not likely. Read on and hear their stories. Twenty-two women were enrolled at the center in English and life skills classes last year, learning about child development, nutrition, health care and parenting as well as the ways of American society.

Here’s Kali, wrapped in her hijab, the traditional Muslim head covering. “Three years ago when I came here I didn’t know how to teach my children, how to buy them books, teach them the rules for school, teach colors and sharing,” she said.

Now she’s a staff member with the program, feeling more comfortable day after day in her adopted homeland.

While she and the other mothers learn, their children do too, 23 infants, toddlers and preschoolers last year. Just watch as they play, learning to share giant Legos in a bright room decorated with ABCs.

Then talk to the head of the neighborhood charter school who praises these youngsters’ school readiness.

Problem is, recent funding cuts are endangering the five-year-old center’s programs. Already morning childcare that allowed mothers to attend English classes had to be cancelled, as was an after-school club for girls.

The center had received 40 percent of its funding from the federal Office of Refugee Resettlement but late last year that agency severely cut its grants, funding only 17 of 140 proposals, explains Doroth Mayer. Now she’s scrambling for other grant money.

Magnet for immigrants
Mayer heads up the center, plopped smack dab in the middle of Riverside Plaza, a cluster of apartment buildings perched on the West Bank of the Mississippi River not far from downtown Minneapolis. It’s an area that’s been a magnet for immigrants for generations, most recently families from Somalia and other East African nations.

And like the generations before them, these immigrants need to bridge the chasm between old and new cultures. Mayer sees mothers as that bridge.

“Young mothers are the cornerstone of the family if successful integration is going to occur. I truly believe and the women I work with agree, that the mother plays the most key role in that happening, The sad part is they are getting the least focus,” Mayer said recently.

“Unless we begin focusing on women, on mothers, on mothers with small children, the children are going to pay the price,” Mayer said. If these mothers don’t know English, “you’re putting a lid on these families.”

Yet it is way too easy for these young moms to fall through the cracks, she said. Busy bearing and rearing children, they move in and out of English classes, most plateauing at about the third grade level, she said. Only the center doesn’t let them do that. “We go after them. They don’t quit on us. We don’t lose them.”

A couple of years ago the center won the 2008 Minnesota Non-Profit Mission Award for Innovation, in recognition for their efforts to both support traditional East African culture and help ease these women into their new culture.

Now five years old, the program is a remarkable collaboration of efforts, pulling in experts from neighboring Augsburg College and the School of Nursing and Family Social Science Department at the University of Minnesota and partnering with Cedar Riverside Adult Education Collaborative for English classes.

They’re seeing good educational results in the children coming from the center.

“Students [who came] from that program are much more kindergarten-ready than those who did not,” said Ricky White, executive director of Cedar Riverside Community School, a neighborhood charter school with about 95 percent children from Somalia.

“It doesn’t have anything to do with intellect,” White continued. Rather, children in the center’s program learn school readiness skills, such as how to behave in a structured environment, how to make friends and relate to others. They learn the importance of listening and following directions, he said. “They know their ABCs, they can count, pretty much spell their names,” he said.

Plus, “Mothers in that program are able to advocate for themselves and their students because they have more confidence not just in their English, but in using resources in America available for families. They come here, they volunteer,” White said.

Changed lives
Hear these moms, five from Somalia and one from Ethiopia, hunkered down on old chairs and sofas in the center’s activity room, describe the difference the center has made in their lives.

They won’t share their last names, only first: Shamso and Abshiro, Kali, Halan, Asha and Fedumo. That’s a rule at the center, Mayer said.

Still, they’re anxious to talk about how the center has changed their lives.

Before, they’d hardly leave their apartment homes, they said. They lived in the United States but felt apart from it for their dress, and because they didn’t speak the language or understand the culture.

Now, according to Mayer, not only are the women making significant gains in English language skills, one of the centers English/transition classes is evolving into job development by preparing some of the women for high school equivalency testing and for earning Child Development Associate certification.

Now they’re taking their children to the public library, volunteering at school, taking field trips to the Science Museum and the Minnesota State Fair and an occasional restaurant, buoyed by their increasing skill with English and this little community of women. They’re integrating.

They cook wild rice soup and they use sewing machines to fashion aprons, purses, quilts and more, learning English and culture as they work, they say.

And they’ve learned the importance of English. “When I came here, the kids’ homework was too hard for me.” Asha said. Now she helps them with schoolwork.

Said Abshiro, who left Somalia eight years ago, “My teacher teach me to show love to my child by teaching to sit down, read book before sleep, do homework.”

That’s huge, says Mayer, because traditional parenting allows Somali children less structure. “I would try and hold a child in my lap and try to read to them. They couldn’t sit still for two minutes. Now they follow you around with a book,” Mayer said.

But now, because of funding cuts, Asha has to drop out of English classes because the center can no longer offer childcare to her children, ages 1 and 3. “I’m not feeling happy,” she said.