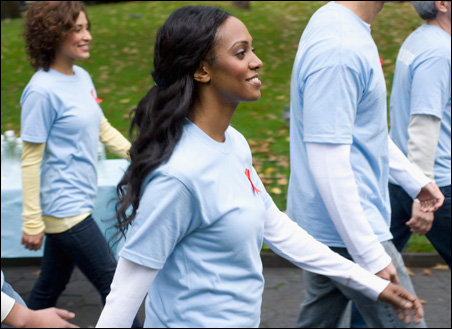 Last week’s HIV news from the state Department of Health focused on the startling 13 percent increase in new HIV cases in 2009, with young males showing the largest spike.

They, too, were mentioned in the Department of Health news release:

“Although the number of new cases in women slightly decreased to 73, women of color were overrepresented, accounting for 74 percent of new female cases.” African American women made up 27 percent and African-born women tallied 30 percent of the 2009 cases, according to the report.

That uptick among her sisters is why Johnson, a disease intervention specialist with the state health department, is spreading the word about the fourth annual National Black HIV/AIDS Awareness Day Community Breakfast Feb. 9 in St. Paul. She told me about it at a community meeting last week where she was passing out flyers. (Details about the breakfast can be found at the end of this post.)

Did you know, she asked, that AIDS is the leading cause of mortality for black women ages 24 to 35 in the United States? “It’s shocking there’s not more attention given to it,” she added when I called her for details.

Changing behavior
Further, it’s hard to get the word out, to increase awareness and teach prevention to the black community. “With this community, you’re competing with other issues such as poverty and violence,” she said.

“It takes all of us to make a change and a difference, each talking to a loved one to change their behavior, to [encourage] safer practice; screening partners, going in for testing as part of the dating process,” Johnson said.

That’s part of the message speakers — including a person living with AIDS, an HIV health worker and a physician — will give at the breakfast. To put it into perspective, as of Dec. 31, 2009, those in Minnesota “assumed alive and living with HIV/AIDS” tallied 6,611 persons.

The event is aimed at raising the awareness of young men and women particularly about the dangers of unprotected sexual activity.

There’s more to learn on the report from MinnPost’s Craig Bowron.

And here’s practical info, culled from the department’s news release:

“HIV infection remains highly preventable; although health officials emphasize that there still is no cure or vaccine to stop HIV/AIDS. Ways to prevent or reduce the spread of HIV include avoiding or delaying the start of sexual activity, using latex condoms consistently and correctly and avoiding the sharing of needles or equipment to tattoo, body pierce or inject drugs.”

Johnson wishes the dangers of AIDS and HIV would rise in the public consciousness to the level of breast cancer. Who, she asks, doesn’t see that ubiquitous pink ribbon and know what it stands for?