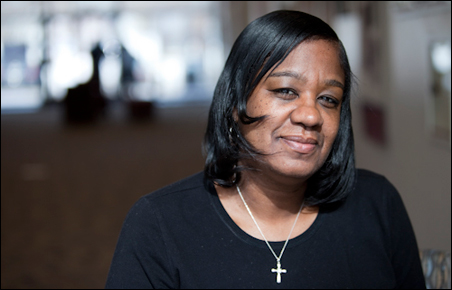 MinnPost photo by Terry Gydesen
“I survived hell,” says Doris Miller Johnson, who saw the life of sex trafficking up close and walked away.

It’s not like prostitution is a career choice, says Doris Miller Johnson. It’s the default choice in a life gone wrong, a life deeply bruised by abuse, addiction or homelessness, mental illness or desperation.

Miller Johnson saw that life up close and personal until she walked away. So when she heard about a project in North Minneapolis to establish a drop-in space for women and teens engaged in prostitution, she signed on to help.

“They need somewhere to go and eat and to change their panties, a place just to be loved, just for a moment. And maybe they might decide one day to change the way they [are] living,” said Miller Johnson, a striking, out-going woman who wears a silver cross around her neck.

To be housed in Kwanzaa Community Church in North Minneapolis, Northside Women’s Space would be a refuge from johns trolling the area on and around Broadway, Emerson and Fremont. It would be a point of connection.

Here women could wash up or use a phone, take light refreshments and connect with community resources. They could sign up for health classes, counseling, job search support, chemical dependency referrals, HIV/AIDS services and spiritual direction, if desired.

Though planners hope to open the doors in May, there’s at least $15,000 to be raised first and issues yet to be resolved. Still, a recent open house demonstrated a groundswell of support. Plus, there is apparently nothing else quite like it.

From the beginning
At the genesis of the project is Lauren Martin, a researcher now with UROC, the Urban Research, Outreach/Engagement Center at the University of Minnesota.

Step back to 2004, to when Martin, just having earned a Ph.D., was called in by the Jordan Area Community Council in North Minneapolis to survey those engaged in sex trade on their neighborhood streets. Residents were “fed up with it,” she said. They told her, Martin said, “Here’s a problem, use that Ph.D. to help us.” 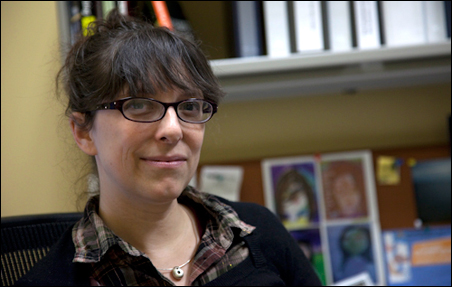 MinnPost photo by Terry Gydesen
Lauren Martin said that while researching sex trafficking, women she talked to expressed a common need: They wanted a safe place, a “place to sit down.”

There was widespread concern about the increasing numbers of women involved in sex trafficking and their health. By comparing police mug shots of the same women, community leaders could see they looked sicker each time they were arrested, Martin said.

“Remember the billboard campaign, ‘The Faces of Meth?’ Well, it was that bad,” she said.

The research
So, between 2005 and 2007, and then working for Folwell Center for Urban Initiatives, Martin advertised for people wishing to participate in a survey. She surveyed 155 people, self-selected as having traded or sold sex or sexual activity. That included people who traded sex for food, money, drugs or a place to stay. They had to be 18 or older and have lived or worked in North Minneapolis.

Her research work is supported by the Center for Urban and Regional Affairs (CURA) at the University of Minnesota.

The research, which Martin is preparing for publication, covers a broad range of topics, from gender and sexual orientation to health insurance and drug or alcohol use. Interestingly, nearly half “exchanged sex less than once a week.”

But standout numbers are these. Respondents were:

• 44 percent having a high school or GED degree

• 90 percent unemployed, with many using social services such as food shelves, temporary housing and job training.

• 70 percent having health insurance, with most of that being publicly funded medical assistance.

• Startlingly, 80 percent had experienced physical, emotional or sexual violence, “levels of violence virtually unheard of in other populations,” Martin said.

• 83 percent had seen a medical provider within the last year, mostly regarding sexual health.

• 57 percent had received mental health services at some time in their lives.

An idea finds wings
During the course of her work, in the small-talk minutes before and after her surveys, Martin discovered a common need. Respondents wanted a safe place, a “place to sit down.”

“It got me thinking and as we analyzed the data we realized, wow, this population is not connecting with the systems of care yet [subjected to] great health and mental health risks. What if we created a place for people to sit and look at it as a point of connection?” Martin said.

By happenstance Alika and Ralph Galloway, co-pastors at Kwanzaa, learned of her research and saw the project as a new mission field.

Not quite knowing where to start, Martin and the Galloways hosted an open house in the church sanctuary at 2100 Emerson Ave. N. last month to see if anyone would come.

With missionary zeal the pastors welcomed the crowd, stained glass windows arching behind them, dark pews filled with people before them. Calling Kwanzaa a “church of liberation,” the Rev. Ralph Galloway said it is the church’s role to help “free [people] from the sex trade.”

Added the Rev. Alika Galloway: “Everybody has value; everybody needs a safe place. We are each other’s keepers,” From the pews came a few fervent “Amens!

And then Martin rose to speak, tears welling in her eyes at the prospect her idea was closer to fruition.

“People out there trading sex feel a profound lack of connection,” she said. “When they do access it they experience shame and judgment, not understanding.” Northside would do away with that, she said.

The critics
At the open house Gretchen Musicant, a city of Minneapolis health commissioner praised the project and Kwanzaa for its upfront support and not being afraid to tackle what to many is a thorny issue.

Lt. Nancy Dunlap, who works in the sex crimes unit of the Minneapolis Police Department, had some reservations. Groups working with sex workers come and go, she said, but the North Side could benefit from a service like this and Martin is “really determined to pull this together.”

There are issues as yet unresolved, such as security and drug use around or near the center, but these are issues the neighborhood has long been dealing with, Dunlap said.

She sees the drop-in center as being a “first step toward getting out of prostitution.”

“When you really, really think about it, it’s not a job women really want to do. It’s a last resort,” Dunlap said.

“I think that’s why the church is taking it on. They see it, they know it. It’s a problem a lot of people have closed their eyes to, where they look at women as criminals instead of victims,” Dunlap said, stressing how women are forced into prostitution to support themselves, their families or their drug habits, or because of pimps or gangs.

The center is also a way for police to connect with these women when they are victim of violent crimes such as rape, Dunlap said.

Out of the business
As for Miller Johnson, “out for nine years,” she now works as an HIV outreach coordinator for the University of Minnesota Physicians Broadway Family Medicine Clinic in the Kwanzaa neighborhood.

About her years in prostitution she says simply, “I survived hell.” She’s learned, she said, “I ain’t to be bought, sold or traded for nothing.”