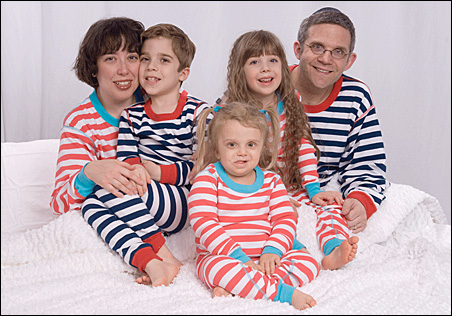 sweetdreamsforkids.org
Wendy and Mike Berezovsky with their children, left to right, Reuven, Chaya Dalya and Eliana.

Say your adorable baby daughter is born with a swollen upper lip. You think it’s delivery trauma and don’t worry.

But it doesn’t go away and you’re scared for her, very scared. Then, at five days old in May 2005, she has an MRI and you breathe a sigh of relief because the people in white coats determine it’s not cancer, that the tumor can be removed.

Only, at about 10 weeks old Chaya Dalya Berezovsky is having breathing problems and parents and experts alike begin to wonder about that lip and doctors order more tests. And it IS cancer, a highly malignant and rare Rhabdomyosarcoma.

And then baby Chaya Dalya has chemotherapy. But the cancer is tenacious, so at 7 months she has surgery and then more chemo and radiation. Yet by the time she’s about a year old there’s still tumor as well as a physician “saying pretty much ‘leave this poor girl alone. There is nothing else to be done,” recalls her mother.

Only parents Wendy and Mike Berezovsky of St. Louis Park did not give up.

“With tears rolling down my face,” recalled Wendy Berezovsky, Tuesday, “I said to the doctor, ‘No, you need to do something. We just want her here with us and we will do anything to make that happen.'” And so there’s a second surgery to remove residual tumor.

And now it’s March 2010 and Chaya Dalya — named Chaya because it is Hebrew for “life” — is nearly 5 years old and cancer free. “She’s a little miracle. She has this happiness and she is so full of life,” her mother said.

You might suppose the Berezovskys would want to bury their memories of those nightmare hospital days, and yet you’d be wrong.

“When Chaya Dalya was in the hospital in those quiet rooms you do a lot of thinking,” Wendy Berezovsky told me by phone with the musical sound of children’s voices in the background. “I knew I had to do something positive, something to help others.” 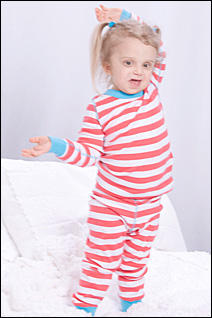 What the Berezovskys and their two older children, son Reuven, age 7, and daughter Eliana, 6, have done is give back. They started Sweet Dreams for Kids, a non-profit organization that since its inception a year ago has been the master force behind the collection and distribution of more than 2,000 pairs of new pajamas to children in hospitals in the Twin Cities and as far away as Des Moines, Dallas and San Diego.

An extra hug
Hospital-issued pajamas are a constant reminder that a child is sick, but giving a child a new pair of P.J.s in bright colors with fun characters or patterns is like giving a touch of home or an “extra hug” to a kid in a hospital bed, said Berezovsky, a full-time homemaker. Her husband is a financial analyst.

Today 400 pairs of colorful, new P.J.s are being dropped off at Minneapolis Children’s Hospital, thanks to Sweet Dreams for Kids and folks at Mount Calvary Lutheran Church in Excelsior, the biggest single donation the non-profit has yet had.

Hearing about Sweet Dreams, church, school and business groups as well as individuals from around here and around the country get in touch with her via wendy@sweetdreamsforkids.org and she facilitates the donations, making the connections between donors and hospitals. With monetary donations, she buys jammies sizes newborn to teen, two-piece ensembles only because they work best in the hospital setting. Donations may also be sent Sweet Dreams for Kids, 2624 Quentin Ave. S., St. Louis Park, MN 55416.

“We don’t gain anything from this except maybe I made one kid smile today. It makes us feel so good inside and that’s what we want to teach our kids, to turn around a terrible, terrible situation that we don’t know why it happens into something good,” Wendy Berezovsky said.