The numbers of Minnesota’s homeless are up, up, up.

Overall, the 2009 numbers have increased 22 percent since three years ago, the last official tally conducted by Wilder Research, and more than tripled since Wilder did its first statewide count in 1991.

The survey, relied on by legislators and state officials as the gold standard of homelessness counts, also reflects other disturbing trends: joblessness and increased hospital emergency visits.

“The results are troubling, but they are not surprising,” said Greg Owen, director of the study, in Wilder’s announcement today of the findings. “The tough economic landscape of the past few years, coupled with the recent shrinking of the safety net, has made life a lot tougher, especially for those already living on the margin.’’

Add to that the growing numbers of children with no permanent place to lay their heads. Compared with 2006, the number of homeless families with children increased 27 percent and the number of youth on their own — ages 17 to 21 — has increased 39 percent. 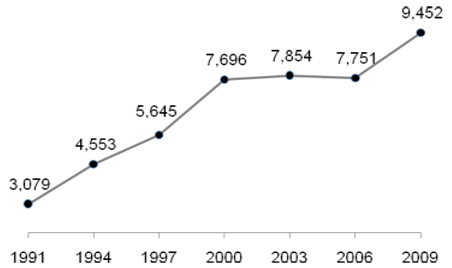 Owen noted that fewer homeless people were employed in 2009 than at any point since the survey began.

The 2009 survey showed 20 percent of homeless adults working either full or part time, down from about 28 percent in 2006. Average hours of employment per week also dropped to 26 from 30.

Also figuring in the survey were significant increases of adults reporting being affected by such factors as job loss and foreclosures.

Percentage of homeless adults who are employed 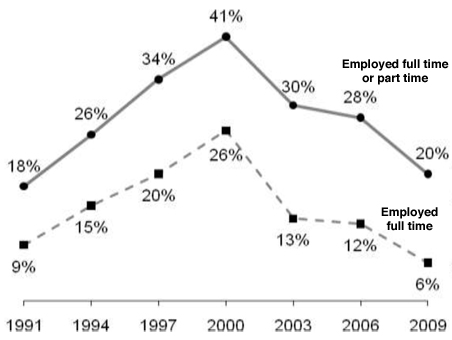 Another difference noted by Owen was the increase in recent hospital emergency use by respondents. Owen called it “kind of a remarkable jump,’’ with about three-quarters of respondents having some kind of medical insurance. In 2006, it was 14 percent; in 2009, 26 percent had visited a hospital emergency room in the last month.

You may remember that Gov. Tim Pawlenty in his 2004 State of the State address had the goal of ending long-term homeless in Minnesota by 2010, insisting it was a “very real and attainable” goal.

As Martiga Lohn of the Associated Press reported last November, the governor said in that January 2004 address: “Our homeless population in Minnesota isn’t so large that we can’t solve the problem in the near and intermediate term.’’

As the current numbers demonstrate, there’s little hope of that now, as the governor acknowledged last fall to reporter Lohn.

Said Pawlenty: “It’s unrealistic for even the most passionate advocates to think that everything could just stay the same when you have the worst economic crisis in the country in 40 years. So some adjustments had to be made.’’  Pawlenty had been praised by those working with the homeless for his early efforts to eradicate the problem.

Calling Wilder’s count one of the most valuable ways of measuring poverty in Minnesota, Sen. John Marty, DFL-Roseville, described the size of the homelessness problem “senseless’’ and an indication of “how poorly we’re doing as a society.’’

“I think the numbers show what a lot of us realize. The economy is really at the bottom and there are a lot of people hurting in this state and all around the country. Those folks are looking to government to try to help them out. Certainly, we have a moral responsibility to try to help the people that we can; others that are able-bodied and should be working need to be on the lookout for a job.’’  Where we can, “we do what we can with the limited number of resources to try and help our fellow citizens,’’ Koering said.

Marty, chairman of the Senate Health, Housing and Family Security Committee and former co-chair of a Legislative Commission to End Poverty in Minnesota by 2020, said: “How much money there is to address these problems we as a society have to decide. It’s a political decision. But when we decide we can’t address the problems. They don’t go away. They get worse. We’ve gone backward since the report was issued.’’

As for the danger of counting the same persons twice or more, there are safeguards, Owen said.

“We’re pretty confident we’re not duplicating the counts” because of certain “identifier” questions that allowed research staff to discard about 100 duplicate answers, he said.  For example, researchers asked: “How old were you when you first started to smoke? What number of cigarettes do you smoke per day?”

“People give fairly consistent answers to those questions,’’ Owen said, enabling researchers to identify the respondent as having been interviewed more than once. Further, some respondents will respond to the request to give a mother’s maiden name or the name of their first pet, to ID a survey, though others won’t answer such questions to preserve their anonymity.

Why not just ask: Have you been interviewed for the 2009 survey?

Well, says Owen, Wilder has been doing this statewide survey every three years since 1991 so it’s well known, including among the homeless and word spreads that completing a survey earns the respondent five dollars.

“Some, they don’t have a lot of money and five dollars is five dollars5. If it would get them another five dollars, people are willing to do another survey,” Owen said.

Besides talking with persons in typical places such as temporary housing and meal programs, interviewers also sought out homeless people in boxcars, under bridges or outdoor encampments, as spelled out in the federal government’s definitions.

Still, the homeless may be undercounted. The stats reflect numbers of homeless people counted or interviewed for this study. “The report does not include the estimates we will make in further reports,” Owen said, describing what he called the “first cut” of the data and analysis of the information collected by about 1,000 trained volunteers last fall.

Future reports will factor in what Owen called community-based surveys such as one coming out of southwestern Minnesota that suggests between 7 and 9 percent of families say another family is living with them because of economic hardship.

Here’s a sampling of other findings:

• 68 percent of homeless people lived in the metro area.

• African-Americans represent about 41 percent of homeless adults statewide, yet comprise about 4 percent of the adult population here.

• People of color make up 62 percent of the state’s homeless population.

• 55 percent of homeless adults have a serious mental illness.