That 22 percent increase in the number of Minnesota’s homeless counted by Wilder Research and reported last week is disturbing, haunting even. Consider: the spike occurred in only three years and likely will be adjusted upwards.

Thinking about that, I remembered a group I’d heard of but knew little about called A Minnesota Without Poverty.

Turns out that the group started in a church pew. Now it’s what director Nancy Maeker calls a “movement” making waves in the Legislature. It was also the impetus for the bipartisan Legislative Commission to End Poverty in Minnesota by 2020. [PDF]

Maeker, author with Peter Rogness of “Ending Poverty: A 2020 Vision,” is also a Lutheran pastor.

Here’s what she had to say.

MinnPost: I read somewhere that A Minnesota Without Poverty is an “interfaith community.” How did it come about and what is its goal?

Nancy Maeker: We dropped “interfaith” to make sure no one is excluded because of faith. We now say Minnesota Without Poverty is a statewide movement to end poverty by 2020. We don’t want to ignore the fact that it has its roots in the faith community, but we want to go beyond that.

MP: So how long has the organization been around? 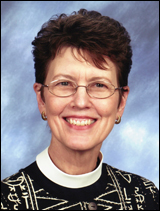 NM: It began in the Lutheran church, then expanded and became interfaith about 2004 with the signing of “A Common Foundation: Shared Principles for Work on Overcoming Poverty,” signed by 35 religious leaders in the state of Minnesota [including Lutheran, Catholic, other Protestant, Jewish, Muslim and Hindu faiths]. That was really the springboard to going statewide… Since that citizens throughout the state have been invited to sign…

MP: I see that document includes the belief “it is the Creator’s intent” that all people have adequate food and shelter, meaningful work, safe communities, health care and education and, that this furthers the common good. How many have signed so far?

NM: Maybe 8,500 because we also have signers on Facebook.

MP: In a way, isn’t that a disappointingly low number?

NM: In some ways. … [W]e believe our main work is to build the public will to end poverty because if we [do that] the public will affect public policy… We believe it is the key to ending poverty in Minnesota… that it is not an impossible ideal…

MP: Even with this debilitating recession that has affected so many economically?

NM: In some ways the recession has allowed people to see how easy it is to see someone on the edge fall into poverty… But yes, it does make it harder. In 2008, 491,000 Minnesotans were in poverty. We know there are more now…

MP: What is your connection to that legislative commission?

NM: We held an event called Focus on Poverty on St. Patrick’s Day 2006 …and had a panel of speakers from education, health care — former Sen. Dave Durenberger. Someone from housing, someone from poverty… We asked the same question of all of them. In your arena what would [need] to happen to end poverty by 2020? Then legislator, Senator John Hottinger [DFL-Mankato] saw the Common Foundation document and heard us asking that question…went back to the state Capitol and wrote the bill to create the commission.

NM: …[From] educator Ruby Payne, who has written about poverty and class cultures…and how to teach children that come out of generational poverty. [We] …told her we had this initiative by 2010. She said you can’t do it by 2010, maybe by 2020.

NM: We wrote “Ending Poverty.” I’m not going to say this book had great impact on any legislation or anything like that. It was geared to be a study book, a discussion book. It looks at poverty from a variety of angles. It looks at what are challenges of a community of concentrated poverty as well as challenges to somebody trying to hire from this community… individual poverty, …cultural differences, class differences especially related to work, and rural poverty.

MP: What about class differences and impact?

NM: People who have grown up in wealth or middle class have a different way of being than someone who has grown up in generational poverty where survival is the constant way you have to look at things and where crises happen over and over and over. …[where you’re] always having to make hard decisions, between food and health care, between rent and a car to get to work.

MP: What Legislative goals do you have this session and what hopes of reaching them?

NM: If we talk about legislative goals that came out of the legislative commission, there are three concrete bills in the process. The poverty impact statement, HF1818 and SF 1558, bill requires state commissioners to provide poverty impact statements on bills when requested by a legislator. For example, any legislator could ask, ‘What likelihood would this bill have on increasing or diminishing poverty?’ That bill is making its way through both House and Senate.

[Another bill,] which may not have as good a chance at getting passed this year is the Ladders Out of Poverty bill, HF 2062 and SF is 1770. That bill would establish a working group to develop concrete recommendations to helping Minnesotans build and protect assets.

…[F]rom what I understand the most important cannot be passed this year, but perhaps next. It has great hopes for reducing poverty 27 percent….I wrote a commentary in MinnPost…[on it]… [C]alled the Enhanced Earnings Package. The main point was to show how my family is living in middle class today because of government policies from 150 years ago. Now we have the possibility with public policy that could be enacted today that could be far-reaching as well.