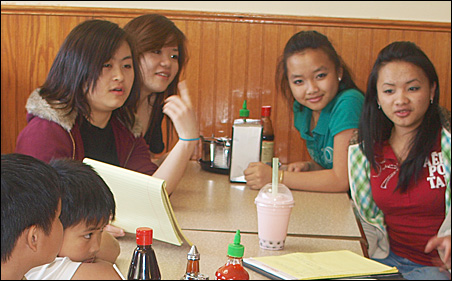 Ask teenage sisters Ka and Soua Xiong what they worry about and be surprised by their answer. They fear that while they’re away at school, their Hmong-speaking parents will become victims of crime and be unable to explain to Minneapolis police their need for help.

Over egg rolls and sodas at the Good Deal Restaurant in North Minneapolis the other day, nine Hmong-American children, ages 9 to 15, talked of their postcard and petition campaign to change practices in the Minneapolis Police Department.

Cultural and communications tensions between Hmong-Americans and Minneapolis police are not new — and they heated up again at a recent community meetng — but using children in the campaign for change may be.

The guy behind it is Jay Clark, their mentor and the outgoing and persistent project director for the Minnesota Center for Neighborhood Organizing at the Center for Urban and Regional Affairs at the University of Minnesota.

Neighborhood organizing, it turns out, is about helping groups find their voice, and it helps if that voice speaks English, which these children do.

Plus, there’s the cuteness factor. “We have now learned to use total adorableness as an organizing tool,” admitted Clark with a grin in explaining the enlistment of kids in this real-life civics lesson.

“My role is not to be an advocate for them. My role is to help them speak up for themselves,” said Clark, whose outreach into the Hmong communities in North Minneapolis has helped place dissatisfied Minneapolis Hmong students whose families came here from Thai refugee camps some years ago into Hopkins public schools.

Big and small problems
The kids told me stories of past problems, big and small, including Hmong residents at one Minneapolis four-plex being terrorized by teens who smoked pot in the yard and vandalized the building, eventually driving residents away. One child told about the theft of a tire from a relative’s car, taken while the driver was shopping, but the heist went unreported. Language barriers hampered a crime report.

About a year ago the Hmong community started asking city officials for more Hmong officers in general and more in North Minneapolis in particular, as well as a Hmong-speaker scheduled to work day hours. CURA last year released a study demonstrating the scarcity of Hmong officers in the North Side Fourth Precinct, which boasts the heaviest concentration of the city’s Hmong population. The report cited eight Hmong officers in the department.

Responding, police department spokesman Sgt. Jesse Garcia III had this to say: “In theory, it sounds pretty simple and straightforward: start allocating Hmong officers to the North Side.” But think of the precedent, he stressed. What happens if next week the East Indian community or the GLBT community wants their own officers? Instead, the department strives to train officers to be able to work with people of all backgrounds.

Further, Garcia said, seniority rules in police union contracts give officers the right to bid for work shifts and for areas of the city where they want to work.

So what happens when language barriers hamper communication? Police first call to request any on-duty officer to translate. If that fails, they can call a translation service. In the fourth precinct where about 7,000 Hmong people live, only two Hmong officers work.

Some Hmong claim it’s too often perpetrators on the scene who volunteer to do the translating.

The children’s efforts have increased since a community meeting April 10 they say widened the gulf between the police department and the Hmong community. About 30 young people and 50 adults attended the meeting along with City Council members Samuels and Barbara Johnson and a representative of the police department, a follow up to a meeting last September. .

30 sign complaint
According to Clark and the children, tempers flared. Yang, the Xiong sisters and Kha Xiong, 15, created a litany of complaints about the officer, Lt. Brett Lindback. They charged he came to talk, not listen to their concerns. All 30 children who attended the meeting signed the complaint.

The children told me they felt the officer was disrespectful of them and their culture because he was angry and didn’t look them in the eyes when he spoke, that he talked of Hmong gangs rather than about helping law-abiding individuals.

“He thought we were saying police are bad, and started to argue with us. But we want more Hong police to help,” the petition says.

A recent CURA study revealed eight Hmong officers in the Minneapolis P.D. (though the department identifies 30 Asian officers) as well as a lack of trust and cultural differences. Consequently, many Hmong do not report crimes.

I left a voice-mail message for Lindback to get his response, but so far he hasn’t gotten back to me. But Garcia, who characterized Lindback as working with the Asian community for many years, said of Lindback: “He was there. Him being there show’s he’s engaged in listening.”

At the meeting was Minneapolis attorney Blong Yang to refute an earlier police department claim that a five-year-seniority rule prevented transferring a Hmong police officer to the day shift. After reading the contract, he said a police officer could be switched to a day shift after 12 months of night work.

As for Ka and Soua, if you think their fears are far-fetched, think again.

Three years ago two armed men in black ski masks robbed Ka and Soua’s parents in the driveway of their home as they were unloading groceries from their car.

Since neither adult spoke English they couldn’t talk directly to police to describe the crime so they scrambled to find a translator. “We were lucky. My sister’s boyfriend translated,” said Ka Xiong, now15, who lives with her family in North Minneapolis.