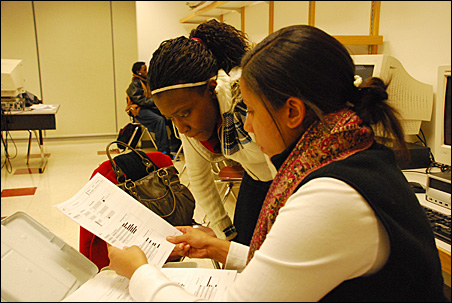 Courtesy of Admission Possible
Jae Jae Brooks, right, achieved her goal of graduating from Carleton College. She now helps other students with their school work, including Roosevelt junior Ruth Ifonlaja.

Jae Jae Brooks’ life is a Hallmark movie in the making.

It’s that feel-good-kind-of story your mother emails you to brighten your day, the one you share with a child to show dreams really DO come true, that this IS the land of opportunity, really, including for African-Americans.

Yet it’s a story streaked with sharp-edged reality.

For starters, like most every other 2009 college graduates, Jae Jae, aka Jessica, is looking for a better-paying job. (You weren’t expecting a fairy tale, were you?) Plus, in her search for a better life, Brooks was forced to separate from her family.

“I think my mom was pretty afraid to send me off, but was more excited that I was going to be doing something that would let me get ahead and succeed. I was scared, but I left,” said Brooks, now 23 and a graduate of Carleton College, one of the nation’s highest academically ranked colleges.

Along the way, she’s been an inspiration.

Go back a few years to when at age 14 she moved across country by herself to Eden Prairie, away from her widowed mother and sister struggling to make ends meet in Canton, Ohio.

Mom, whom Jessica describes as a “member of the working poor,” was nearing the end of her work days toiling double shifts for 22 years as a nursing assistant in Ohio’s nursing homes. Her mother had developed a serious spinal condition and “really bad arthritis,” Brooks says, so the family’s economic prospects were poor.

But Jae Jae’s academic prospects were golden. Her rainbow was A Better Chance (ABC), a national program with branches in Eden Prairie, Edina and Rochester, Minn., that plucks academically talented, economically disadvantaged kids out of adversity and puts them into situations of opportunity. Later, she signed on to Admission Possible, a nonprofit helping 1,400 Minnesota students at 19 high schools prepare for college.

A structured new life
Under the ABC umbrella, Brooks moved into a “very nice” house of 14 economically disadvantaged girls from all over the country to attend Eden Prairie High School, share a bedroom and a dream.

“It was very structured, with mandatory study hours every night for two hours,” she said. “I didn’t have anything like that at home. My mom was never home when I was growing up; she was always working.”

It was her family’s struggles, she said, that inspired her to do better. Arriving in the Twin Cities an “A” and “B” student, she focused even more, maintaining a 3.8 GPA throughout her high school years.

As a sophomore, she was accepted by Admission Possible, a program to ready low-income high school juniors and seniors for college. (They’re recruiting qualifying sophomores now with a 2.0 or higher GPA for next year; deadline is April 12. Details are here.)

Like other Admission Possible students, Brooks had good grades and the desire to go to college. Plus, she agreed to two after-school sessions a week during her junior and senior years of high school for free ACT/SAT test prep. She got help preparing college applications and obtaining financial aid, too. 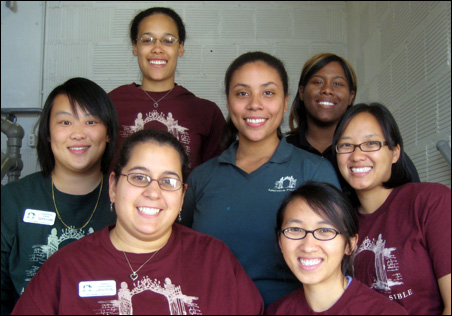 As a senior, she became a poster child for the organization, touting its virtues. She’d tell her story and how she’d set her heart on getting in to exclusive Carleton College in Northfield, urging Carleton alums in her audiences to put in a good word for her at the school.

Then, in December of her senior year, she learned Carleton had accepted her.

As a college sophomore she realized chemistry wasn’t her field; she changed her major to history, and graduating last spring.

Tough job market
By then, the Great Recession was churning up the economy and three years of summer internships with Target and Cargill helped little as the bottom fell out of the job market.

At a job fair she ran across Admission Possible recruiters and decided to do for others what they’d done for her, signing up as an AmeriCorps member to work for Admission Possible, earning only a living allowance. “It’s not very much, but it’s enough to get by,” she said.

Admission Possible collaborates with Kaplan, a college testing preparation and admissions program, to train staff on how to prepare students for college. So far, 98 percent of participating students have earned college admission, with 93 percent going on to enroll. (Students are often stymied, said Emily Jacobs, spokeswoman for Admission Possible, by the cost of college or family concerns or responsibilities.)

After a year on the job at Roosevelt High School in Minneapolis as a junior coach and a role model, Brooks says, “I absolutely adore my students. They want to be in it; they want to go on to college.”

But she’s ready to get on with a career in business. She has an internship with Traveler’s Insurance this summer that she’s hoping will turn into a full-time, paid position.