Set aside the funeral garb. The tax-return check off to benefit the homeless and hungry has been resuscitated and restored to the Senate’s omnibus tax bill, which is headed to the Senate floor.

On the House side, a similar bill authored by Rep. John Lesch, DFL-St. Paul, is scheduled for a hearing Monday in committee.

Though left off the omnibus tax bill presented to the Senate Taxes committee Tuesday, the provision was offered as an amendment today by Sen. Julianne Ortman, R-Chanhassen, and passed in a bipartisan vote.

“It’s a much needed provision,” Ortman said, citing 2.2 million visits to state food shelves in 2008, a poor economy, high unemployment, and the high cost of prescription drugs for senior citizens. Yet she stressed the importance of it being a voluntary donation rather than a tax obligation. The provision has a sunset clause, meaning it will appear on tax forms for 2011, 2012 and 2013. 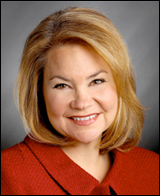 The provision would allow taxpayers to donate to food shelves and homeless-prevention programs on their income tax returns, much as some taxpayers do by checking a box to donate to funding non-game wildlife.

Supporting the checkoff proposal is Liz Kuoppala, executive director of the Minnesota Coalition for the Homeless, an umbrella agency for 150 organizations around the state.

As you’ll recall from our recent story, the checkoff proposal was the idea of St. Paul Johnson High School counselor Dan Kennedy, and he and junior Arthur Nguyen and others from Johnson have been lobbying for its passage. 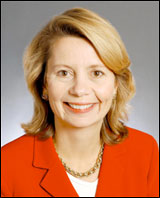 Sen. Ellen Anderson, DFL-St. Paul, who authored the bill but is not on the taxes committee, said she had been “working committee members pretty hard on this” behind the scenes for the proposal’s inclusion in the omnibus tax bill. She sees the effort as an invitation to taxpayers at large to donate to the emergency programs and says it will not endanger existing state funding for such programs.

If passed into law, the tax-form check off [PDF] is expected to generate about $300,000 to go to the Department of Human Services to be divided between food shelves and programs to prevent homelessness with “no corresponding reduction in budget” for these groups, Ortman said. The donations would also pay for the program’s administrative costs.

Ortman says the check off would serve as a reminder to individual and corporate tax payers that they can contribute to those in need.