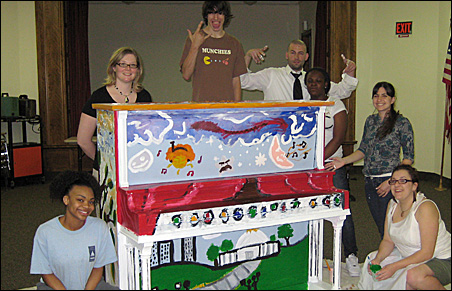 Photo by Matthew Wash
Newell Hill (back right), founder of Keys 4/4 Kids, gathers with a group at St. Paul’s Hamline Library, which received this piano from the group.

Next time the neighbor kid invites his rock band to jam in the garage and amps up the sound so it shakes the rafters and drives you indoors on a pleasant summer’s eve, remember the story of Maria Rios.

When her son Gabriel was young, Rios turned to classical music to lull him to sleep. As he grew, this self-proclaimed tone-deaf single mother from St. Paul paid $25 for a piano from one of her Como Park neighbors to provide the boy an instrument of his own, rolling it down the city street to their home.

“It was a big old piano, but it made noise,” she laughs now, eager to tell her tale and give thanks where it’s due, to The MusicLink Foundation.

So there’s more. Through the years this divorced mother of one took in eight more children, (some now grown up or moved on) all “semi-related” and most arriving luggaged-up with challenges ranging from fetal alcohol syndrome to attention deficit/ hyperactivity disorder, she said.

“None of the kids came with money,” she told me, thus stretching her Metro Transit bus driver’s salary thin. Still, Rios, now 55, wanted music for everyone. “I saw how it helped Gabriel, the discipline of practicing every day for a few minutes, the discipline to get the right sound.”

She saw how the other children who were dropped on her door step and plagued with short attentions spans were attracted to the music. “I was desperately looking for something, something to give them structure and I saw when Gabriel was practicing, they would watch.” And listen.

A music teacher’s dream
Complicated story made simpler: Along the way, Rios met Sue Wege, state coordinator and regional director of The MusicLink Foundation, a national, nonprofit group started by a music teacher who dared to dream about recruiting music teachers to teach needy kids for free or a lesser fee.

Rios’ kids receive discounted music lessons from a MusicLink teacher. The group gave the family a newer, better-quality piano and a cello for Gabriel.

With 85 MusicLink teachers and 230 students taking lessons for a variety of musical instruments, Minnesota has the largest program, stretching from Crookston to the inner cities of St. Paul and Minneapolis. Students qualify for the program if they qualify for free or reduced-fee school lunch, or nearly so, Wege said.

Why is music important?

“I could go on a long time about that. It adds so much to a child’s life, just their self-esteem. It’s related to math skills, organizational skills, focusing. Music is a magical thing,” said Wege, of Cottage Grove, who has a master’s degree in music and has been teaching piano for more than 30 years.

For some, it’s salvation. Wege had one parent tell her: “Now, instead of my kids being out in the streets, they’re in my living room making music.”

One impoverished single mom in Minneapolis who sold her car to help fund her talented son’s musical education, now has three children receiving instruments and lessons through the program.

The foundation is broader. “It’s like a partnership of many different people all coming together to make this happen,” including the Minnesota Music Teachers Association, Wege said.

Collaborating with MusicLink is Newell Hill and his Keys 4/4 Kids, a nonprofit based in St. Paul but started in his parents’ garage about 10 years ago. This private school graduate first became interested in bringing music, dance and the visual arts to low-income kids in North Minneapolis through MUSE, but the program is in hiatus since 2005 when the funding ran out. 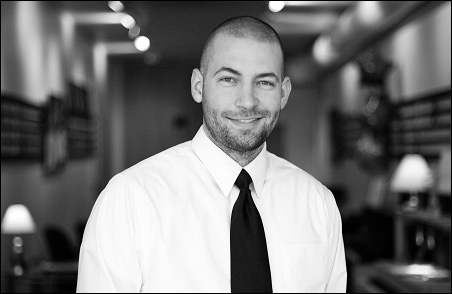 Photo by Matthew Wash
Newell Hill credits the inspiration of one of his former teachers for starting the Keys 4/4 Kids program.

Hoping to grow the program and its curriculum nationwide — so far branching out to Chicago — Hill credits the startup to his Mounds Park Academy history teacher Maureen Conway for inspiring him “to give back to the community and to make a difference for kids less fortunate than myself.”

Meanwhile, Hill, 29, who grew up playing in the Minnesota Youth Symphonies, has a business moving and repairing pianos to build up money for MUSE. He also accepts donations of pianos, some of which he gives away to individuals or schools or community centers in need.

Immeasurable impact
“It’s hard to measure the impact you have on kids. You can just see it on their faces. I have pictures in my office,” Hill said.

As for Rios and her kids? “I’ve basically used music for helping the kids settle down and get into some kind of routines,” she said.

She credits Sarah Kang, piano teacher for three of her foster kids, for taking the trio on. “She reads their personalities and finds the right kinds of things for them to learn.”

Kang said she sees herself giving the children an introduction to piano and music, but it’s up to them to practice and learn.

As for Gabriel Trejo, Mario Rios’ son, he’s 20 now and just finished with his first year of technical school to become a diesel mechanic, playing cello from seventh grade through high school, but he’s returned the instrument to MusicLink.

He praises his training for fostering his appreciation and understanding of music. “I love music. I’m just not too good at playing it,” he said, laughing.