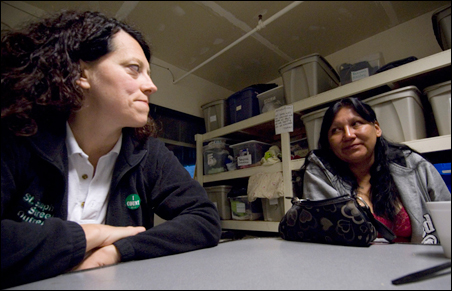 Andrea Goose came to Kola, an outreach center at Anishinabe Wakiagun — the People’s Home — for a hot shower and a cup of tea. It was welcome warmth after a night sleeping outdoors.

Yes, the 45-year-old Goose revealed with quiet dignity, she’d spent the night outside on the grounds of the nearby Minneapolis American Indian Center wrapped in two blankets. With temperatures hovering in the 40s, it had been a long night.

And with that admission, she became a number, one of more than 311 homeless and unsheltered adults, children and youths counted recently in Hennepin County, though mainly around Minneapolis, and at the instigation of St. Stephen’s Human Services, a nonprofit organization aiming to end homelessness.

But don’t think for a minute it costs less for people to sleep outside than to shelter or house them, says Monica Nilsson, director of street outreach at St. Stephen’s. That’s just not the case, she told me.

Minneapolis, in the mid 1990s, did a study, she said, showing the average real cost per year to society for a homeless and unsheltered person is $25,000. You’ve got to factor in, she said, the other places they stay: detoxification centers at $192 a night, jail at $363 a night, a shelter at $33 a night and the occasional overnight hospital stay at $2,800.

Contrast that, Nilsson said, to a home like Anishinabe Wakiagun, 1600 E. 19th St. in Minneapolis, a program for Native Americans.

“This is permanent housing for people living with chemical dependency. The cost is $12,000 a year. It’s cheaper than homelessness and [residents] use Social Security or disability. Residents pay half the cost of living here,” Nilsson said.

She opens up to me because she is with Nilsson, a woman who spends her days offering help to the cadre of people who sleep in cars and parks, near railroad tracks and under bridges.

Goose sleeps in the company of her uncle and 22-year-old nephew, she says. “I feel safe with them.” There’s a pause. “My niece almost got raped the other night.”

“She had a knife. She stabbed him.”

If she wants support to file a police report, we can help, Nilsson tells her, to get the assailant off the streets, to help protect others.

For awhile I listened while Nilsson talked, glancing around the large basement room, the AA “God grant me the wisdom” prayer scrawled in magic marker hanging on one wall, radio music playing in the background. Around me people were quiet in a comfortable sort of way, like fond family members. All appeared to be Native Americans.

At the table next to me a man in his 20s was plugged into an iPod, listening to a sermon, he said, while eating popcorn. Across the way, fresh out of the shower, another Indian man combed his wet, waist-length hair.

These people are comfortable here. All are homeless, come to make a piece of peanut butter toast, to pour a bowl of cereal, to wash their clothes or talk to the physician on staff.

“I look out for the people in the camps and on the streets,” said Dr. Ken McMillan, Kola Outreach doctor under the American Indian Community Development Corporation. McMillan tries to keep them well, to diagnose their medical or mental health problems, prescribe medications and encourage them to stay on them, to keep them out of hospital emergency rooms.

All the while he and Nilsson and others try to work their magic. They try to entice the outdoors people inside.

“Some people may choose outside over overcrowded conditions,” for instance in emergency shelters, Nilsson said. “But never in 15 years have I met someone who has not chosen an apartment over being outside, given the choice.”

Nilsson and Goose talk, Nilsson telling her that with her $200 or $300 a month in General Assistance and the help of housing support programs through St. Stephen’s she could afford an apartment. “If I said I had an apartment for you for $70, would you want it?”

“Yeah,” Goose responds, her face lighting up. She says she used to work and live on the Leech Lake reservation as a personal care attendant but the job didn’t work out and there’s little housing there.

Dropped out
She made it to eleventh grade, but dropped out of school when she became pregnant. She has three children, one living in Minneapolis with a boyfriend and the others living out of state. On the coldest nights, she can sleep with her daughter.

Does she drink alcohol? “I drink, but not every day.”

When the doors close at 11 a.m. for the day at Kola, she’ll head to another location for lunch, and that night to a church for her supper. Weekends she uses her food stamps for bread and bologna.

“You know, you can have your own place, you can afford it, with help. I can help you with that,” Nilsson said, handing her a card listing the location of St. Stephen Human Services offices. “Come to that address.” You can apply for Women’s Housing Partnership, she said, stressing how easy it is to apply. “But the wait is four to six months. Right now is a good time to get on the list, to get a place before winter.”

“But your situation is fixable. Mental health is treatable,” Nilsson said.