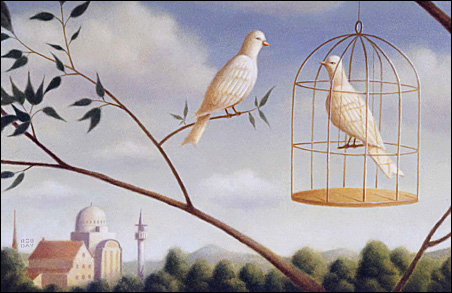 When 6-year-old Amy’s dad went to jail, the bottom fell out of her world. A normally sunny child, she became extremely anxious.

She went to school crying every day, says her mother, Jolene Howard of Brainerd, and wouldn’t go to church or soccer, activities she’d enjoyed before. “She wanted to stay by me,” Howard said.

When Howard’s partner of 10 years, Amy’s dad, was jailed for criminal sexual conduct at the Minnesota Correctional Facility at Faribault, Howard was left to pick up the pieces of her family’s life and to parent alone.

That’s why Howard, with the support of the Initiative Foundation, is helping others found Inside-Out Connections, a Central Minnesota project based in Little Falls designed to help communities understand and address the needs of children with a parent in jail or prison.

”There is so little being done to support them, particularly in Greater Minnesota. Families have access to more support and services in the Twin Cities Metro area, but in rural communities, children go on suffering,” explained Linda Kaufmann, senior program manager for children, youth and families for the Initiative Foundation.

“They’re usually facing some pretty significant economic issues, having trouble in school. If they’re very young, they’re not developing the necessary attachments with their caregivers. So there are all kinds of risk scenarios for children who have a parent in prison,” she said.

Yet that connection is important. “Most incarcerated parents should maintain some kind of relationship” because, Kaufmann said, “we know children do better when they maintain some relationship with their parents.”

That parental tie is important, supporters say, because “Decades of attachment research underscore the obvious, particularly for very young children: kids need parents, do better in their presence, and suffer when the relationship with the parent is severed or breached.  Children whose parents have broken the law are no exception.”

Within the last several months, teams — made up of 25 to 35 community and faith leaders, parents, corrections staff, educators and other “key stake holders around the issue” — have been formed, explained Kaufmann.

The goals are these, according to Kaufmann and the website:

• To determine the needs of these children — who in Minnesota, she said, number an estimated 1 in 10.

• To foster and enable action plans around needs such as parent education, family support, child mentoring and community engagement.

• To educate the community — including child care providers, teachers, neighbors and everyone else — that these children need support.

To that end, the Initiative Foundation this week is sending out its Initiative Quarterly magazine dedicated to the issue of children whose parents are in prison or jail. It will be found online at www.ifound.org later this week.

Programs in the works, under way or being planned include parenting education classes, support groups and information and referral services. There also will be public forums educating about these children’s needs. Funding has been attained for some of the programs.

Children like Amy are victims of a parent’s crimes, Howard said, which is why it is so important to alert the community to their plight. For instance, the schools need to know how they can support these children, a topic to be addressed in back-to-school workshops in some Central Minnesota school districts this fall.

The outside parent or caregiver also needs a contact within the justice system to understand the process.  Her daughter wanted to know what was happening to her father, so Howard would go to officials who would ask, ‘Why are you supporting him?’ I’d say I’m not. I need to know this for my daughter.”

The outside person also needs a navigator, Howard said, to help deal with daily life issues. Howard went searching for mortgage help because she and Amy’s father held a home mortgage jointly but subsequently lost the home.

Howard, who works at the Initiative Foundation in administrative support, said she joined the effort because she knows firsthand the needs of families like hers and wants the initiative to stay “child-focused.”

Living and working in Little Falls at the time, Howard sought counseling for her family, which includes two teenage daughters from a former marriage. Life is getting better. Her older daughter recently graduated from high school with honors, and her middle daughter is doing OK, too.

As for Amy, now 10, life is easier now. Though she had supervised visits with Dad while he was out on bail, she now gets a phone call from him about once a month, and an occasional card or letter and that seems enough, her mother said.

Sometimes Amy will talk even in public about “when my dad gets out,” Howard said. But she hasn’t asked to see him when he’s released in about a month.

As for Howard, she plans to go on with her life without the man.