In her hauntingly beautiful memoir, Kao Kalia Yang talks of the coming of the first Hmong families to Minnesota in the winter of 1976 and their fear of the stark, dead landscape.

From her book “The Latehomecomer”:

“… [T]he first Hmong man to come to Minnesota talked of how they’d seen the trees without leaves in the depths of a cold winter. The American woman who welcomed them had explained the changing seasons, how trees without leaves will get all dressed up again in the warmth of summer. The group hadn’t believed her. They thought it was the chemical rains: the government killing the people all at one time, all over again.”

Isn’t that reaction telling? Doesn’t it suggest the life experiences that came before, and doesn’t it illustrate how different these immigrants are from those of us born in Minnesota?

And isn’t that reason for The Advocates for Human Rights, Minneapolis non-profit reaching out to promote and protect human rights in Minnesota and far beyond these borders, to include “The Latehomecomer” in its pilot book club? For what, after all, leads to empathy and understanding but the telling of life stories? 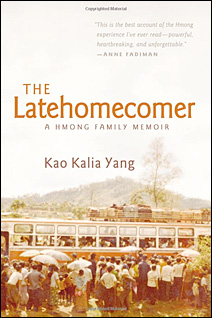 “It’s important for us in Minnesota to understand the refugee experience,” said Robin Phillips, executive director of the Advocates, because 25 percent to 50 percent of immigrants coming to Minnesota come here as refugees, compared to the national average of 8 percent.

Phillips sees the club’s book discussions as elucidating. “It’s a way for us to do outreach, to talk about human rights about how cultural things like books address human rights issues. [The books] are something more accessible to a lot of people.”

Immigration population grows
Since 1990, immigration to Minnesota has grown steadily, with 2008 statistics showing about 7 percent of Minnesota residents were born outside of the United States.

Born in Thailand’s Ban Vinai Refugee Camp, Yang immigrated to St. Paul with her family as a 6-year-old.

As she grew, she gained insight into who she was, writing in this passage:

“From the day that she was born, she was taught that she was Hmong by the adults around her. As a baby learning to talk, her mother and father often asked, ‘What are you?’ and the right answer was always, ‘I am Hmong.’ It wasn’t a name or a gender, it was a people.”

Phillips, who read the book cover to cover on a return flight from Morocco where she’d been helping train human rights workers to document human rights violations against women, says, “I think [Yang] is able to really convey the feeling of being a child having to adjust to a new country and culture and the dislocation of being in a refugee camp.”

In a “compelling way,” she tells her family’s experience, including coming to St. Paul, Phillips said. Yang writes of conflicts between traditional ways and adjusting to the mores of a new country, as well as addressing some generational issues, Phillips said about the book I’ve just begun reading.

Yang went on to graduate from Carleton College in Northfield, Minn., and received a master’s of fine arts degree in creative nonfiction writing from Columbia University in New York City.

Focused on great books with human rights themes, readers meet every other month with their brown bag lunches over the noon hour to talk about their readings, using guides prepared by The Advocates.

Upcoming books to be discussed include: “Brief Wondrous Life of Oscar Wao” by Junot Diaz on Aug. 27; “The House at Sugar Beach” by Helene Cooper Oct. 29; “Stones into Schools” by Greg Mortenson on Dec. 17.

The first two book discussions (“Reading Lolita in Tehran” by Azar Nafisi, and “The Daughter of L’Arsenal,” by Jacqueline Regis) each drew about 30 people from a wide range of backgrounds.

For details on the books, check here.