Since babies are our future, we better pay a lot more attention to them, two convincing speakers argued Thursday.

Start by looking at Minnesota’s demographics, specifically the rising numbers and growing diversity of its babies, suggested research scientist Richard Chase, co-author of “Babies in Minnesota: The well-being and vulnerabilities of our youngest children,” a recent report issued by Wilder Research.

Then, study the high poverty levels of many of those babies’ families.

“The barriers to achievement arrive early,” said Gunnar, stressing the importance of healthy brain development, particularly between birth and 3 years old, leading to a healthy, educated adult. A child born into a very poor family, however, is exposed to life stressors, not the least of which is emotionally strained caregivers failing to provide a supportive and nurturing environment.

“Significant adversity impairs brain development,” she told about 100 attendees at the fouth Annual Nancy Latimer Convening for Children and Youth” at Wilder in St. Paul.

Calling poverty “a childhood disease” with life-long repercussions and costs for both children and society, Chase asked: “How many little brains in Minnesota have already suffered lost opportunities” because of the biological damage resulting from poverty?

Between 2000 and 2007, according to his written report, the birth rate in Minnesota increased 9 percent to about 74,000, explained by a 50 percent increase in births to non-white mothers. (Some of the numbers have been updated to 2008 and are found in this story but not in the report.)

Add in children to age 4 and raise income level to include up to 185 percent of the poverty threshold, and that’s 30 percent or 82,900 children in poverty. 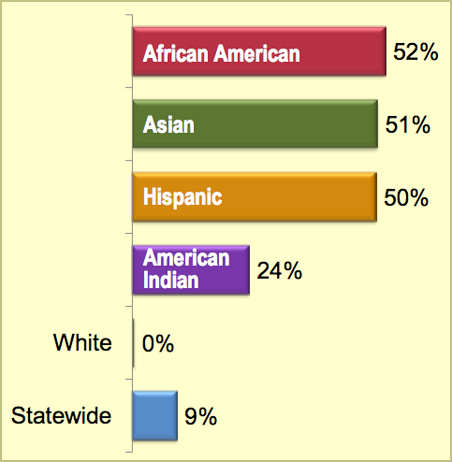 From birth the brain develops on cognitive, emotional and social levels, Gunnar said. In the best of worlds, baby learns skills preparing her or him for reading, writing and language, she said.

But born into a very poor family, a child as well as the caregiver is impacted by economic stressors. Parents worried about their child’s next meal may not have the energy to encourage a child’s learning and curiosity.

‘Serve and return’
Ever heard of something called “serve and return,” not as it applies to tennis, but rather to very young babies? Both Gunnar and Chase talked about it.

Say baby smiles and gurgles at Mom or Dad, then waits, big eyes staring, for a response, a smile or encouraging word in return.

What if it doesn’t come? After awhile, a baby closes down to trying new things, slowing brain development.

Consequently, children are not being exposed to language-rich, positive environments. “They’re starting off at a huge disadvantage,” Chase said at the conference presented by the Minnesota Early Childhood Funders Network and co-sponsored by the Minnesota Council on Foundations.

There’s also “the other hidden issue” among low-income families says Chase: 15 to 20 percent of their caregivers have some sort of depression. “How can that mom develop positive interaction so babies can develop?”

“There’s this unbreakable link between poverty, health and education, ” Chase said. “We have to stop focusing just on little kids. We have to empower families and communities.”

Investing in early childhood programs gives the “biggest bang for the buck,” and they are a better investment than department stores, stadiums or airlines, Chase said.

The Minnesota Early Childhood Funders Network presented “Nancy” awards, honoring the spirit and legacy of the late Nancy Latimer for her leadership and commitment to children, to:

Jane Kretzmann, senior program officer at the Minnesota Community Foundation for her work promoting the healthy development of young children, including development of the Project for Babies;

Arthur J. Rolnick, economist, senior vice president and director of research at the Federal Reserve Bank of Minneapolis for showing the link between early childhood education and healthy communities and economies.