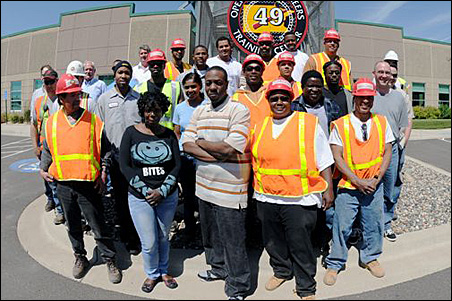 A local labor union and a Minneapolis vocational school with the slogan “the best social-service program in the world is a living-wage job” are collaborating in what they call a ground-breaking effort to put more minorities and women at the controls of the heavy machinery that builds the state’s roads.

Why such a program in poor economic times?

Because, as American society becomes more diverse, employing increasing numbers of women and persons of color on the job is required for those multi-million-dollar highway construction contracts funded by federal and state governments, union folks say.

“We did this for our contractors because our contractors have to have minorities on the job,” said Gary Lindblad, director of training at Local 49’s Training Center in Hinckley. With more diverse work forces, “they get contracts that will also provide jobs for [all] our union members.”

Yes, there are white men “sitting right now because there is no work,” acknowledged Lindblad. Still, baby-boomers are retiring — even if it is only because a pension pays more than too-little work — so job openings are occurring and the “pool of minorities is not deep enough,” Lindblad said.

Doors open to women and minorities
According to 2009 state Department of Transportation statistics on the number of workers on federal-aid highway construction, about 4 percent of 538 heavy equipment operators were women or minorities.

“Our doors have always been open wide to women and minority community members, but we wanted to go the extra mile to ensure more people knew how to enter Local 49’s apprenticeship program,” explained Glen Johnson, Local 49‘s business manager.

“While many people talk about inclusion and a diverse workplace, we have gone beyond talking,” continued Johnson, “and are taking real action to address this issue in a responsible manner that will benefit the union, the contractors and members of the community.”

The issue they’re addressing, of course, is the 4.3 percent of women and minorities employed on highway construction jobs last July as equipment operators, according to MNDOT. The goal is 11 percent.

Yet Macalester College professor Peter Rachleff, who specializes in American labor and immigration history, begs to differ a bit with Johnson’s claim of open doors.

“It’s a good thing,” he said about the move toward a more diverse union membership. “I don’t want to criticize the 49ers because they’re actually doing something. But it is 40 years too late. “

Historically, Rachleff said, the industrial unions, auto workers and steel workers have been more receptive to immigrants and workers of color than those in the construction sector. “Construction trades in particular have been resistant to diversify. Some have been better than others.” 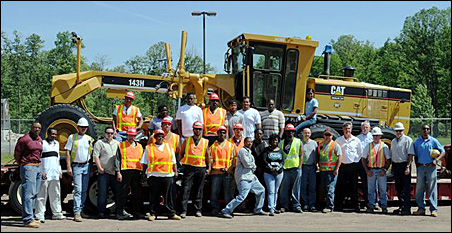 Courtesy of the International Union of Operating Engineers Local 49
These students took part in a 20-week program that uses on-the-job training and classroom instruction.

On the other hand, he said it’s not as simple as saying they are anti-immigrant or racist, because people in the construction trades often sought to find jobs in their trades for sons, nephews, cousins.

Yet Louis King, CEO of Summit Academy, calls the collaboration historical for Minnesota and credits Johnson and Jason George of the union for getting the joint effort going.

“They’re good people,” King said. “They saw it as good business. They saw an opportunity and took it. They’re not mandated to do it. It’s a good thing for the minorities and women and the industry in total.” Now labor, contractors and a community-based organization are working together, King said.

The partnership removes “one of the barriers” to diversifying the trades and enabling adults from economically depressed neighborhoods to train and qualify for union wage jobs, King said.

Standards are the same for these students as others. To become a registered apprentice, as mandated by the state, students need a high school diploma or GED and a passing score on the Ramsay Skills Test, which evaluates basic math proficiency.

Most of the students had 90 percent or better on the test, King said.

Widespread layoffs
For Shysen Turner, 35, an African-American reared in south Minneapolis and a Roosevelt High School graduate, the program is a step closer to becoming a crane operator.

With some college under his belt, Turner worked as supervisor, trainer and debt collector for the Verizon telephone company but lost that job in widespread layoffs. He also owns two music studios and has holdings in a video production studio. But, “that’s not what brings home the bacon,” Turner said.

A job as a crane operator could bring $50 to $70 a hour, once he completes 4,000 hours as an apprentice and further training. Liking math, the trigonometry required for the job doesn’t faze him.

Also hopeful about her job future is Mari Simmons, 35, of Minneapolis, who characterized herself as another casualty of the recession-caused layoff. With her high school degree, she’d been working in the mortgage and banking industry before being laid off.

Though she started in the carpentry program at Summit, she jumped at the opportunity to work outside with grades and soil.

“I like gardening. I saw this as a different perspective of gardening,” Simmons said, though also attracted to the idea of making $14 to $17.50 an hour to start.

Turner, too, is confident about his job prospects now that he’s started his training. “There [are] really good chances for well-trained minority operators. They’re not going to hire you just for the color of your skin.”

Will the African-American encounter racism?

“They warned me about that. I’m prepared. I’m a former bill collector,” Turner said. If he hears somebody play the “black card” or the “ethnic card,” Turner said, “I know what to say.”

To learn more about unions and diversity, check out this YouTube speech made to steel workers in fall 2008 by Richard Trumka, now president of the AFL-CIO, in campaigning for Barack Obama. He claims industrial unions were the first to stand up against segregation and lynchings.

Or, Rachleff suggests reading “Equity is Not Enough” by Nancy Maclean, a study of equal opportunity and affirmative action in the work place.