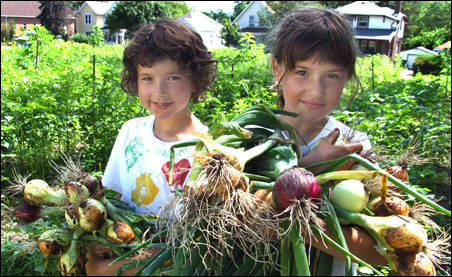 It’s not unusual to see children splashing in lakes and pools this time of year, but on St. Paul’s West Side, they’re also romping through gardens yanking out weeds and harvesting onions and basil.

They call it fun.

In the big picture of life, summer in a garden can change a child and vegetable seeds can influence a community, at least according to the folks at the Youth Farm & Market Project, now blooming at nine garden sites around Minneapolis and St. Paul.

“I think kids want a reason to be outside and they want to do good things in the world,” says Gunnar Liden, head honcho of the project that encourages good growing, good eating, community and lots of outdoor fun and games.

Couple those goals with the recession and a national concern about childhood obesity and you’ll understand why this program is flourishing.

It was the mid-1990s when the Youth Farm & Market Project started with 10 youngsters working in a Lyndale neighborhood garden in Minneapolis. These young organic farmers tilled, sowed and planted, cared for, harvested and then sold the produce they grew. The idea was to create a healthy urban environment where youth would flourish right along with their tomatoes, cucumbers and zucchini.

Now, the non-profit organization serves about 500 kids in summer and school year programs in Lyndale and Powderhorn neighborhoods in Minneapolis and on St. Paul’s West Side. The summer programs are free to kids who live in the neighborhoods the gardens serve. Those plots crop up in poorer areas of town, thanks to neighborhood organizations, churches, public agencies, schools and others in the community.

Selling organic produce
On about two acres of land, kids raise some 11,000 pounds of healthy, organic produce to share with their families weekly and to sell to their communities. In St. Paul, for instance, they grow and sell wholesale zucchini blossoms, hot peppers and other produce for El Burrito Mercado, a local restaurant and market.

Off season, some children continue honing their green thumbs though plant and science classes in the greenhouse at Cherokee Heights Elementary School in St. Paul, where they will, of course, seed plants for next year’s gardens, thus continuing the growing cycle.

Some of those locally grown salad greens, cilantro and onions end up in school lunch; other produce ends up on their home dinner table. Camp days, middle-school youths help prepare lunch with the garden’s bounty. On the menu one day: vegetable or chicken curry, salad greens and quartered oranges.

On a recent sunny Friday at the foot of a brightly-painted stone wall mural featuring an Hispanic Jesus and a happy gathering of followers, 9-year-old Audrey Lemeur helped with the harvest at garden outside La Puerta Abierta United Methodist Church, one of Youth Farm’s many community partners and the landowner. 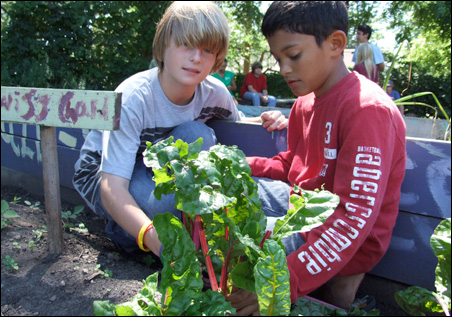 Audrey’s assignment: to pull ripe onions from Mother Earth’s grasp. Ask her when is an onion ripe enough to pull and she’ll tell you: “The plants are taller than the other plants and they’re fatter and the onions are coming out of the ground.”

Around her, children from ages 9 to 13 gather in “cooperative learning groups” led by teen interns and adult staff. “We do a lot of curriculum in the garden,” explained garden director Amanda Stoelb, as part of the growing to harvest and sale of produce.

Made a difference in his life
Ninety-five percent of youths in the West Side program live in the Humboldt High School neighborhood where the gardens sit.

Like Audrey, staffer Tyler Ryan started in the garden when he was 9. Now 19, and working with Youth Farm kids in summer while on break from Augustana College in Sioux Falls, S.D., he can offer the life perspective Audrey cannot.

Now in his 10th year with the program, he ticks off a variety of ways it has made a difference in his life.

“Well, basically besides getting me out of the house in summer working in the sun doing lots of work, it taught me how to interact with different youths from different backgrounds.” In his early years he worked side by side with many Hmong children, learning about their culture and making friends, he said.

Besides that, “I learned a lot about gardening while I was her and organic foods and the whole food process…I eat a lot healthier now. I owe that to Youth Farm,” Ryan said. Just like in his day, that learning process for kids continues, he said, laughing a bit at how he like today’s kids used to gorge on the snack Cheetos.

The program also “definitely teaches the value of personal property,” he said, revealing there are a few kids in the program who without it might have one day gone out to spray-paint a wall with graffiti or vandalize a garden.

“They won’t do that now,” Ryan maintains. “They realize when people put a lot of time into things there is a value to it.” Such respect for property benefits a community, he said.

For 14-year-old staffer Nat Cobbett, Youth Farm is a chance to earn a little money and something else: “I like hanging out with kids, learning how to do things instead of just playing sports and stuff.”