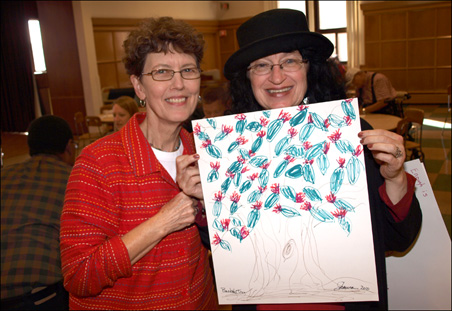 Speaking in the economic sense, we all pretty much know what’s NOT enough to make life comfortable, including the $22,000 for a family of four that the federal government has established as a national poverty threshold.

But Tuesday’s U.S. Census report  demonstrating that the top-earning 20 percent of Americans received 49.4 percent of all income generated in the country might have more of us pondering a question Nancy Maeker and others have been asking for a very long time:

What, exactly, is “enough”?

Now, provocatively, the group is calling on artists to use their talent to depict: “What is enough? Who has enough? Access to Enough for all.”  All media are welcome, from dance to drama, song to sculpture, video to fiber art, poetry to paint to photography. Already 20 artists have signed on for the show called “In Search of Enough” to be displayed around the state. More details here.

Yet even before these most recent U.S. Census numbers were released, Maeker, director of the statewide A Minnesota Without Poverty, folks at Bethlehem Lutheran Church in Minneapolis and other partners started brainstorming ways to get people not only asking but answering that question.

The goal is to initiate a conversation among people of all economic classes, says Maeker, a pastor with the Evangelical Lutheran Church. The discussion starts at 7 p.m. Thursday, Sept. 30, at Bethlehem Lutheran Church, 4100 Lyndale Ave. S., Minneapolis, when folks get together to hear author Lynne Twist speak about her book, “The Soul of Money.”

The book,  Maeker says, debunks the “myths of scarcity,” the belief that there’s not enough to go around, that more is better, that there are always going to be the very rich and the very poor.

Maeker argues this: “If we end poverty in Minnesota, that’s not just good for the people in poverty, that’s good for everyone.” Yet straight talk about the inequality in American society tends to bring some tempers to the boiling point, she acknowledges.

Thus, the art show. “It’s non-threatening,” she said, and it will get people talking, just as art did Monday at Central Lutheran Church in Minneapolis.

‘A good job. A nice house.’
Maeker preached to a racially diverse crowd of about 50 adults in the church’s Fellowship Hall – many of them drawn to the downtown church and its religious and social-service programs because the emergency shelters where they stay nights are closed during daylight hours. In shopping totes or knapsacks, these guests carried their belongings.

Later, they’d lunch on sloppy joes, potato salad and fresh strawberries or head downstairs to the free store for clothes or household items, for medical help, spiritual direction or referrals.

Maeker told a Bible story from the book of Luke about a rich man and a beggar, with the poor man finding his reward in heaven. Then she asked her listeners: “How would you picture enough? What would it look like, in pictures or words?” and passed out large sheets of white paper and colored markers.

Words were plentiful, such as these from Larry B.: “Enough in my life is: A good job. A nice house.  Happiness. Jesus. Family. God. Enough money to balance with work.”

But at least two people drew detailed pictures. In greens and browns, Harry Werner, from northeast Minneapolis, created a tidy little log cabin at lakeside, evergreens behind it, a man in a simple row boat fishing in front of it.

Jewelry artist Shauna Pineiro, who wore a wide-brimmed black hat and a lovely smile, fashioned a gigantic, fat-trunked, African Baobab tree. The tree, she said, is a symbol of enough, as it stores up water after rain, provides food for animals and lives for 1,000 years.  “It’s like the tree of life,” she said.