Bunk beds in dorms, yes, but baby cribs? Now that’s different, yet it seems there’s a crying need for just that kind of accommodation at the Hubert H. Humphrey Job Corps Center in St. Paul.

For some years, according to center director David MacKenzie, about 25 impoverished young mothers or more a year have had to turn down the opportunity for free academic and career training at the facilities — courtesy of Uncle Sam — because they couldn’t afford childcare while they learned. Or they had housing or other issues.

Pile on the fact that because of early pregnancies some had dropped out of high school. “What kind of job can they get without an education?” MacKenzie asked Thursday.

“Our end result is not just a diploma, it’s a job,” said MacKenzie, about the program that provides schooling and technical training to almost 350 men and women, ages 16 to 24, a year. If you’ve been to the Minnesota State Fair, you’ve probably seen the campus across the street, a no-frills cluster of buildings on Snelling Avenue.

Interestingly, it’s “probably the most diverse Job Corps in the country,” MacKenzie said, boasting 60 percent students of color, with probably half of those recent immigrants from Asia or Africa. To qualify for the tuition-free education and room and board, students’ income must fall below the federal poverty line.

Back to those moms and the kid-friendly dorm to open on the Job Corps campus this fall.

Funded in part by $2.3 million in American Recovery and Reinvestment (ARRA) monies, a century-old building has been converted into oversize dorm rooms en suite to allow as many as 18 very poor young Minnesota mothers and their children from across the state to live on campus.

While moms attend class, their children will learn and play at the Head Start care center located on the building’s first floor.

Most students live on campus during their training, usually stretching from 18 months to 24 months, and that’s important, said Cate Smith Edlund, the center’s business and community liaison, because it’s “essentially our job to get [students] into that rhythm of going to work, what they do. They don’t necessarily come from that kind of background.”

That rhythm means students in dorms live by a regimented schedule: they’re up and signed in with a resident adviser by 6 a.m., then take a shower, dress appropriately for the day, clean their rooms and closets, pass room inspection and head to the cafeteria before 8 a.m. class, she said. It’s all part of learning what the school calls life skills.

In classrooms, students progress at their own pace in individualized learning programs. They may choose training in business technology, facilities maintenance, food services, health occupations, medical office support or painting and wallpapering.

Administered by the U.S. Department of Labor, there are Job Corps centers in all 50 states, with 87 percent of graduates moving on to careers in the private sector, the military or to further education.

Edlund said she likes to say, Job Corps students “…have potential but no resources. For our students, their crime is being poor.” She talks about them often as she seeks employers for job shadowing and internship opportunities for students. 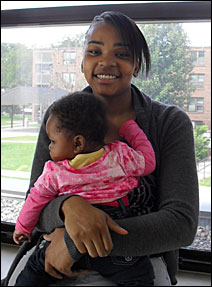 Photo by Heather Mueller
About to start classes at the Hubert H. Humphrey Job Corps, Brittany Mackie, 21, may live on campus with her baby daughter Londynn in a dorm for moms and their kids.

Brittany Mackie, 21, is a likely dorm resident. Mother of four-month-old daughter Londynn, Mackie is living in temporary housing in St. Paul right now, a long bus ride away from the school.

But she’d just heard she could move into a subsidized apartment. “I might just stay on campus because I think it would be better for me and my child.” That way, she said, she wouldn’t have to hassle with buses to get to school and could bring her daughter to daycare right in the dorm building. Beside, the rooms are “very nice,” she said, though she would have to abide by dorm curfews and other rules. “I’m trying to decide.”

With a work background of fast-food and restaurant jobs and only a little college under her belt, Mackie could benefit from the finance and business training she’s seeking at the center. “I want to own my own business, a daycare or clothing store,” she said. “They can help with a lot of things. I like the environment there, the diversity.”

And when she’s finished? “I’m going to work a job, whatever job they can help me find.”

U.S. Rep. Betty McCollum was on hand Thursday to celebrate the dormitory as well as a second renovated building for classrooms for students to train for railroad, airline, office and nursing assistant jobs.

McCollum praised students for leaving the Job Corps “ready to go into the work force and succeed.”