You might say corporate America is like the city of Oz to many economically disadvantaged kids and an impossible-to-travel yellow brick road away.

“It’s a foreign world to them. They see it outside their windows, but it might as well be a postcard to them,” says Jeff Tollefson, who’s making it his business to help students break out of poverty and into the corporate world. All the while, this former venture capitalist says, he’s evangelizing to the business community “…this just isn’t the right thing to do, it’s the smart thing.”

Tollefson heads Genesys Works-Twin Cities, a non-profit program based in downtown St. Paul that teaches low-income high school students the job and professional skills they need to succeed in the corporate world. The program then places them in short-term, paid jobs with any of 28 corporate partners, including among them Medtronic, Ecolab, Xcel, 3M, Travelers, Accenture.

They’re young people like Bao Thao, a graduate of the program, whose face smiles from the Genesys-Twin Cities website and whose words are echoed by other students:

“Because of Genesys Works I now believe that I can achieve anything I want in life if I strive for it,” she says. She worked as an information technology technician at Medtronic last school year along with four other students, while a senior at St. Paul’s Como Park High School, and is in her first year at Northwestern College in Roseville.

And there’s Dionne Griffin, an “A” student from Humboldt High School in St. Paul who is now a freshman at the University of Minnesota with his full tuition covered, having been named a Horatio Alger Scholar, a Dell Scholar, a Puckett Scholar and Wallin Scholar.

His Genesys internship in IT at Ecolab in St. Paul ended a couple of weeks ago. 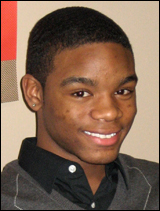 “It’s really extraordinary the stuff we learned,” Griffin, 18, said, “not only the technical but one of my favorite things is the environment around positive people who want to help you do better and themselves as well.”

In everyday life, Griffin said, “Not everybody is positive. Not everybody thinks in a way that benefits other people and benefits themselves. They think destructively. All that peer pressure in high school, it’s not all beneficial.”

The program gives kids self esteem and life skills and lets them see they have more potential than they ever would have imagined for themselves, says Rene Aultman, St. Paul Public Schools liaison with Genesys.

The St. Paul district piloted the program three years ago, an offshoot of that begun in Houston, Texas, and praised by President Obama. A third program started this summer in Chicago.

This year St. Paul has 55 students enrolled in Genesys, with students also coming from Minneapolis, Robbinsdale and Richfield school districts.

Last year Genesys trained 45 students from area high schools, placing 35 of them in information technology jobs, after a first year pilot program with 16 students “to show everybody it worked,” said Tollefson, who was in the venture capital sector doing for-profit startups for 20 years. He also sits on the board of Social Venture Partners Minnesota, www.svpmn.org 35 local businesses that pool money, time and talent to help non-profits with innovative models serving at-risk youth.

Genesys, he says, is “a business approach to solving a community problem.”

By that he means the program addresses both the “achievement/opportunity gap” of low income high school students — including students of color and recent immigrants — as well as the present and future needs of the state for an educated, trained workforce, as reported in MinnPost here.

“We’re providing life-changing opportunities for these students while companies get motivated resources. Our community really wins,” Tollefson said. Only those students “who have earned a right to a job” through performance, attitude and commitment go on to earn job placement, he said.

“This program is really head and shoulders above any program” said Vandy Johnson, vice president for global IT infrastructure at Medtronic, a medical device company that has had students the last two years, signing on nine this year.

“We have had really well-grounded individuals,” said Johnson, explaining that students arrive “computer knowledgeable” after an eight-week summer training course where they also learn workplace behavior and etiquette and dress code.

Students work four hours a day after school at Medtronic as contract employees provided by Genesys in positions like desktop computer support, and this year will do some software testing, as well, Johnson said.

Because of the students’ preparation, “it’s such a win-win for us at Medtronic. There’s very little risk in the process,” Johnson said. If there is a personnel issue — say transportation from school to the workplace, Genesys handles it, he said.

Genesys pays wages between $8 and $11 per hour, based on a student’s job performance and participation in their college preparation program, operating like a for-profit IT staffing company, Tollefson said, with 85 percent of Genesys’ operating budget coming from earned income.

This video, produced by the Saint Paul school district, highlights the innovative Genesys Works program in the Twin Cities.

“We aren’t relying on taxpayer dollars or completely on charitable giving to provide our social mission,” Tollefson said.

A recent ceremony marking the new crop of students transitioning from job training to job placement this week gives an idea of these students’ backgrounds.

“Kids say they were ready to drop out of high school, now they’re triple-majoring at Concordia,” Aultman said, relating some of the student stories shared.

Students talked about coming from poor, single-parent homes, moving from place to place. One suffered from depression but has gained self confidence through the program. Another student talked about growing up in a neighborhood with gangs and drugs and this was the opportunity of breaking that cycle, Aultman said. A young man, who came here from Vietnam four years ago, gave a keynote speech at one event, saying before the program he hadn’t had the self confidence to speak up in class.

“I’m sure that’s not 100 percent of the stories,” Aultman said, “but all the students I talked to find [Genesys] a very valuable experience for the friendships and contacts. The program shows them they can reach or succeed far higher than their original expectations.”

Genesys’ Summer Class of 2010, starting in jobs this week

How many:  74 students from 16 high schools employed at 27 workplaces