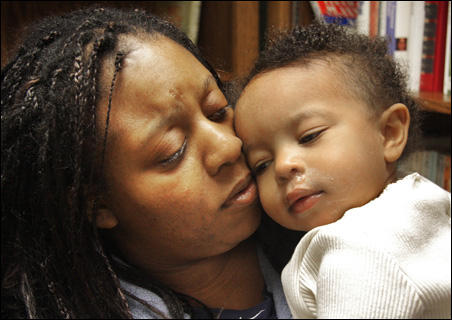 MinnPost photo by Peter Koeleman
Waukisha Ellis cuddles one-year-old daughter, Faith, at the family shelter in Minneapolis where they live.

Moving away from People Serving People to permanent housing and secure jobs, those are Gregory and Waukisha Ellises’ goals.

Returning from Oregon last August to home in Minnesota, they arrived buoyed by optimism and with educational credentials and job experience they hoped would translate quickly into steady jobs and a place to call home.

Only family here wouldn’t or couldn’t help and they and their children — Malachi, 4, Gabriel, 2, and Faith, 1, found themselves homeless. For now they’re staying at People Serving People, a temporary shelter for families.

We continue the story we began yesterday.

Coming here
The Ellis family history is punctuated by both successes and challenges since they married in 2003: steady employment, lost jobs, a stint driving “up and down” the West Coast because “life’s an adventure,” their son Gabriel’s past medical problems, some housing problems involving late rent payments from a public agency and their charge of racism against another landlord.

The Ellises say Greg’s recent job loss and poor employment prospects brought them back to the Twin Cities from Beaverton, Ore., just outside Portland. Health problems — Ellis broke his leg — factored in as well.

They felt sure they’d find work here: she in banking or customer service jobs, he in the food industry or management sales. Greg had more than a couple of years at Metro State University before switching gears and graduating from Le Cordon Bleu, a culinary school in Minneapolis.

For many years he worked in the food industry, including for a major hotel chain, opening up restaurants across the country. But that lifestyle once seemed too hard on a family, Greg said. In retrospect, he regrets leaving the restaurant industry. “I probably should have stayed cooking.”

Before leaving the northwest, they sold their Ford Taurus and other belongings, packed a few clothes, a laptop computer, crafts and toys for their children and bought Greyhound bus tickets for Minneapolis, arriving with a stash of cash and five bags.

They made a $470 down-payment on a downstairs apartment in a St. Paul house, but that deal fell through, with their losing most of their deposit, Greg said.

With no place to lay their heads, they spent a few days with a friend, two nights sleeping at Minneapolis St. Paul International Airport, and additional nights at The Drake Hotel, Hennepin County’s overflow homeless shelter for families.

At People Serving People, they have access to advocacy services, a computer lab, daycare, a medical clinic, job counseling and other services. 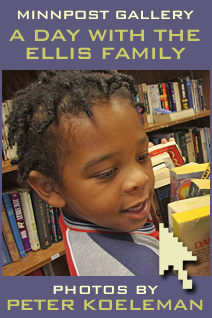 This day Waukisha is off to talk with a PSP job adviser, Greg to amuse the kids in the children’s library.

She meets with PSP intern job counselor Danica Daleiden who is helping her work up a job resume listing not only jobs but the job skills she’s acquired over the years. The materials detail her customer service certification, problem-solving abilities, work as a bank teller and “excellent communication skills and dependability.”

“It actually sounds really good. It sounds lovely,” Waukisha said, though admitting, “I’m trying so hard not to go back into banking right now.”

Yet skills learned will translate to other kinds of jobs as well, Daleiden tells her, explaining how she’ll receive a CD of the resume and a cover letter. She hands her a black pocket folder listing job websites and shows her a three-ring binder listing current jobs.

Would she like to set up an appointment to practice job-interviewing? Yes, Waukisha says, adding, “I’ve always been terrible at that.” Once she has an interview, PSP will see she has interview clothes, head to toe.

Later she’ll head to the on-site computer room to check her emails, pointing to a request from Delta Airlines — more than a week old — for the names of people who can recommend her.

Though a staff person helps Waukisha find the reference’s New York City address, she says she can’t follow up right then. This particular afternoon the Ellises must go to Sabathani Community Center to look for clothes for their children.

In the library
In the library down the hall, Waukisha tells Greg the jobs adviser “… did a rocking job…but I don’t want to count money.”

Around them, Gabe — the “one-shoe wonder” because he’s always kicking off one shoe or the other — and baby Faith look at books but Malachi grabs a huge armful off a shelf and drops them to the floor.

His mother scolds gently. “When you do that Malachi, Mommy has to clean it up and Mommy gets cranky,” she tells him. The boy looks a little contrite and comes to her for a hug.

You’re so mellow, I tell her. “Cindy doesn’t get to see me about a quarter to midnight,” she said. “I get anxiety. I know I’m going to be locked in, that I can’t go outside for a smoke.”

It’s the looking for jobs that can get them down, the Ellises say, the hundreds of qualified applicants for the same job in these recessionary times. Still, he expects life will change for the better now, with PSP and the family’s access to county support programs.

“I’m being smart. I’m utilizing resources,” in an effort to get back on the self-sufficiency track, Greg says.

Lunch cafeteria style
Midday, Waukisha leads the family to PSP’s dining room, choosing a long table against a back wall, out of the mainstream in hopes her children will settle quietly to eating rather be distracted by the people around them. 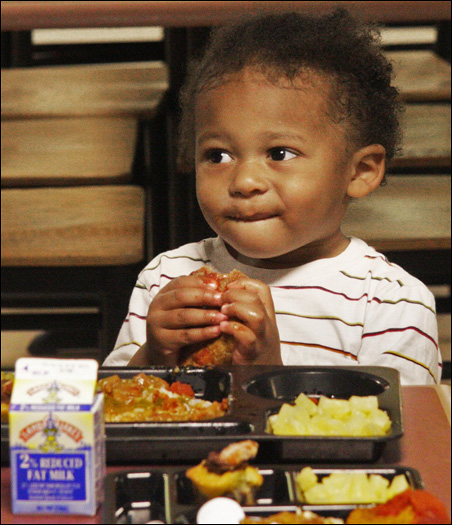 At the table, Greg and Malachi pray: “Thank you, Jesus, for all our food and our family. Amen.”

The food is hot and tasty but it doesn’t take long for explorer Malachi to start roaming the lunch room, stopping to chat with friends, including Lauren Rimestad, PSP’s development coordinator. Across the table from her sits Craig Lewis, a distinguished black man in a dress suit who is PSP’s incoming president and CEO.

“Are you Obama?” Malachi asks him.

On the bus
After lunch, when many pre-schoolers head for the sheets and their afternoon nap, the Ellises and their children trek to Sabathani Community Center free store to search for children’s clothes. They’re a close family, “a team, a unit, a little company,” Greg says, hugging often, going nearly everywhere together. Still, it’s a tiring trip for short legs.

Our seven-mile roundtrip by foot and by bus — factoring in a stroller only for Faith, bus transfers and bus waits — takes about 100 minutes, compared to the 14 minutes MapQuest clocks for a roundtrip drive to Sabathani Community Center on East 38th Street.

On the bus, a big and tall man gives up his seat to a tired Malachi.

Greg worries he won’t have time to make a necessary phone call. He needs to call a staffer with the Rapid Exit Program for Hennepin County, a national model for speeding families transition from emergency shelter to permanent housing, says Cathy ten Broeke, coordinator to end homelessness for the City of Minneapolis and Hennepin County. Federal stimulus in the form of $6.5 million aids that program and other homelessness prevention efforts, she said.

Still, for want of a phone, Greg can’t make that call from a bus, though he could make it from PSP where he is assigned a Voicemail phone number. Lunch time and three hungry kids took priority, however.

So I hand him my cell phone. He calls, gets Voicemail and leaves his name and number in a game of phone tag.

Clothes cache
At Sabathani, Waukisha heads to the clothes shop where she’s handed a white plastic bag and given 15 minutes to make her selections. In a small room with shelves and racks marked by size and gender, she heads for the children’s clothes.

“Oh my gosh, oh my gosh,” she says at finding pants and jeans for Malachi. For Gabe there is a pair of pants and two shirts, for Faith, pajamas and sweat pants. For herself, a sweatshirt and then, “I found coat; I found a coat!” she marveled. “This is beyond a blessing.”

For Greg, there is nothing.

Still, they’re thankful as they head back to the corner bus stop. The lumbering vehicle lulls all three children to sleep.