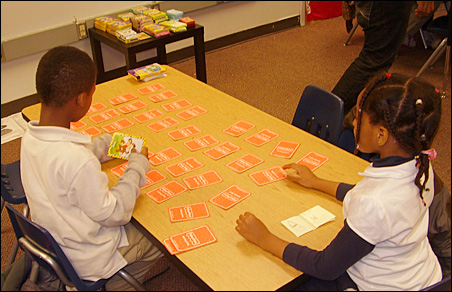 MinnPost photo by Cynthia Boyd
Playing a card game to improve memory and concentration are Jordan Gwaltney, 7, and Favor Osojuri, 5.

The regular school day is done, but instead of heading home this recent Wednesday to television or video games or play, they proudly come here to an after-school program where teachers call them scholars and they learn that if they put their minds to it, they can achieve.

After the “hellos” comes the question.

“Where’s your homework?” lead teacher William Hill asks a girl settling in at a study table.

“Get it. You know the drill,” Hill directs her, turning around to tell me his pupils know the routine is homework first, followed by snack and then circle time where today they’ll consider perseverance.

At Project Spirit, African-American children find not only homework help, but also increased self confidence, explains the Rev. Darcel Hill, the program’s director, all part of an effort aimed at closing the academic achievement gap and guiding these children on the path to becoming well-educated and successful.

Funded by the St. Paul Area Council of Churches, the program also provides academic enrichment activities and strengthens children’s identity as people of African descent. “They study the lives and contributions of African-American achievers throughout history,” Hill said, and do community-service projects. “We want to develop committed and civic-minded leaders.”

The goal? “We begin to develop a college-going culture in the hearts of our children,” explained Darcel Hill, aunt of teacher William Hill.

That can be a tall order at Maxfield, a school in transition and one of the 34 persistently lowest achieving schools in the state located in St. Paul’s Summit University neighborhood along Interstate-94.

Students as young scholars
Project Spirit is part of a broad plan to improve academic achievement at Maxfield, says Nancy Stachel, who took over as principal last January, and welcomed the program into the school.

Calling it  “a great program,” Stachel says, “We have definitely seen improved student focus, students seeing themselves as young scholars, which is huge.”

She remembers one young, frustrated student in particular who last year was struggling with academics and misbehaving. 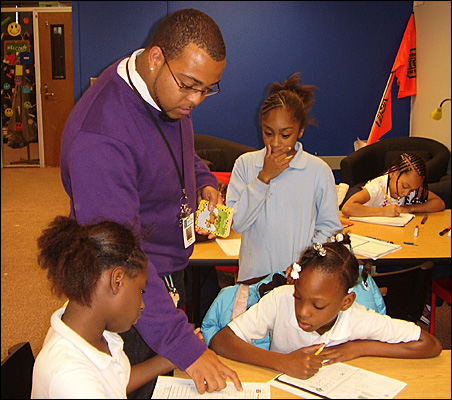 Then staff got him involved with Project Spirit. “He may have been experiencing the same level of frustration, but how he chose to respond was different. Instead of seeing him get frustrated and acting out, we saw him hunker down with an attitude of confidence that he could do it,” the principal said.

Parent Camilla Johnson, too, is a staunch supporter, calling the program “awesome,” telling me that last year her daughter was struggling with math and ranking at the 30th percentile, but now has reached grade level. Johnson has also become more involved with her five children’s education, thanks to the program.

“We set high expectations for them and they actually exceed our expectations,” Darcel Hill said, talking about encouraging and building on the assets of the children. “We are making a difference in helping close the achievement gap,” she said, adding that the program is endorsed by the St. Paul Public Schools Foundation.

Started on the west coast, Project Spirit came to St. Paul in 1994 when a group of African-American pastors concerned about the academic achievement of African-American children and barriers to their success, found financial support from the St. Paul Area Council of Churches.

Schools provide meeting space, as well as snacks, while the Council of Churches picks up the cost of salaries of two or three teachers at each site. Costs are about $2,000 per student per year, Hill said.

She stressed that though the council is a religious group, “We don’t proselytize.”

‘Try and be polite’
I watched Project Spirit teachers William Hill and Darius Lyles in action, weaving around the room looking over the shoulders of children kindergarten through sixth grade, checking on math and other homework, dishing out help and reminders like: “Try and be polite.”

Walls and boards are plastered with educational reminders: multiplication tables, the ABCs. Written on a whiteboard are words meant to build their self esteem and govern their behavior: “I am in charge of myself.” 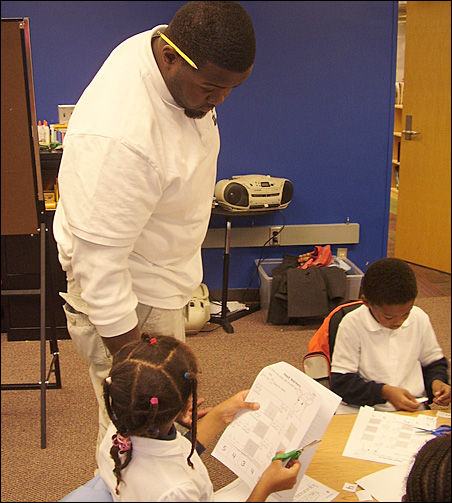 When the din of voices rises to maximum volume, William Hill intones a familiar phrase: “I have…” waiting for a chorus of youngster voices thundering: “reeeespect.” The classroom management technique reminds them to lower their voices and increase their concentration on work at hand.

After a snack of milk and animal crackers, it’s circle time and a discussion of perseverance.

“Even when times are bad, you don’t give up, you don’t quit,” William Hill says.

Then it’s their turn, each must share how he or she was challenged by difficulty but didn’t give up.

To get them moving, teacher Lyles tells how when he was on his high school chess team, his chess coach died in an accident. The team could have fallen apart, he said, but “we bonded, we went on to win the state championship.”

Talea Williams, 10, understands the concept. “When I had a tryout for my dance team, I was shy. I was new.”

“Did you make it?” Hill asked her.