That finding and others being released today demonstrate disturbing inequities in health among Twin Cities area residents.

Good health and longevity, it seems, depend not only on a person’s genes but also their zip code, their ethnicity and race and how much schooling they’ve had, according to a new report prepared by Wilder Research and commissioned by the Blue Cross and Blue Shield of Minnesota Foundation.

Presented this morning in St. Paul, the report, called “The unequal distribution of health in the Twin Cities,” reveals that here as elsewhere across the nation a person’s health is heavily influenced — as much or more than 50 percent — by these social factors: income, education, race and neighborhood.

Generally, the unhealthy are non-white and poor, according to the study. [PDF]

The study is rich in statistics but not surprising for the health disparities it uncovers, said Nan Madden, director of the Minnesota Budget Project, who has seen similar racial disparities here with regard to income, education and poverty rates. 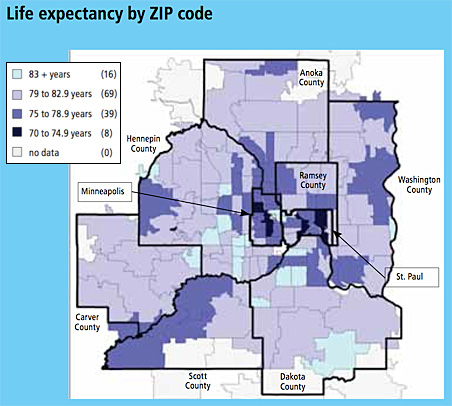 For those who would ask: “Why are there racial disparities? And are they ‘inequities’?” the report writers say this:

“…[W]e argue that it is not race itself that causes the disparity, but rather the social and economic disadvantages heavily concentrated within populations of color that cause poorer health outcomes within these groups.”

As a group, people of color in the Twin Cities area — except, often, Asian and Latino populations and African immigrants — fare worse than whites on a number of health measures, including birth weights, obesity, diabetes and mortality, according to the study.

For instance, in Hennepin County 39 percent of U.S. born blacks are obese and 12 percent have diabetes. For American Indians, it’s 32 percent and 18 percent, whites 19 percent and 5 percent, and Asians 5 percent and 7 percent.

The report also charts leading causes of death in the Twin Cities seven-county region between 2005 and 2007, correlating those with racial and ethnic groups, median household income, poverty and educational achievement.

Prepared in cooperation with an advisory group representing more than a dozen health, government, education and other groups, the study characterizes the inequities as unjust and avoidable, while also crediting many in the state who are already working toward helping Minnesotans gain equal opportunity for good health.

Among the significant findings in the Twin Cities region from the report, prepared by Craig Helmstetter, Susan Brower and Andi Egbert of Wilder Research, are the following. 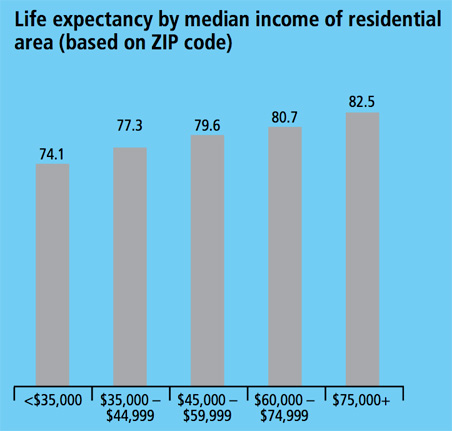 Education: Those with the least education have a life-expectancy of almost five years less than those with at least a four-year- college degree. 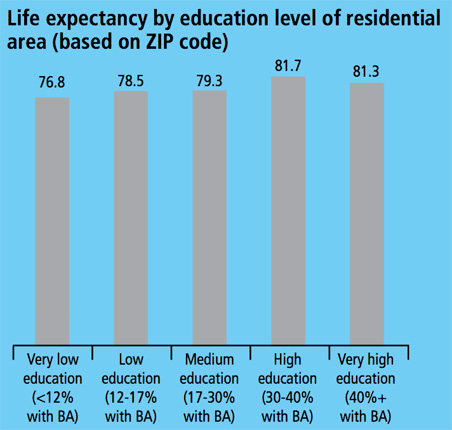 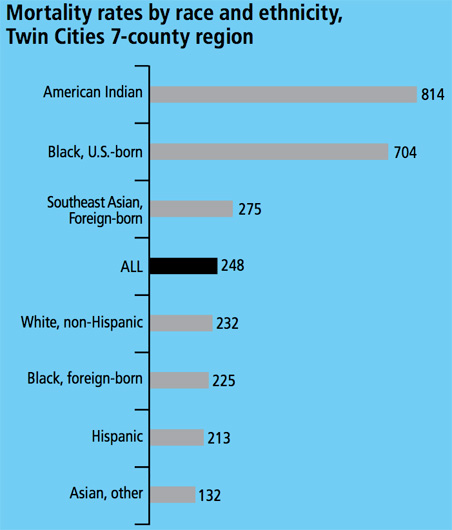 Source: Wilder Research, Blue Cross and Blue Shield of Minnesota Foundation
Numbers in table above are per 100,000.

Reactions to the findings are peppered throughout a supplement to the report and in accompanying statements, including these.

From Dane Smith, of Growth and Justice: “Not just the poor and racial minorities benefit from greater economic security and reduced inequality. Research shows that mortality and longevity rates are superior for all income levels in the more equal states.”

Dave Wallinga, a physician with the Institute for Agriculture and Trade Policy, challenges Minnesota to “envision a new kind of leadership body comprised of various foundations and firms, hospitals and health plans, nonprofits and neighborhoods, to work together around the common goal of making Minnesota’s community environments the healthiest in the country.”

Atum Azzahir of the Cultural Wellness Center, calls for strategic efforts.  “…[E]ffective initiatives and polices will not only have to draw upon the experience and knowledge of community members, but will need to strategically support these groups in leading interventions that target gaps in conventional health planning.”

Madden, from the Minnesota Budget Project, says, “The economic future and quality of life in the Twin Cities depend on everyone having access to opportunity. That means quality jobs, a good education and all the things that make for a healthy life.”

Marsha Shotley, president of the Blue Cross and Blue Shield of Minnesota Foundation, said: “We’ve learned the truth about health inequities in our area, and our determination for change is renewed. Our hope is that policy makers, community residents, business leaders, educators and all of us who volunteer and vote will speak loudly and help plot a future of growth that includes every Minnesotan.”