Given the numbers, we know the poor and homeless live among us. We pass them every day, in schools, on sidewalks, in the mac-and-cheese aisle at the grocery store.

In Minnesota, at least 13,100 are homeless on any given night. People of color make up at least 62 percent of the state’s homeless population. Eleven percent of Minnesotans lived below the federal poverty line last year.

But who are they, really?

You’ll have the opportunity to meet a few of them in photographs and on stage in coming days. The effort is part National Hunger and Homelessness Awareness Week, but don’t overlook the poignant timing of these events: Thanksgiving, the symbol of plenty in America, is next week.

In pictures
Thirty photographs, including the three on this page, are going on display today at a local college. They allow us a glimpse into the lives of poor and homeless people in the Twin Cities. In the exhibit, we see them in charity lines and at homeless shelters, on bicycles, or otherwise making their way through life. 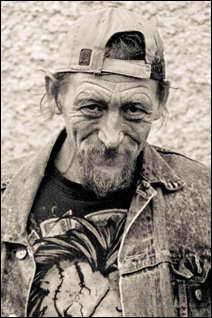 Photo by Jacob Walter
Tim Shankey waits in line at the Simpson Housing shelter in Minneapolis for a chance to “win” a bed for the week in the shelter’s weekly lottery.

In the end, the hope is viewers will walk away realizing “these are people like you and me,” explains Peter Koeleman, a photo journalist and teacher at Minneapolis Community Technical College, whose students and faculty produced the photos in a partnership project with Downtown Congregations to End Homelessness.

Called “Scratching the Surface: A Glimpse into Poverty and Homelessness,” the photos have “an all-time, old journalistic look about them” and are printed in sepia-like tones, Koeleman said. “We felt the color would take away from the message.”

The black-and-white photos convey a grit, he said, reflecting the many feelings photographers saw among the poor and homeless.

“I saw humility. I saw humbleness. I saw pride. I saw hope and I saw no hope, but more hope than no hope,” Koeleman said.

All in all, six students and three faculty members took photos, in cooperation with about 10 different agencies providing services to those in need, explained Jack Mader, lead faculty in the photography and digital imaging program at MCTC.

The opening reception is from 5 to 7 p.m. today in the T Building Skyway on the MCTC campus at 1501 Hennepin Ave., Minneapolis.

The exhibit continues through Nov. 24 and is one of a series of events planned at the college this month “to dispel myths that often label homelessness as someone else’s problem or claim that an end to homelessness is impossible,” according to an MCTC news release.

A traveling version of the exhibit will be displayed at faith congregations around Minneapolis, a tour that began last Sunday at Hennepin Avenue United Methodist Church.

For Koeleman, the exhibit illustrates the truth of an author’s note in a book by Chris Bohjalian, “The Double Bind”: “We tend to stigmatize the homeless and to blame them for their plight. We are oblivious to the fact that most had lives as serious as our own before everything fell apart.” 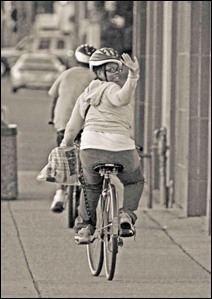 Read more about the project here.

On stage
“It’s not ‘these people,’ it’s us,” Lecia Grossman told me last year in talking about the homeless and their plight as well as her theater group’s effort to tell the stories of real people not so different from you and me, except for the fact they are homeless.

As zAmya’s actors take to the stage this week, they’ll continue the tradition, started by Grossman, of using theater to increase awareness and understanding of homelessness.

Ten of the 12 actors performing in the production of “Homeroom” are or were homeless. They recall on stage what it’s like to sleep under a bridge or in a homeless shelter with 150 others and muse about the road that led them into and out of homelessness. Expect humor, too.

This year’s troop of actors worked together to write the show, explained artistic director Maren Ward. “Each individual person wrote a component either based on their own experience or on an interview they did with somebody,” she said.

zAmya comes under the umbrella of St. Stephen’s Human Services in Minneapolis, an organization working with the homeless. It’s supported with funds from the Metropolitan Regional Arts Council and the Legacy Amendment.