Homeless adult singles sleep on chairs and in hallways for want of adequate emergency-shelter space in Hennepin County. 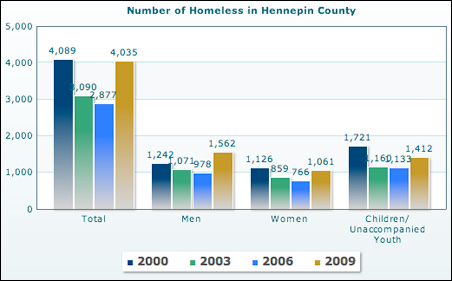 To ease that situation, Minneapolis city officials next month will receive a proposal to open a temporary overnight shelter that would house 30 homeless men and 20 women at a downtown Minneapolis church.

According to Wilder Research, the county hasn’t seen such high numbers of the homeless since 2000.

If the temporary shelter comes to fruition, 50 more homeless people would have a mat to sleep on indoors from 6 p.m. to 7 a.m. through the arctic winter months, although advocates for the homeless argue they need space for 100 people.

Though support appears solid, advocates face a public hearing before the proposal goes before the Minneapolis City Council.

Right now 300 people or more may be sleeping outside in Hennepin County, says Cathy ten Broeke, coordinator to end homelessness for Minneapolis and Hennepin County with the Office to End Homelessness/Heading Home Hennepin.

The crux of the problem: “We have people falling into homelessness who never believed they would be dealing with this,” said ten Broeke. So even though programs are moving people out of shelters and into permanent housing in Hennepin County faster than ever, the economy has created “a river of need,” she said.

Hennepin County currently has about 800 beds for single adults in five emergency shelters.

Where the proposal stands
Hennepin County commissioners have already authorized $117,000 to operate an overnight shelter at First Covenant Church, 810 S. Seventh St., between the Metrodome and the Hennepin County Medical Center. But the Minneapolis City Council has to approve the plan before the shelter can open.

It’s the humane thing to do, says David Fields, community development coordinator for the group. Yet the association’s land-use housing committee stipulates the shelter be operated seasonally only.

Fields explained that Elliot Park neighborhood — being right downtown —  is usually the first neighborhood thought of when there is an expansion of social services, but the group also wants to grow retail services and commercial development for the benefit of its residents, both those in affordable housing and condominiums.

Others may voice support or opposition at a public hearing on the plan before the zoning and planning committee at 9:30 a.m. Dec. 2 in Minneapolis City Council chambers. If an interim use permit is approved, the proposal would likely go before the full council about a week later.

Over the last 16 months, the Salvation Army Harbor Light Center, the primary overflow emergency shelter for single adults, has provided 13,000 “overflow shelter nights,” with the number of single adults requiring shelter ever increasing.

“We don’t turn anyone away. We’ve put them up where ever we can,” said Steve Horsfield, chief operations officer of the Salvation Army Harbor Light Center, which would operate the proposed new shelter as well.

Overflow means handing out mats for people to sleep on in the chapel as well as in hallways where the lights must remain on 24 hours a day, he said.

“The real red flag went up when on a fairly mild night in September” when 60 more people needed shelter over and above the regular capacity, Horsfield said. At that point five shelter providers approached city and county officials to ask for space for 100 more temporary shelter beds to get through winter.

Looking for second shelter
Advocates for the homeless are also looking for a site for a second seasonal shelter to house 50 more people at a still undisclosed location as they try to muster support.

The need comes despite successful efforts through the Currie Avenue Partnership, which has helped move 100 people with major disabilities, including mental illness and chemical dependency, out of shelters into housing in connection with a state program, ten Broeke said. That project was kick-started with funding from local individuals, faith congregations and businesses.

Minneapolis, ten Broeke said, has a lot to be proud of in terms of working with its homeless, contrasting it to places where the homeless have established tent cities.

“While things are bad, I can tell you with all honesty, they would be much more dire if we weren’t doing all we are,” she said.