Republicans soon will take control of the Legislature facing a $6 billion biennial budget deficit, and spending cuts are in the offing, including possible reductions in so-called “safety-net” programs.

These programs are intended to help the poor, jobless, hungry, homeless and ill, and the state’s safety net is expensive.

For example, Medicaid, MinnesotaCare and the other major health programs for the poor alone consume roughly one-fifth of state spending.

On top of that, the number of people eligible for state help is growing in this distressed economy. A few indicators:

* The number of homeless, according to Wilder Research’s most recent count last fall, rose about 25 percent compared to three years previously.

* Changes in eligibility guidelines for the federal Supplemental Nutrition Assistance Program, which is known in Minnesota as the Food Support Program, this month made tens of thousands more Minnesotans eligible for help.

* This fall about 4,000 low income families statewide faced a waiting list for Child Care Assistance from the state to help them pay for childcare, enabling them to go off to work.

What will a Republican-led Legislature do with these safety-net programs?

MinnPost turned to GOP Rep. Morrie Lanning from Moorhead, an eight-year veteran of the state House who has taken a close look at poverty and the poor. 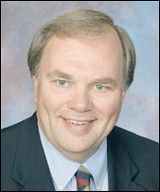 Lanning served on the bi-partisan Legislative Commission to End Poverty by 2020. He also co-authored with Republican Sen. Michael Jungbauer, East Bethel, a bill last session to create the Ladder Out of Poverty Task Force, which met for the first time in October.

The commission finished up last year after presenting recommendations to legislators. The task force is concerned with efforts such as mentoring the poor, teaching them financial literacy and enabling them to accumulate financial assets. Lanning and Jungbauer co-chair the bi-partisan task force.

Lanning wouldn’t discuss specific spending cuts — although he did indicate lawmakers may tighten eligibility requirements for some programs — and instead outlined a general approach to dealing with safety-net spending.

Here are excerpts from my interview with Lanning:

MP: First, do you anticipate cutting safety-net programs? Which?

ML: Undoubtedly as we face the budget shortfall we’re looking at here, the Legislature is going to have to take a look at spending across the board, where our costs are going up and to try to get a control on it. Right now health and human services costs are going up at an unsustainable rate. The state economist is saying right now the average annual increase is more than 8.5 percent. In reality, we have had some double digit annual increases.

MP: What is the answer?

ML: The answer is to grow the economy. The main reason why Minnesota’s economy is struggling is tied to jobs. We don’t have enough people working and have people working in under-employed situations. That results in less revenue to the state. In order to grow our economy, we have to grow jobs.

MP: What about those Minnesotans who cannot work because of disability, illness or age? Are they in danger of losing financial support?

MP: Are you suggesting different ways of determining who needs help?

ML: Yes, we have to look at eligibility. If someone is making good money, we can’t afford to subsidize them.

MP: You think there are people out there who are receiving money they should not be?

ML: We have various programs that provide support to people making over $50,000 a year.

MP: Can you give examples?

MP: Will you accept more money from the federal government to help pay for social services?

ML: It’s all going to depend on the governor. [Gov. Tim] Pawlenty has indicated he’s not going to go down that road.…The new governor will have an opportunity to weigh in on that.

MP: What about the Supplemental Nutrition Assistance Program that replaced food stamps? Is that one of the programs you would look at cutting?

ML: Let me make clear: I’m not on the health and human services committees. People on those committees will have to look at all that. The basic message I want to communicate is we absolutely want to take care of people who cannot take care of themselves, but given our budget situation, we’re going to have to take a good hard look. That’s not going to be an easy process. The reality is the road we are on now is a dead-end road. What we’re trying to do with the poverty initiative is to help people climb out of poverty, to help people become taxpayers.

MP: Some in the Republican Party have pledged no new taxes. Is that your position?