A conversation on poverty and the concept of “enough” as in enough food or money or clothes or house: that’s the idea behind Thursday’s third Statewide Gathering to End Poverty by 2020.

The idea is to bring together policy makers, legislators and people from all walks of life to take a close look at poverty and brainstorm ways to combat it, says Nancy Maeker, executive director of A Minnesota Without Poverty, the group inviting the conversation.

The goal of ending poverty is no small feat, of course. Last year 11 percent of Minnesotans lived below the federal poverty line, up from a low of 7.9 percent in 1999, plus 13,100 persons were homeless — a 25 percent increase over a previous Wilder Research count in 2006. Among those numbers, persons of color are hit much harder than whites.

So, is it an achievable goal?

I asked Jack Nelson-Pallmeyer, a 2008 candidate for the U.S. Senate and social activist who teaches peace and justice studies at the University of St. Thomas and has written a dozen books on hunger, poverty, justice and related topics. He has no direct connection to the poverty group, but, like AMWOP, has deep roots in the Lutheran social justice efforts. 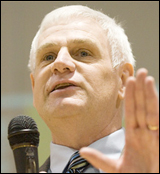 “It really is a doable goal,” Nelson-Pallmeyer said, even in the current economic climate, calling this grassroots, anti-poverty group “a worthwhile effort.”

“Probably not in 10 years, which is why they need the conference and need a whole lot of people to be engaged,” he added. Yet now might be the time for people to take a stand in support of the poor, Nelson-Pallmeyer said.

He explained: “In terms of public policy, it’s easier to balance the budget on the backs of the poor than on anybody else. They have borne enormous cuts. The hopeful side is that that is increasingly seen as indefensible by a wide range of Minnesotans who recognize a need for basic decency and decent fairness.”

Issues of equity
The assistant professor said public discourse on poverty must include discussion on issues of equity as well as the impact that military spending has on unmet human needs.

“If we really want to end poverty, we’re going to need to have an economy that distributes the benefits much more equitably.” Ninety percent of income gains since 1980 have gone to the richest 1 percent, he said. “It’s an astounding degree of accumulated wealth. It’s fracturing the society.”

Already AMWOP, a group that started in the Lutheran church but which supporters see now as a movement sending waves beyond the faith community into broader society, has made its presence felt. It was the impetus for the bipartisan Legislative Commission to End Poverty in Minnesota by 2020. [PDF]

“It may look pretty dismal right now but we have nine years and we can do it,” Maeker said, referring to the 2020 deadline. “The bottom line is to see where we are. The second thing is to issue the call to action,” she said.

The events features local programs and a web link with comments from state GOP Rep. Morrie Lanning, Moorhead, co-chairman of the Ladder Out of Poverty Task Force, and Gary Cunningham, vice president of programs for the Northwest Area Foundation.

The Minneapolis meeting features art exhibitions, poetry, storytelling and dance performances on the theme “In Search of ENOUGH.”