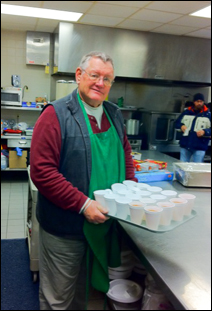 MinnPost photo by Cynthia Boyd
The Rev. Wesley Wheatley helps prepare free breakfast one recent winter morning for those who sleep in shelters or outdoors.

These bone-chilling January days the breakfast line starts forming before sunrise at the front door of the Citadel, the Salvation Army’s building on West 7th Street in St. Paul.

That’s because homeless shelters where they’ve spent the night mostly don’t serve breakfast. Thus a morning parade of homeless men and some women head to the Salvation Army in search of a free, hot meal.

A morning parade of homeless men and some women walk a mile or more, past that symbol of affluence, the Xcel Center, to get to the Salvation Army in search of a free, hot meal.

I came there last Thursday looking for the working poor and met Jacob, too embarrassed about his status to share his last name.

“I try to keep the homelessness on the down-low,” says Jacob, a divorced dad wearing a fake leather cap with ear flaps and a sweatshirt preaching the Christian gospel.

Only 35, he’s desperate to find his way back to a full-time job with benefits and his own roof over his head, instead of the propane-heated tent he sleeps in behind the Union Gospel Mission where he uses the showers, or at his mother’s house in New Brighton.

Jacob had worked as a baker for 10 years but was fired a couple of months ago. “I lost my temper and smacked somebody,” he tells me solemnly. He earns a little money making candles, but calls that a “dead end” job, and hopes he’ll be hired to another position he’s applied for.

I met Mitch, a man who lives homeless and seemingly wouldn’t have it any other way, as well as others struggling with emotional problems, or pretty obviously battling chemical dependency demons or the wages of past criminal actions.

“I came to the street in ’95,” Mitch says, looking for a nephew. He’s got family in Detroit who want him home, but he gets along through charity and a small pension from a job making motor blocks. “I’m not enjoying myself, but I’m not miserable,” he says.

Fit for the King
Salvation Army staff and volunteers serve breakfast to 850 to 900 people a month, dispensing nutrition for body and soul.

A red-aproned Wesley Wheatley, a reverend, gathers together the kitchen crew for prayer before the food goes out: “Lord God, let us serve a meal that is fit for the King,” he says.

The Salvation Army budgets $100,000 a year to feed these folks, an average 6,000 meals a month, purchasing food and using food donations from grocery stores, restaurants and schools, explains Yvonne Dobler,  a staff member who oversees the charity’s social services.

Later, Wheatley, 68, a Salvation Army caseworker with a degree in counseling, talks frankly about his breakfast guests. They’re a mix, he says, with probably 30 percent physically or emotionally impaired and not able to hold jobs, and another 20 percent tagging along to help them. Probably less than 10 in this crowd of 150 or more are able to work full time now when outdoor jobs are scarce. Many won’t talk to me; one woman heads out before I can talk to her.

“There are people [here] who have enough money they could get an apartment but that’s not their culture. They want to be somewhere where they can talk, drink and play cards,” Wheatley says.

Some plain like life on the streets. Once, Wheatley says, he had a guy hand him a card that read, “I’m homeless. I don’t have to work, worry, be concerned about showing up for any job. When I need money I panhandle and I like it.”

Many are borderline personalities and are “brilliant, and they’ll talk deep issues,” he said. About 60 percent are African-American or African, 25 percent Hispanic and the rest white or Asian.

By 7:30 a.m. dynamo “Mama Helen” Ortiz, 75, and her kitchen crew are dishing out heaping spoonfuls of hot applesauce, sweet potatoes, taco rice casserole and good cheer to the crowd.

“She basically started the whole thing,” Dobler says about Ortiz, who used to be there every week day but has cut back some lately. Still, she always makes the soup.

“We try to give them a good meal,” Ortiz says, calling herself a “Mother Hen,” concerned about her guests’ welfare but never tolerating bad behavior. She won’t allow coarse language, yelling or fights, yet disagreements break out about once a month.

Once, trying to calm a ruckus, she was grabbed and thrown.

Guests arrive
This day guests shuffle in quietly, bundled in hooded sweatshirts and thick jackets, some dragging suitcases on wheels or balancing backpacks.

“Hello, how are you doing today? You made the right turn when you came here,” chirps a female volunteer on the food line.

This day, some 2% milk has soured. “Sorry about that,” Ortiz tells the gathering.

“It’s quite a community,” of regular diners and volunteers, she muses later, recalling how in the 20-some years she’s been cooking for the homeless many keep coming back. “We’ve also buried some,” she said, persons felled by cars or cancer or over-drinking. Friends request prayers in memory of the dead.

Last Christmas, the regular volunteers were joined by suburban church folk like those from King of Kings Lutheran in Roseville, armed with gifts. Over the years St. Paul Police have donated socks.

On the dining tables, napkin holders dispense both paper and messages like “Love thy neighbor.” The Salvation Army’s mission, after all, is “to preach the gospel of Jesus Christ and to meet human needs,” according to their website.

Correction: An earlier version of this article incorrectly reported the operating hours of the Dorothy Day Center.

Hot meals for the poor: Salvation Army in St. Paul dispenses nutrition for body and soul