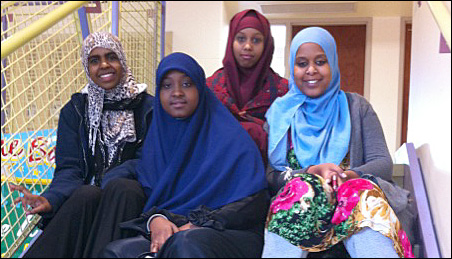 To a young Ethiopian-American woman I met not long ago, American politics isn’t quite working.

“Politics shows how much we cannot agree,” Ecram Abde, a junior at Higher Ground Academy in St. Paul told me when I stopped by. I wanted to meet a few of the girls who’ll be visiting the state Capitol today in connection with the ninth annual “Girls Rock! The Capitol.” Especially those of immigrant beginnings.

Although born in San Diego, Ecram, 17, comes from family rooted in Ethiopia. She is one of about 60 girls from all over the state to participate in a civics event that brings together tomorrow’s representatives of the people with today’s.

After all, as Ecram told me, “America is full of opportunities if you’re willing to work hard for it.”

Girls 13 to 18 will learn about the American brand of democracy, political leadership and activism — a political scene that Abde sees as muddied by discord.

Sponsors of the event are the Minnesota Women’s Consortium and Girls International Forum, and visitors this year include women from Bahrain, Yemen and the United Arab Emirates.

In a mock hearing, the young women will consider the merits of actual bills concerning such issues as lowering the voting age and requiring photo identification at the polls on Election Day.

It is programs such as this that encourage immigrants and the young to become active citizens, says Judy Stuthman, co-state president of the League of Women Voters Minnesota, an organization that makes civic engagement its business.

I met Stuthman, whose own grandparents came here from Denmark, at a naturalization ceremony this month in Minneapolis, an event where people from more than 30 countries shed those allegiances for the privilege of becoming Americans.

“We really want to make sure that civics is taught in the schools so people learn about democracy and our Constitution and the right to vote,” Stuthman said. “It all goes toward making better communities and a strong state.”

Making those connections to lawmakers as not so different from themselves — actually introducing students to legislators as is done in many of these programs — is something that is impossible in many countries around the world, Stuthman said.

Ecram and her friends will attend the Capitol event through WISE, Women’s Initiative for Self Empowerment. That organization offers Project Achieve, a college preparatory and enrichment program that Ecram attends at Higher Ground Academy.

Many of her classmates at Higher Ground, which bills itself as an “Afro-centric” school, or their families, started out life in African nations. They came to America to make better lives for themselves and their families.

Going with Ecram to the Capitol are three other girls, all of whom plan to earn their diplomas and then continue their schooling. At the moment, there isn’t a politician among them, although all agree on the importance of getting a good education. Here’s the tiniest bit of who they are:

• Ecram‘s mom speaks seven languages and works as an interpreter in hospitals.

• Saynab Omar, 18, born in Egypt of Somalia parents, has lived in America for more than a decade. She wants to be an optometrist. “My parents are very strict when it comes to education. No ‘Cs,’ not even a ‘B’ is allowed in my house,” Saynab tells me. Her mother has a nursing degree; her father, a pharmacist in Egypt, had to start a new career here, earning a college degree and now working for the Social Security Administration.

• Amal Said, 17, is a senior who came to America seven years ago from Somalia. She wants to train as a pastry chef or medical lab technician or perhaps a pharmacist after high school. About her parents she said, “They are working to get us to college.”

• Senior Sahra Ali is from Somalia and has lived here eight years. She dreams of working in health care. Her mother was not allowed schooling in Somalia, she said.