Stories of Latinos in America today, from immigrants to undocumented workers to a gay Chicano, are meant to entertain.

But that’s not all. When the curtains open Feb. 17 on the 10th Annual Political Theatre Festival presented by two metro theater companies, the broader goal is to encourage conversation and to build bridges between peoples.

And what better way to incite thought and discussion than to bring to the stage two provocative plays?

“Aliens, Immigrants & Other Evildoers” is a multi-media solo performance by award-winning artist Jose Torres-Tama, who satirizes the status of Latino aliens as “extraterrestrials” and examines Latino immigrants’ contributions to this country as well as hate crimes directed against them.

And “Gaytino!” actor Dan Guerrero’s one-man show uses music and monologue to reflect on growing up Chicano and gay. 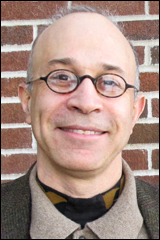 Alberto Justiniano, a Latino and founder of the festival, has been using theater to address issues of social justice, community, identity and immigration for a decade.

“We want,” says the artistic director of Teatro del Pueblo, “to build bridges within the Latino community and also between Latino and non-Latino.” Understanding between the cultures is more important than ever as the numbers of Latinos in the United States grows, as is a “creative dialogue around political issues,” he says.

This year Justiniano’s Teatro del Pueblo theater troupe from St. Paul’s West Side, in collaboration with Pangea World Theater in Minneapolis, shine the spots on Latinos in transition in a run Feb. 17-27 at the Gremlin Theatre, 2400 University Ave., St. Paul. Tickets are $15.

Theater has an historical partnership with politics, says Sonja Kuftinec, who teaches classes on 20th century theater and social change at the University of Minnesota. Take the industrial drama movement of the early 20th century, for instance, and examples of how theater arts were used to “assimilate people to an idea of American identity,” she said.

Corporations across the United States used theater as a way “to contain workers” by providing them with stage entertainment both to convey messages and also to keep them out of the bars, which “doubled as union halls,” Kuftinec said.

One of her “favorite moments” in that movement involved the Ford Motor Co. Ford put on a pageant, having all workers march across the stage in the dress of their country of origin. “They marched into a giant melting pot and came out all wearing Ford factory coveralls and waving American flags,” she said.

Theater can be used to “contain ways of thinking,” but it also can be used to “solidify a particular group or to create a distinctive kind of culture,” she said. “All sorts of interesting movement” arose in the cultural wing of the civil rights movement in the ’60s.

She said theater is used to tell the stories of groups of people and their communities, citing, for example, Penumbra and its ties to the African-American community, as well as Teatro del Pueblo. “We want to tell our stories and our ways to our people,” she said.

The play “Aliens,” running Feb. 17-19, highlights the importance of immigrants in this country and conveys to the audience something of what it is to be an immigrant, including both tragedy and humor, said Justiniano, a playwright, filmmaker and scriptwriter. “Some of it is funny, some of it is, ‘Wow, really, I didn’t realize that,”’ he said.

“Gaytino!”, which plays Feb. 25-27, prompts discussion of what is to be gay in a culture where “gay issues are still taboo,” Justiniano said.

Founding Teatro del Pueblo in 1992, Justiniano says the theater barely survived the economic recession, but not without laying off staff. It’s now resurging thanks to financial support from the Minnesota State Arts Board and several foundations.

Tickets for the performances, which include dialog in English and Spanish, are $15 and are available here or by calling 1-800-838-3006, with lesser rates for students and seniors. Teatro del Pueblo also performs for schools, libraries and community groups.

Other examples?
What do you think about the arts influencing social change? Do you have some favorite examples?

I recently watched the informative retrospective “Pioneers of Television” shown on tpt, and the program described several small-screen examples of TV’s influence in changing America. One of my favorites came out of the ’60s when Bill Cosby broke through the color barrier by playing a lead role as a globe-trotting secret agent in the dramatic television series “I Spy.” Ground-breaking it was, but being young, I didn’t realize it at the time.