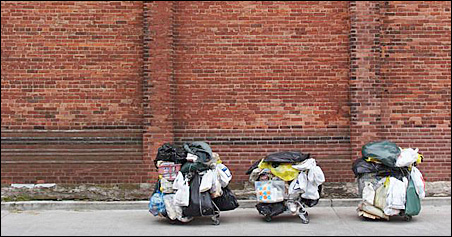 CORBIS/Marshall Sokoloff
Moving long-term homeless persons off the streets and into permanent, affordable housing saves about $13,000 in government services per person.

Given the shortfall in taxpayers’ and government’s budgets these days, a social service program that appears to be saving money and people seems worth looking into.

Called FUSE, it’s a program that moves long-term homeless persons off the streets and into permanent, affordable housing. These are folks who had made it a habit of ending up not only in homeless shelters but also in pricier overnight accommodations: jail, detox centers and medical facilities.

Because of its successful track record, the program is expanding this year.

“This is a really amazing program,” says Matthew Ayres, project manager for the Office to End Homelessness in Minneapolis and Hennepin County with Heading Home Hennepin.

The same faces
Seeing some of the same faces over and over at homeless shelters, in jail and in detox, Hennepin county officials in 2007 decided to sort out the numbers. Turns out, the same 266 individuals stayed about 70,000 nights in shelter, jail or detox over a period of five years at a cost of $4.2 million.

In other words, the same folks were constantly recycling through the system. Clearly, intervention was called for.

So, in April 2008, St. Stephen’s Human Services, a Minneapolis nonprofit with a long record of helping the homeless, was called in and their Kristen Brown became manager of what came to be called FUSE, short for the Frequent User Service Enhancement Program.

Begun to serve 50 people, the program was expanded last year to cover 75 and likely will take on five more this year, thanks to additional funding that pays for a new program coordinator and a case manager. Currently nine people await housing placement.

About 90 percent of participants are men, with 86 percent African American. All have problems of mental illness, chemical dependency or both and are on probation in the criminal justice system.

A way out
“People get stuck being homeless and can’t get out. People just don’t know a way out,” explains Brown, housing director at St. Stephen’s.

But FUSE was designed to show them the way. The program operates under a “housing first” model, meaning the idea is to get people into affordable housing and then to address their issues of mental illness or chemical dependency, or any other barriers to housing, Brown said. There are a few other similar programs around the nation.

The effort is supported by the Corporation for Supportive Housing, a private nonprofit, and Hennepin County, plus state money filtering in through Group Residential Housing and the Minnesota Housing Finance Agency to cover apartment rents.

The program operates with an annual budget of $560,000, some of which could be cut this year by legislators, Brown said. Some money was unalloted last year.

Cost savings
A preliminary study looked at six FUSE participants who had been placed in housing for a year and compared their “system use” before and after they were moved into apartments.

Those six people cost taxpayers about $95,000 in services before they were moved into housing and only $16,000 after. Having a permanent place to lay their heads, they less often ended up at the Adult Detention Center, the Adult Correctional Facility, in county-paid shelter or the emergency room at the Hennepin County Medical Center, for instance.

A subsequent, more comprehensive study by the University of Minnesota bore out the cost-savings results, Brown said.

“When you have nowhere to go during the day it’s much easier to get into trouble than when you have a home,” explained Brown, adding, “The longer people are in housing the better they do.”

“For us the big piece is that people’s lives really do change and are improved through housing and support services. It makes our communities better and safer and costs less money,” she said.

Comparing Costs
Brown said a night spent in a detoxification facility sleeping off chemicals, for instance, costs about $192, a trip to the ER about $2,800, a jail stay about $378 (including book fee the first night) and in shelter about $35.

To house a client in a city or suburban apartment costs as little as the “typical” $20 a day and as much as $40 a day, Brown said. The cost covers rent and services such as tenant education, mental and chemical health support and the services of a parole officer. Participants meet as often as weekly with a case manager to help them handle problems.

Those problems include difficulties in adjusting to apartment living, Brown said, with clients needing to reduce noise levels, for instance. Plus, “they have a difficult time saying no to their [street] friends who want to be in their place a lot,” she said.

A few clients haven’t so far been able to make the transition from the streets to housing in large part because many have been homeless for eight to 10 years, Brown said. Some other clients have weaned themselves of the program and use Social Security to pay rent, for instance.

FUSE is one piece in a broader, 10-year strategy to “break” rather than “manage” homelessness, says CathyTen Broeke, coordinator to end homelessness for Minneapolis and Hennepin County. This is year four.