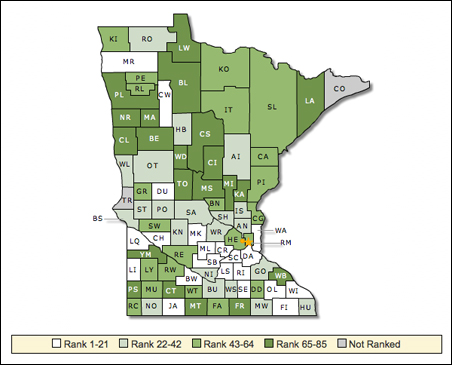 Though you may quibble with some of the conclusions in the 2011 County Health Rankings out today, you’re bound to find the stats compelling.

Take Cass and Beltrami, both poor northern Minnesota counties with high concentrations of Native Americans. The study, a kind of annual checkup of nearly every county in the nation, declares Cass the unhealthiest in Minnesota, though it seems Beltrami could just as easily take that distinction.

• Cass County has 14.5 percent of its population living below the poverty line, according to available U.S. Census data, and has 22 percent of its adults smoking, 28 percent adult obesity, 20 percent excessive drinking, 67 percent having access to healthy foods, according to the new study.

Both counties have more persons of color than the state as a whole. Statewide, we’re 88.6 percent white, Cass is 86.3 percent and Beltrami is 75.99 percent white.

It is that sort of digging-deeper discussion researchers hope to ignite with the rankings released by the University of Wisconsin Population Health Institute and the Robert Wood Johnson Foundation.

You know how investors keep an eye on the Dow Jones?

“…[W]e think communities should take a similar approach every year, have an annual checkup to see areas where they are struggling related to health behaviors,” Dr. Patrick Remington told me. Remington is associate dean for public health at the University of Wisconsin’s School of Medicine and Public Health.

It really doesn’t matter a lot which individual county is the very healthiest or very unhealthiest, he said, adding that there are only slight differences between Beltrami and Cass, though morbidity rates are higher in Cass. What’s important, he said, is to turn the public spotlight on health.

In the study, counties are ranked according to both health outcomes, such as the rate of people dying before age 75, and health factors, which include health behavior and social and economic factors.

“There is no question if you lined up the counties that are at the bottom of the ranking they have high rates of poverty, unemployment, low education — those factors highly correlated with high-risk behaviors and not having insurance.”

Declared our healthiest county, according to the study, is La qui Parle, on our South Dakota border.

La qui Parle, a small county with incomplete statistics, nevertheless has, at 98.7 percent white, a homogenous population with only 8.9 percent of the population living below the poverty line and a median household income of $43,335, compared to Cass’ $41,740 and the state median of $57,318.

Cass County has nearly three times the teen birth rate of La qui Parle and more than four times the rate of sexually transmitted infection, according to the study.

Dr. Risa Lavizzo-Mourey, president and CEO of the Robert Wood Johnson Foundation, hopes the rankings help show that what happens outside the doctor’s office and where people live influence health and that the study will spur action and programs to improve health.

“The rankings not only shine a light on the health of individual counties; they also demonstrate the need to include prevention in our health reform efforts,” Minnesota’s Commissioner of Health Dr. Edward Ehlinger said in a news release Tuesday.