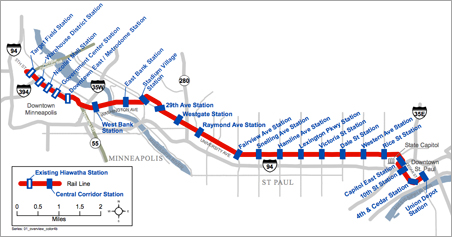 Eve Swan’s roots in the historic Rondo neighborhood of St. Paul run deep. As a child, she ran across the street from her two-story stucco home to the Jimmy Lee Rec Center along North Lexington Parkway to ride her bike and join in after-school craft activities.

Now she both lives in and operates her own beauty salon out of that house on Concordia Avenue, maintaining her neighborhood connection for almost five decades and determined to not let the Central Corridor Light Rail Transit line sever it.

Swan fears gentrification, the sweeping in of a new, wealthier order and wide displacement of her many working-class neighbors as well as small, independent, minority-owned businesses like hers and those on nearby University Avenue, which she patronizes regularly. “This is how we make our living.”

“I’m concerned people will be taxed out of their properties because of light rail and new construction,” said Swan, an African-American and one of about a dozen members of the Save Our Homes Coalition.

Her fears appear real, judging from a new study due to be released online today by the Healthy Corridor for All Coalition. Perhaps not surprisingly, the study reveals “serious potential threats to the 1,068 small businesses on the Corridor, as well as to health, housing and job access for the large low-income and minority communities in the area.”

“People are already on the tipping point of not being able to live on the corridor,” says Kate Hess Pace, project director of the draft study.

Home values are increasing significantly — up 77 percent in the last decade — and higher than city or county increases, according to the report, she says.

Further, the study shows a steady spike in the proportion of households paying more than 30 percent of their income on rent. Couple that with the fact that neighborhoods along the St. Paul side of the LRT line have higher percentages of lower-income residents than either the city of St. Paul or Ramsey County.

The study, a survey of mostly government data, is intended to help guide decisions concerning construction of the LRT line and zoning decisions, Hess Pace explains. The work was released at a community meeting Saturday.

“We’re not anti-light rail at all,” she says. “In fact, we’re looking at how this could bring opportunities to the people. The definition of success is keeping people in their homes and keeping businesses that are already there and improving the quality of life along the corridor as well.”

To that end the study uses a Health Impact Assessment to consider the effect of the LRT line moving into and along neighborhoods from downtown St. Paul toward downtown Minneapolis. Healthy surroundings, good jobs, secure homes and safe transportation make for a healthy community and citizenry, according to the concept.

Take into account that neighborhoods are more diverse along this line than either the city of St. Paul as a whole or Ramsey County, with a 53 percent white population and the poverty rate, at 27 percent in 2009, exceeding St. Paul (20 percent) and Ramsey County (14 percent).

The approach is a “unique public health initiative” that involves community and government, new state commissioner of health Ed Ehlinger, says. If done well, the LRT line “will really enhance the health” of the community, the physician and public health expert said.

He characterized the approach as a way of giving the community the information needed to “become engaged and take ownership of some of the policy decisions that are going to be made.”

He was quick to mention, as well, the state Department of Health’s two year LRT study, which documents the health of those living along the LRT route.

Behind the Healthy Corridor for All study is an activist coalition led by ISAIAH, a faith-based organization of 90-member congregations, TakeAction Minnesota’s Hmong Organizing Program, and the national research and policy institute PolicyLink, as well as 22 other organizations reflecting diverse constituencies along the line.

That analysis — one of several which have been or are being conducted — includes only the St. Paul side of the LRT route, roughly the line heading east from about University Avenue and Minnesota Highway 280 in the Midway area to downtown St. Paul.

Other findings
Among other findings in the study, funded with a grant from the Health Impact Project, a collaboration of the Robert Wood Johnson Foundation and The Pew Charitable Trusts, are these:

• Jobs are a concern, Hess Pace said, because there is a “mismatch” between available jobs and the educational qualifications of persons living nearby. Forecasts suggest jobs expansion will be in retail shops as well as offices, the first often providing less than a living wage and the second category requiring college degrees, which most nearby residents do not have. More than 60 percent of all jobs in St. Paul are located on the corridor.

• The impact on local business could be serious, according to the study. The area is a growing medium for many small and minority-owned businesses, which are typically “more disadvantaged than their white-owned and large counterparts,” the report suggests, and thus more likely to be disrupted by a major development project such as the LRT line. Eighty-six percent of organizations along the route are small businesses, with 13 percent minority-owned.

• Unemployment among residents in these neighborhoods is tallied at 9.9 percent (in contrast to 7.6 percent in Ramsey County) with 37 percent of households earning less than 150 percent of the poverty line for a family of three.

The study is based on data from the 2010 U.S. Census, the American Community Survey, the Bureau of Labor Statistics and some original research and was analyzed by PolicyLink.

Speakers at the Saturday meeting urged that the LRT better the community.

“Black, Vietnamese, Hmong, Somali, Latino and white, we all live here, play here, do business here, pray here, cry here, love right here on the central corridor,” said Liz Xiong, a member of the Health Corridor for All Steering Committee and leader in Take Action Minnesota’s Hmong Organizing Program. “It has always been a place we can relate to and afford, and we need to make sure it stays that way.”

Added Doran Schrantz, executive director of Isaiah: “Success for the light rail must mean that the people who live and work on the corridor also reap the benefits of this huge public investment.”

As for LRT corridor resident Swan? She’s not angry about the light rail. “We just want to share. We want to stay here and enjoy the light rail coming through,” she said.