A post I wrote the other day got me thinking about nonprofits, and from there about charitable giving and how philanthropy fits into the current scene playing out in state and federal government these days involving gaping shortfalls and a slippery economy.

Certainly in the last couple of years, some grant makers — those foundations and corporate-giving programs that dole out dollars to nonprofits — have been able to step up in additional ways to ease the human suffering caused by lost jobs and homes.

Take, for example, the Community Economic Relief Fund organized by the Minnesota Community Foundation and The Saint Paul Foundation along with key partners. Also, there’s the Bremer Emergency Fund, stemming from The Otto Bremer Foundation.

And now, of course, there’s a lot of serious talk — at both state and federal levels — of cutting back government programs to help the needy because of budget problems.

All of which prompts this question: Can charity plug the holes left by government and fill the needs inflicted on people by the tsunami-like recession?

“That’s not the role of philanthropy in our society,” emphatically says Bill King, president of the Minnesota Council on Foundations. “That’s why we pay taxes. Philanthropy is not a gap-filling function for government.”

‘We’re like nickels’
Education grant making, for example, is equal to only 3 percent of what state government pays toward education, he says.

“We’re like nickels compared to what the government puts into the community,” Jerry Timian, program officer with the Minnesota Community Foundation and the Saint Paul Foundation, told me in another conversation. 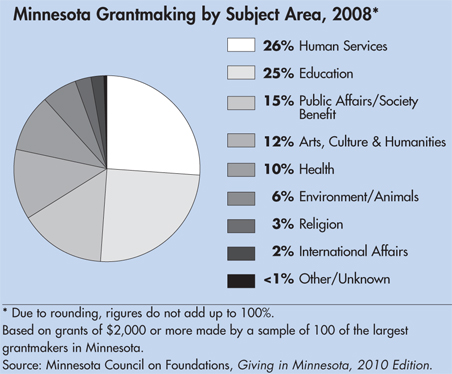 Foundations and their peers do consider the economy and public policy, which is why the Minnesota Council on Foundations’ recent, more positive 2011 Outlook Report is interesting.

At the end of 2009, 21 percent of the foundation and corporate-giving members of the council participating said they might make some changes in the short-term giving in response to the economy. The end of 2010, only 11 percent anticipated making changes related to the state of the economy.

Bremer Foundation trustee Charlotte Johnson says her foundation is spending down its 2011 emergency grant fund — money that went to nonprofits already working with people and their basic needs including heating, housing, food and transportation.

Yet, folks at The Saint Paul Foundation, where there’s also another pot of emergency money available every year (The Community Sharing Fund), aren’t resting easy.

“It’s very clear that while on paper government economists can say the recession is over,” says Claire Chang, the foundation’s associate vice president of grants and programs, “the reality in our work is” the recession is still being felt at the grassroots, in neighborhoods.

Women losing jobs
They’re still seeing, for instance, the need for emergency assistance grants in Washington, Ramsey and Dakota counties to help people avoid foreclosure on their home mortgages and the need for assistance to rapidly re-house people forced out of their homes.

“We’re seeing more women losing jobs than before,” adds Timian, as they start to see layoffs impacting workers in city, county and state government and education.

Just look on the East Side of St. Paul, he suggested, and see a large number of empty and abandoned homes.

Their Community Sharing Fund puts out about $700,000 a year in small, timely grants to nonprofit groups helping low income people with medical, housing, and emergency needs, such as losing a job and thus health benefits. That private money is added to the money put in by government.

Say both parents in a family with young children lose their jobs. Working through social workers at nonprofits they fund, the foundation money could, for instance, pay for that family’s $700 monthly rent to keep the family in housing and help keep kids in school.

When public dollars decline, it “really starts to erode the safety net structure and basic infrastructure for everybody,” Chang says.

Helping the needy: philanthropy can only do so much